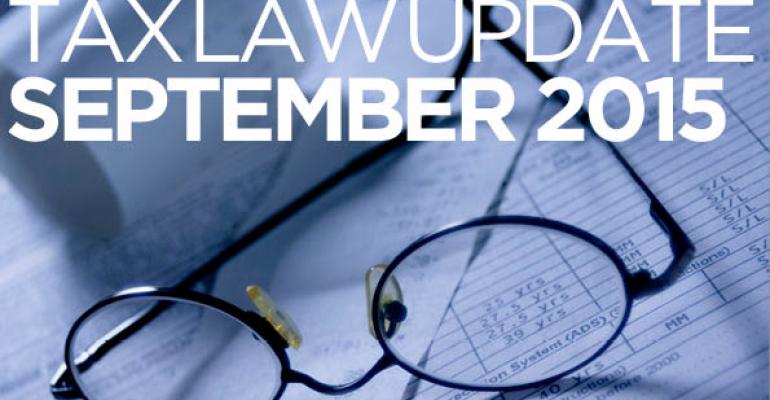 Arthur Schaefer established two NIMCRUTs, each of which held a 49.5 percent interest in a limited liability company, which owned interests in another family-owned entity. Each of the NIMCRUTs provided payments to the income beneficiaries of the lesser of: (1) the net trust accounting income for the taxable year, or (2) a fixed percentage of the value of the trust assets. The fixed percentage was 11 percent for one trust and 10 percent for the other. The payments were to be made for the longer of 20 years or until the death of the last income beneficiary. Arthur was an income beneficiary of each trust; he also designated one of his sons as the successor income beneficiary of each of the NIMCRUTs. At termination, the property was payable to charity.

After Arthur’s death, his estate filed an estate tax return that included the value of the property in the NIMCRUTs reduced by the amount of the remainder, which the estate calculated to be a charitable transfer. The Internal Revenue Service issued a notice of deficiency, stating that the remainder interest wasn’t eligible for an estate tax charitable deduction.

Internal Revenue Code Section 2055 states that estate tax deductions are allowed for transfers for charitable purposes, but no deduction is allowed for split interest transfers other than charitable remainder annuity trusts, charitable remainder unitrusts (CRUTs) or pooled income funds. Under IRC Section 664(d)(2)(D), for the remainder interest in a CRUT to be eligible for a charitable deduction, the value of the remainder interest must be at least 10 percent of the property’s net fair market value (FMV) on the date of contribution. The IRS and the estate differed as to the method of calculating the value of the remainder interest. The estate argued that the calculation should be made using the IRC Section 7520 rate to determine the payments to the income beneficiaries, as long as it’s above 5 percent. The IRS argued that the distribution rate should be equal to the maximum fixed percentage stated in the trust (11 percent or 10 percent, respectively).

The court acknowledged that the statute wasn’t clear and neither method was guaranteed to be accurate, as the amount ultimately paid to the charity couldn’t be predicted. Because the statute was ambiguous, the court looked to the regulations and legislative history, as well as administrative guidance, such as prior revenue rulings and revenue procedures (Revenue Ruling 72-395 and Revenue Procedure 2005-54). Based on these sources, the court determined that the calculation had to be made based on the fixed percentages, without regard to the possibility that a lesser amount would be distributed based on the trust income. Calculating the remainder using the fixed percentage amounts, the NIMCRUTs failed the 10 percent requirement, and no estate tax charitable deduction was allowed.

John A. Pulling, Sr. died owning three parcels of real estate in Collier County, Fla. In addition, he held a minority (28 percent) interest in a trust, Temple Citrus Land Trust (TCLT), which owned two other larger parcels. John’s family members, friends and several unrelated parties owned the remaining interests in TCLT. John’s family members, together, owned more than 50 percent of the interests in TCLT. The parcels had limited access to roads, and some of them also presented issues for development for other reasons, due to their shape, lack of access to utilities or other geographical features.

In 2004, John hired an appraiser to value the parcels in connection with a gift of interests in TCLT. The appraiser treated all of the parcels owned by John and TCLT as if they were a single, large tract. He valued the three parcels owned by John at $990,000, $130,000 and $1.25 million (a total of $2.37 million) respectively. The estate hired the same appraiser again to appraise John’s three parcels as of John’s date of death on April 17, 2005. This time, the appraiser valued the parcels as being separate from those owned by TCLT, and he valued two of the parcels, together, at $340,000 and the third parcel at $600,000 (a total of $940,000).

The court was asked to determine whether the parcels should be valued individually or if they could be considered as part of a larger block along with the parcels owned by TCLT. The court stated that a property’s FMV may reflect not only its present use, but also other uses to which it could be converted. And, if an alternate use of the property is only feasible if it’s combined with other properties, that alternate use can only be considered if there’s a reasonable probability of the combination.

The court found that it wasn’t reasonably likely that the estate’s parcels would be combined with the parcels owned by TCLT. TCLT had rejected prior offers to purchase its property, and the estate’s minority interest in TCLT wasn’t sufficient to control a decision to combine the parcels. In addition, the court refused to attribute other family members’ interests in TCLT to the estate or assume that they would be able to control TCLT. Therefore, the court found that the parcels had to be valued individually, and it upheld the estate’s valuation.