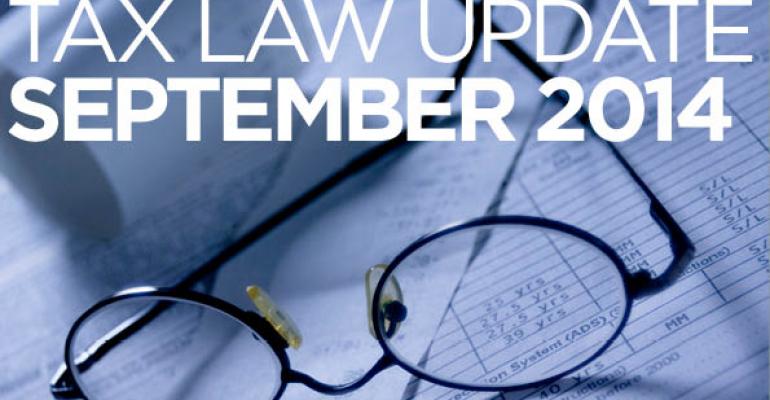 • Treasury extends effective date of regulations under Internal Revenue Code Section 67—Final regulations (Treasury Regulations Section 1.67-4) were enacted in May under IRC Section 67 regarding the deductibility of miscellaneous expenses subject to the 2 percent floor. Those regulations were originally effective for taxable years beginning on or after May 9, 2014. However, taxpayers filed complaints with the Internal Revenue Service, stating that non-grantor trusts established after May 9, 2014, estates of decedents dying after May 9, 2014 and existing estates with fiscal years beginning after such date, would be immediately subject to such rules without time to adjust and implement changes necessary for compliance. As a result, the Treasury amended the regulations (79 FR 41636, July 17, 2014) so that they’re now effective for taxable years beginning after Dec. 31, 2014.

• Private letter ruling finds personal representative substantially complied with generation-skipping transfer (GST) tax allocation—In PLR 201423014 (Feb. 26, 2014), the IRS ruled on whether the personal representative of a decedent’s estate substantially complied with the requirements of the IRC to allocate a GST tax exemption to three direct skips and a trust intended to be GST tax-exempt.

The decedent’s will provided for a pecuniary bequest to each of three skip persons and allocated the balance of her available GST tax exemption to a GST trust; the rest of her estate was held in a non-GST trust. The personal representative of her estate hired an accountant to prepare the Form 706. On Schedule R, the accountant made a mathematical error in allocating the exemption to the direct skips and failed to list the GST trust on Part 1, Line 9 (where trusts to which a decedent allocates GST tax exemption should be described and the inclusion ratio calculated).

Under the Treasury regulations, an individual or his executor may allocate the individual’s GST tax exemption at any time from the date of transfer until the date a federal estate tax return is due (or would be due). Under IRC Section 2632(e)(1), any portion of an individual’s GST tax exemption that hasn’t been allocated within the required time is deemed allocated under the automatic allocation rules to: (1) direct skips, and (2) trusts to which the individual is the transferor and from which a taxable distribution or taxable termination might occur. Under IRC Section 2642(g), in determining whether an allocation of GST tax exemption has been made due to substantial compliance, all relevant circumstances are to be taken into account, including evidence of intent contained in the trust instrument or instrument of transfer and such other factors as the Secretary deems relevant.

The IRS ruled that there was sufficient evidence that the personal representative intended to allocate the decedent’s GST tax exemption to fully exempt the three direct skips. In addition, even though the GST trust wasn’t listed on Schedule R, the IRS concluded that the Form 706 contained sufficient information to constitute substantial compliance with the requirements of the IRC to allocate the remaining GST tax exemption to the GST trust.

This ruling isn’t entirely helpful in that it doesn’t describe what evidence or information was included with the return that showed the personal representative’s substantial compliance. It’s possible that the terms of the decedent’s will and testamentary trusts supplied the necessary evidence itself or that the evidence was the fact that it was called the “GST trust.” Regardless, it’s a good reminder to be explicit and fastidious regarding GST tax allocations on Schedule R.

Under IRC Section 101(a)(2), proceeds from life insurance aren’t included in the gross income of a recipient unless the insurance has been transferred for value. If so, the exclusion from gross income only applies to the extent of the consideration (and any further premiums) paid by the recipient. This transfer-for-value rule, however, doesn’t apply when the life insurance contract in the hands of the recipient has a carryover basis.

The IRS analyzed the transaction as having two parts. First, there was a transaction between Wife, as a grantor of Trust 1, transferring the insurance to Wife, as grantor of Trust 2. The PLR explained that this transaction isn’t a sale or exchange, as Wife was treated as the income tax owner of both the seller and the purchaser.

Second, there was a transaction between Husband, as a grantor of Trust 1, transferring the insurance to Wife, as grantor of Trust 2. Under IRC Section 1041(a), there’s no gain or loss on transactions between spouses, and the property transferred shall be treated as acquired by the transferee by gift, with a carryover basis. The IRS applied Section 1041(a) to the transaction and held that the transfer from Husband to Wife should be treated as a gift with carryover basis and, as a result, was outside of the transfer-for-value rule.

Therefore, overall, the transaction was deemed to meet the exception to the transfer-for-value rule. It was interesting that the rulings broke down the transactions into two parts, occurring separately between the two spouses.

• PLR finds marital trust division and termination don’t result in gain or loss—In PLR 201426016 (March 11, 2014), the IRS ruled on a series of transactions involving the division of a marital trust established for a decedent’s surviving spouse. The decedent and surviving spouse had six children. The spouse and two of the children served as trustees of the marital trust. As trustees, they proposed: (1) dividing the marital trust into three separate trusts, (2) leaving one resulting trust as is, (3) converting one resulting trust into a total return trust, and (4) petitioning a court to terminate the third trust and distribute the assets equally to the children, subject to the children paying any gift taxes related to the transaction. State statutes permitted these actions. The family sought a ruling to confirm the tax consequences, namely that the resulting trusts would still qualify as qualified terminable interest property (QTIP) trusts, there would be no gain or loss recognized on the division of the trusts or the conversion to a unitrust and that the termination of the third trust wouldn’t adversely impact the other trusts.

First, the IRS confirmed that dividing the trusts wouldn’t interfere with any of the trusts’ QTIP status. Second, it confirmed that the termination of the third trust wouldn’t impact the other two. Under IRC Sections 2511 and 2519, the spouse was deemed to make a gift of the entire value of the third trust, reduced by the amount of the gift tax paid by the children. However, the termination wouldn’t cause the spouse to be treated as making a gift or a transfer of any interest with respect to the other two trusts. Therefore, IRC Section 2702 wouldn’t apply with respect to the transfer. In addition, as the spouse was making a gift of her interest under Section 2519, the assets held in the trust wouldn’t be includible in her estate under IRC Sec-
tion 2044 because of the exception in Section 2044(b)(2) for property subject to Section 2519.

The IRS confirmed that the conversion of the second trust to a unitrust pursuant to state law wouldn’t be deemed a gift or other disposition of any interest in the trust to the remainder beneficiaries.

Lastly, the IRS ruled that the transactions wouldn’t cause the marital trust to recognize gain or loss under IRC Section 1001. Based on prior revenue rulings providing that partitions of jointly owned property aren’t sales or dispositions because the owners don’t acquire new or additional interests, the IRS held that there was no gain or loss recognized on the division of the marital trust because the interests of the beneficiaries didn’t differ materially as a result of the division. In addition, the conversion of the second trust under state law to a unitrust wasn’t subject to Section 1001 because Treasury regulations provide that switching methods of determining trust income authorized by state statute won’t constitute a recognition event. There was no ruling regarding whether gain or loss would be recognized with respect to the termination of the third trust.

• Spouse allowed to roll over individual retirement account distributed from marital trust to her own IRA—In PLR 201423043 (Feb. 15, 2014), the IRS ruled on a taxpayer’s distribution of Roth IRA accounts from a marital trust. The taxpayer was the sole trustee of the marital trust, which allowed distributions as the trustee deemed desirable for her “support, comfort and welfare in her accustomed manner of living” or “for any other purpose the trustee believes to be for the taxpayer’s best interests.” The trustee could distribute property in cash or kind. As the sole trustee, the taxpayer proposed to distribute two Roth IRAs to herself so that she could roll them over to IRAs in her own name.

Under IRC Section 408(d)(3)(C), inherited IRAs may not be rolled over. Inherited IRAs are IRAs obtained by an individual other than the IRA owner’s spouse, as a result of the death of the IRA owner. Generally, if an IRA is payable to a trust and then the trustee pays it out to a beneficiary (including a surviving spouse), the beneficiary is treated as having received the IRA from the trust, not the owner. In such a case, the IRA would be treated as an inherited IRA; therefore, it wouldn’t be eligible for roll over.

However, the IRS explained that the general rule won’t apply if the surviving spouse is the sole trustee of the owner’s trust and has the sole authority and discretion to pay the IRAs to herself. In this circumstance, the surviving spouse was permitted to roll over the IRAs into a Roth IRA in her own name, which, presumably, allowed her to avoid having to take minimum required distributions during her life and to name her own beneficiaries of the IRA.