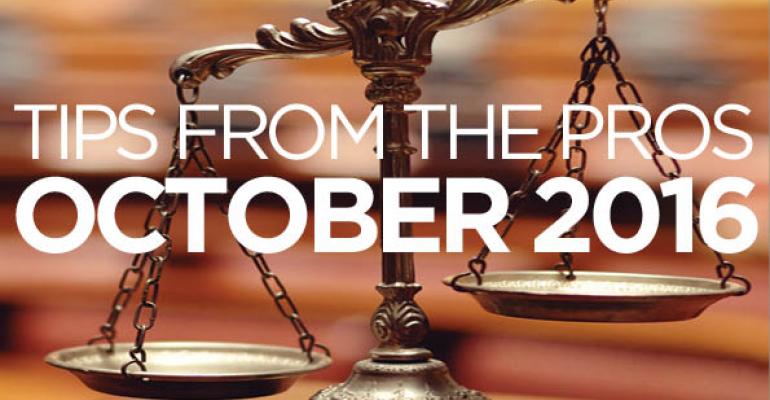 • New revenue procedure allows do-it-yourself process to complete a rollover despite missing the 60-day deadline—In Revenue Procedure 2016-47, the Internal Revenue Service created a do-it-yourself process that may allow taxpayers who were unable to complete a rollover from one retirement plan to another within the required time to implement the rollover without it being considered a taxable distribution.

A distribution from a retirement plan is taxable unless it’s rolled over to the same or another retirement plan within 60 days. If a taxpayer misses making the rollover within the 60-day period, historically there have been only limited means of rectifying the mistake. Most recently, the only way to do so was seek a waiver from the IRS by filing a request for a private letter ruling, which is a slow, expensive and burdensome process.

Now, under Rev. Proc. 2016-47, a taxpayer who’s missed making the rollover within the required 60 days can certify to the plan administrator that he was unable to do so for certain reasons. The plan administrator can rely on that certification alone and then accept the rollover. To qualify, certain requirements must be met. First, the taxpayer may not have previously been denied a waiver for the distribution. Second, the reason for the missed deadline must be one of 11 listed reasons. Lastly, the taxpayer must complete the rollover as soon as practicable (and within 30 days will be deemed in compliance).

The reasons that justify the self-certification waiver are:

(2) the distribution, having been made in the form of a check, was misplaced and never cashed;

(3) the distribution was deposited into and remained in an account that the taxpayer mistakenly thought was an eligible retirement plan;

(5) a member of the taxpayer’s family died;

(7) the taxpayer was incarcerated;

(8) restrictions were imposed by a foreign country;

(10) the distribution was made on account of a levy under Internal Revenue Code Section 6331, and the proceeds of the levy have been returned to the taxpayer; or

(11) the party making the distribution to which the rollover relates delayed providing information that the receiving plan or individual retirement account required to complete the rollover despite the taxpayer’s reasonable efforts to obtain the information.

The revenue procedure provides a sample letter for taxpayers to use. The certifications are subject to audit, and while the taxpayer may treat the distribution as a rollover until further notice, the IRS may ultimately determine that the distribution didn’t meet the requirements and assess penalties. Still, this process will be a great help for taxpayers who’ve been unable to complete rollovers within the 60-day period for administrative errors, which are often the culprit interfering with timely rollovers.

• IRS rules on grantor trust status of trust distributing assets to other trust—In PLR 201633021 (released Aug. 12, 2016), a decedent established a trust (Trust 1).
After the decedent’s death, the trustee of Trust 1 proposed to transfer funds to a new trust (Trust 2). The distribution to Trust 2 was authorized by the trust agreement governing Trust 1. The beneficiaries of the two trusts were the same, and their beneficial interests were the same (it isn’t clear what purpose the transfer served). According to the PLR, Trust 1 retained the power to revest the net income of Trust 2 in Trust 1. The trust agreement governing Trust 2 provided that income includes dividends, interest, fees or other amounts characterized as income under certain sections of the IRC and net capital gains.

Under the grantor trust rules of IRC Section 671 and the Treasury regulations thereunder, when there’s a gratuitous transfer of property between trusts, the grantor of a transferor trust will generally be treated as the grantor of the transferred trust. However, under IRC Section 678, a person other than the grantor is treated as the owner of the trust if the person has a power to vest the corpus or income of the trust in himself or such person has partially released or modified such a power, and, after the release or modification, retains control, which, under the other provisions of the IRC, would cause him to be considered the owner.

The PLR held that Trust 1 was treated as the owner of that portion of Trust 2 over which it had the power to withdraw. Under the regulations, if that power is only over income (as it was here), the person with the power is taxed as a current income beneficiary. As a result, Trust 1 will take into account those items that would be included in computing the tax liability of a current income beneficiary of Trust 2. In addition, since
Trust 2’s trust agreement allocated capital gains to income, it would be included in the calculation of income traceable from Trust 2 to Trust 1 under IRC Section 643.

• IRS releases 2016-2017 priority guidance plan— On Aug. 15, 2016, the IRS released its priority guidance plan for the upcoming year. These show those issues on which the Department of Treasury plans to focus its resources during the 12-month period from July 2016 through June 2017. The Treasury plans to work actively on these issues, but there’s no deadline or other guarantee that the projects will be completed this year.

The items on its list relating to estates, gifts and trusts are as follows:

2. Guidance on the definition of income for spousal support trusts under IRC Section 682.

3. Guidance on the basis of grantor trust assets at death under IRC Section 1014.

4. Final regulations under IRC Sections 1014(f) and 6035 regarding consistent basis reporting between an estate and a person acquiring property from the decedent. Proposed and temporary regulations were published on March 4, 2016.

5. Revenue procedure under IRC Section 2010(c) regarding the validity of a qualified terminable interest property election on an estate tax return filed only to elect portability.

7. Final regulations under IRC Section 2032(a) regarding imposition of restrictions on estate assets during the six-month alternate valuation period. Proposed regulations were published on Nov. 18, 2011.

8. Guidance under IRC Section 2053 regarding personal guarantees and the application of present value concepts in determining the deductible amount of expenses and claims against the estate.

9. Guidance on the gift tax effect of defined value formula clauses under IRC Sections 2512 and 2511.

10. Guidance under IRC Sections 522 and 2055 regarding the tax impact of certain irregularities in the administration of split-interest charitable trusts.

11. Regulations under IRC Section 2704 regarding restrictions on the liquidation of an interest in certain corporations and partnerships (already released this summer).

12. Guidance under IRC Section 2801 regarding the tax imposed on U.S. citizens and residents who receive gifts or bequests from certain expatriates. Proposed regulations were published on Sept. 10, 2015.