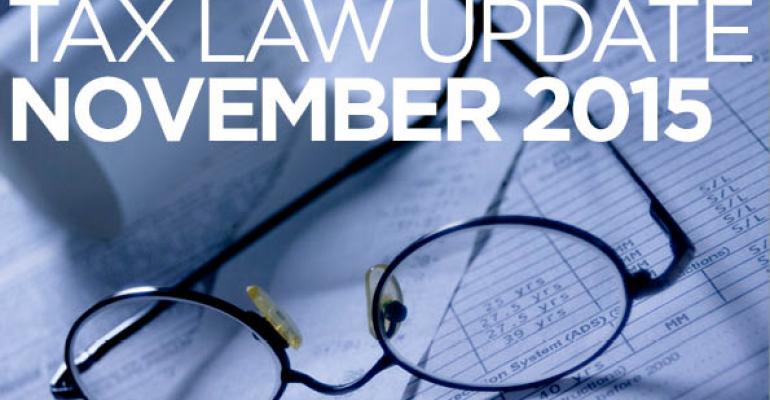 • Proposed regulations regarding tax imposed on U.S. citizens and residents relating to gifts and bequests from certain expatriates—The Internal Revenue Service has published proposed regulations under Internal Revenue Code Section 2801 (REG 112997), which imposes a tax on gifts and bequests received by U.S. citizens and residents from certain expatriates. This tax is intended to try to prevent the loss of tax revenue from expatriates who move to avoid U.S. gift or estate tax. It applies to any transfer that meets the definitional requirements, regardless of whether the property transferred was acquired by the donor or decedent before or after expatriation.

A “covered expatriate” is a person who’s expatriated on or after June 17, 2008 and who, on the date of expatriation: 1) had an average annual net income of at least $124,000 for the previous five years, 2) had a net worth of at least $2 million, or 3) failed to certify under penalty of perjury that he’s complied with all U.S. tax obligations for the five preceding taxable years. If a person meets this definition at the date of expatriation, he’s deemed to be a “covered expatriate” for all times after the expatriation date, except for any time when he’s subject to U.S. estate or gift tax.

There are certain exceptions to the tax. No tax is due if the property transfer is reported on an expatriate’s timely filed gift tax return or estate tax return, and the gift or estate tax is paid. There are also exceptions for property transfers resulting from a qualified disclaimer by an expatriate, charitable donations and transfers that would qualify for the marital deduction if transferred by a U.S. citizen or resident.

The tax is calculated based on the fair market value (FMV) of the covered gift/bequest on the date of its receipt by the U.S. citizen or resident. A gift is deemed received when it’s given, and a bequest is deemed received on the date it’s distributed from the estate or decedent’s trust (or, if passing by operation of law or beneficiary designation, the date of the decedent’s death). The amount of the tax is calculated, after taking into account an annual exclusion, using the highest estate or gift tax rate in effect for that year. Credits for taxes paid to a foreign country may be applicable.

The U.S. taxpayer may file a protective Form 708 if he reasonably concludes, after exercising due diligence, that the gift or bequest received isn’t covered and subject to the tax under Section 2801. The IRS expects to release Form 708 once it finalizes the regulations.

Additional guidance is also provided regarding the income tax basis of transferred property and how the generation-skipping transfer tax applies, as well as rules for foreign trusts electing to be treated as domestic trusts and charitable remainder trusts.

The tax under Section 2801 requires advisors to make sure their clients are well advised regarding the tax liability imposed on them relating to property received from foreign persons. The regulations and tax law concerning transactions between foreign persons continues to become complex.

Thus, expatriation may avoid future U.S. income taxes, but gifts and bequests by an expatriate to a U.S. person may still be subject to transfer taxes.

• Tax Court upholds valuation of net gift reduced by assuming liability for potential estate taxes for donor under IRC Section 2035(b)—In Steinberg v. Commissioner, 145 T.C. No. 7 (Sept. 16, 2015), the IRS disputed the valuation of a net gift made by Jean Steinberg to her daughters. In April 2007, at the age of 89, Jean agreed to make gifts to her four daughters, worth nearly $110 million in total. In their agreement (for which the daughters had separate counsel), the daughters agreed to pay the gift tax liability related to the gifts. In addition, they agreed to pay any estate tax liability under Section 2035(b) later imposed on Jean’s estate if she died within three years. When they signed the agreement, each daughter transferred $10 million to an escrow fund. Of the $40 million, a little over $32 million was used to pay the federal gift tax, and the remaining amount (nearly $8 million) was held to pay for the Section 2035(b) liability, if necessary.

Jean hired a qualified appraiser to value the FMV of the gift. He valued it at a little over $71 million—the value of the assets conveyed by Jean reduced by the liabilities assumed by the daughters. He discounted the estate tax liability under Section 2035(b) because it was contingent on Jean dying within three years. The discount was calculated by using the tables under IRC Section 7520.

The IRS issued a notice of deficiency, increasing the gift tax by almost $2 million and disallowing the discount for the Section 2035(b) liability.

The Tax Court held that the assumption of the Section 2035(b) liability was one that a willing buyer and willing seller would take into account, and so it was proper to account for it in the determination of the FMV of the gift. Analogizing to the case law supporting discounting the value of an interest in an entity with built-in capital gains or subject to transfer restrictions, the Tax Court held that the assumption of the estate tax liability was a detriment to the daughters and a benefit to Jean. The IRS argued that New York’s apportionment law would have imposed the burden on the tax to the daughters anyway, as beneficiaries of the residue of Jean’s estate. However, the court noted that Jean could have imposed a different apportionment scheme in her will, and she could have changed the beneficiaries of the residue of her estate—regardless, the net gift agreement provided an enforcement mechanism for Jean’s estate to obtain reimbursement for the tax.

The IRS conceded that the estate tax liability under Section 2035(b) wasn’t too speculative to be considered for gift tax purposes, and the court found the appraiser’s valuation persuasive and the use of the Section 7520 tables reasonable.

• Private Letter Ruling upholds spouse’s disclaimer of interest in trust—In PLR 201540006 (released Oct. 2, 2015), a wife’s disclaimer of an interest in an already existing trust for her husband’s benefit was upheld. An irrevocable trust (Trust 1) for the benefit of the husband was established before the wife was born. The terms of the trust provided for net income distributions to the husband, provided that if he gets married, one half of the trust income will be paid to his wife. If he dies and his wife survives him, she’s entitled to all the income for her life, after which the income is to be paid to the husband’s children. On the termination of the trust (based on the lives of certain family members), all trust property is to be paid to a foundation.

Prior to marrying his wife, the husband established an irrevocable trust (Trust 2) for the wife’s benefit that provided for certain distributions to be made to her if she were living with him. However, the trust instrument also provided that if she were to marry the husband without disclaiming her interest in Trust 1, Trust 2 would terminate, and the property would be distributed to his grandchildren.

The application of the rules to the facts was interesting, because the wife knew of Trust 1 in Year 1; however, she wasn’t a beneficiary at that time because she wasn’t married to her husband. She proposed to execute a disclaimer nine months after the date of the marriage, when she became a beneficiary. The PLR held that this was a reasonable time within the meaning of Treas. Regs. Section 25.2511-1(c) so that the disclaimer wasn’t deemed to be a gift.

The next issue was whether the wife had accepted any interest in Trust 1. She hadn’t received any distributions from Trust 1. However, if a disclaimant accepts consideration in return for the disclaimer, that’s treated as accepting the benefits of the property. Consideration requires a mutual agreement, with offer and acceptance. The PLR emphasized that the wife wasn’t aware of the terms of Trust 2 until after it was established—she had no control over or participation in the provisions of the trust. Because there was no bargain relating to the terms of Trust 2, the PLR held that she didn’t accept any consideration in return for making the disclaimer or accept any of the benefits of Trust 1. Therefore, as long as the other requirements of the state law disclaimer statutes were met, the disclaimer wouldn’t be treated as a gift.