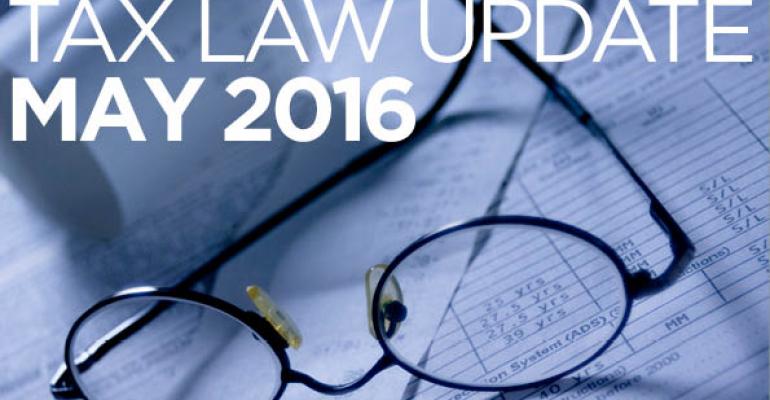 • Assets held in limited partnership (LP) includible in decedent’s estate—The Tax Court held for the Internal Revenue Service in Holliday v. Commissioner, T.C. Memo. 2016-51 (March 17, 2016). Sarah Holliday was the widow of Joseph H. Holliday, who owned a heating and air conditioning wholesale business. Sarah moved into a nursing home in 2003. She had two sons who managed her day-to-day financial affairs.

Three years later, she established an LP and funded it with marketable securities. She owned all of the LP interests (99.9 percent). A limited liability company (LLC) was the general partner (GP) with a 0.1 percent interest. On the same day she formed the LP and the LLC, she also formed an irrevocable trust. Less than a week later, all on the same day, she gave 10 percent of her LP interest to the irrevocable trust and sold her interest in the LLC to her two sons. Sarah retained substantial assets out of the LP for her support.

The LP held marketable securities until her death. The securities weren’t actively managed and were traded only on limited occasions. Although the LP agreement directed the GP to make periodic distributions of cash on a regular basis if there were sufficient funds in excess of its operating needs, the GP made only one distribution to its partners.

The IRS asserted that the assets of the LP were includible in Sarah’s estate under Internal Revenue Code Section 2036. IRC Section 2036 will apply to include assets transferred by a decedent during life if the decedent retains certain rights or beneficial interests in the property, unless the transfer is made for full and adequate consideration.

Section 2036 will apply if the decedent retains the right to income from transferred property or if there’s an implied understanding that the decedent retained that right. The Tax Court held that because the LP agreement required cash distributions to be made if the LP held sufficient funds in excess of its operating needs, Sarah retained a right to income from the transferred assets. Based on testimony from her sons, the court also found that distributions would have been made to Sarah if she needed the funds. The court essentially disregarded the ownership of the GP interest by the LLC (and the sons) when it found that there was an understanding between Sarah and her sons that the LP assets were available to her if she needed them. The court didn’t cite any other facts in support of this finding.

The Tax Court also held that Sarah’s transfer to the LP wasn’t a bona fide sale for adequate and full consideration. To meet that test, a taxpayer must show a legitimate and significant actual non-tax reason for creating an LP. The estate gave three reasons: (1) protection from creditors, (2) concern of undue influence from caregivers, and (3) preservation of assets. The court found that the first two concerns were theoretical but not in fact a concern for Sarah. The court found the third claim unpersuasive because Sarah had retained other significant assets in her own name. It reasoned that if she really had wanted to protect her assets, she would have transferred more assets to the LP. While other cases have held that it’s important to retain assets outside of an LP for a taxpayer’s use and support, this factor was a negative for Sarah.

Perhaps more importantly, the court noted that Sarah was apathetic regarding the LP and its structure: She didn’t actively participate in the process but merely went along with whatever her sons and the attorney decided. The court also noted that none of the partnership formalities were observed: There were no family meetings held, no books kept and no compensation paid to the GP.

• Estate’s charitable contribution limited to value of property on date of transfer instead of date of death—Victoria Dieringer, a resident of Oregon, died unexpectedly in 2009 owning significant holdings in a real estate property management corporation (DPI) that managed commercial and residential properties in Portland, Ore. She’d been chairman of the board, vice president and a shareholder. She owned both voting and non-voting stock. The issue presented in Estate of Victoria Dieringer v. Comm’r, 146 T.C. No. 8 (March 30, 2016) was how to value the shares of stock for an estate tax charitable deduction under IRC Section 2055.

Under her estate plan, Victoria made charitable bequests of $600,000 to various charities and left the rest of her estate (through a trust) to a family foundation. None of her children received any property under the estate plan other than personal property.

The estate’s law firm obtained an appraisal for the value of the stock as of Victoria’s date of death. The appraisal valued the voting stock at over $1,800 per share and the non-voting stock at over $1,700 per share. The shares represented a majority, controlling interest, so there was no discount for the voting shares. However, the shares weren’t valued as a single, controlling block.  Instead, the non-voting shares reflected a 5 percent discount for lack of voting power.

Prior to Victoria’s death, however, the family and DPI had discussed that it could be advantageous for the company to redeem Victoria’s shares during her life. After her death, the family and company consulted with counsel and decided to convert DPI from a C corporation to an S corporation for income tax reasons. In addition, DPI decided to redeem the estate’s shares. These actions would relieve the family foundation from many of the restrictions (including the unrelated business income tax and taxes on excess business holdings) it would face under the private foundation rules if it had significant holdings in DPI. It also protected the foundation from the risk of a decline in the value of the shares and made the foundation a preferred creditor of the company.

A second appraisal was obtained for purposes of the redemption. This appraisal, however, valued the shares using a discount of 15 percent for lack of control and 35 percent for lack of marketability, in addition to the 5 percent non-voting discount for non-voting shares. This appraisal resulted in a value of $916 per share for the voting shares and $870 per share for the non-voting shares. Prior to the redemption, several of Victoria’s sons purchased shares from DPI to provide it with the necessary cash. DPI then redeemed the shares held by Victoria’s trust in exchange for two promissory notes: one long term and one short term. The promissory notes were then assigned to the family foundation.

A deduction is allowed for property included in a decedent’s estate that’s transferred to charity. The date-of-death value of that transferred property generally determines the amount of the deduction. However, the court found that the redemption of the stock by DPI interfered with the family foundation receiving the full value of the DPI stock. While the court acknowledged the business purpose for the redemption, it held that the appraisal for the redemption completed only seven months after the appraisal for the estate tax return, which reduced the value of the shares by 50 percent, depleted the value of the residuary estate to which the foundation was entitled. It noted that one son was the executor of Victoria’s estate and the sole trustee of the trust and foundation; he’d orchestrated the transaction without any independent and outside accountability.

Ultimately, the court held that Victoria’s sons thwarted her estate plan by reducing the value of her intended donation to the foundation. As a result, the estate wasn’t entitled to deduct the date-of-death value of the DPI shares. It also held that an accuracy penalty applied because the estate was negligent in its instructions to the appraisers, didn’t have reasonable cause and didn’t act in good faith.