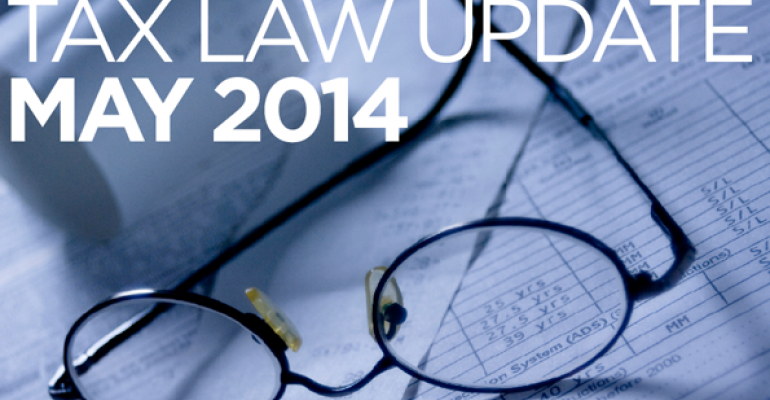 • Tax Court ruling upholds trustees’ activities as qualifying trust for material participation exception under IRC Section 469—In Frank Aragona Trust v. Commissioner, 142 T.C. No. 9, the Tax Court ruled in favor of the taxpayer, holding that a trust could and did materially participate in real estate rental activities, thus qualifying for the exception to the passive activity rules under Internal Revenue Code Section 469. This case is helpful, as there are currently no regulations regarding how to apply the material participation rules to trusts and very few rulings on the issue. The Internal Revenue Service has been interpreting the exception to be very limited, but the court agreed with the taxpayer that the activities of the trustees, including those in their capacity as employees of the trust’s wholly owned limited liability company (LLC), could be considered when determining whether the trust materially participated in the real estate rental business.

Although a majority of the trust’s business was operated through a wholly owned LLC, it engaged in some of its real estate business activities directly and in others through various entities. The trustees were intertwined in the LLC, other entities and the business. The LLC employed three of the trustees as fulltime employees (along with other employees, including a controller, maintenance workers, leasing agents and clerks). Two of the trustees also held minority interests in several of the entities in which the trust was also a member.

The Tax Court disagreed. It noted that the trustees’ fiduciary duties to administer the trust in the interest of the beneficiaries aren’t put aside when they work for the LLC owning the real estate. Therefore, their activities as employees of the LLC should be considered when determining whether the trust materially participated in its real estate operations. It’s interesting to note that the Tax Court didn’t determine whether the activities of the non-trustee employees should be considered because it wasn’t necessary to the decision. Lastly, the Tax Court held that the trustees’ individual minority interests in entities of which the trust was also a member didn’t impact the trust’s material participation because the combined minority interests in each entity held by the trustees were less than 50 percent and, in all cases, were less than the trust’s interest.

This case is very helpful for taxpayers in that the Tax Court adopted a relatively broad interpretation of whose activities may be attributed to the trust (and in what capacity those activities are undertaken) when determining if the trust materially participates in an activity. This issue has recently become even more important because of the 3.8 percent tax on net investment income (NII) under IRC Section 1411. Non-passive trade or business income isn’t considered NII and isn’t subject to the tax under Section 1411. This ruling may make it a little easier for trusts to prove that they’re materially participating in a trade or business to avoid this tax.

The first issue was whether the spouse’s ability to elect against the prenuptial agreement would interfere with the marital deduction. Under IRC Section 2056(b)(1), the marital deduction isn’t permitted when, on the lapse of time, occurrence of an event or contingency or failure of an event or contingency to occur, an interest in property passing to the surviving spouse will terminate or fail such that an interest in that property passes to another person.

The ruling applied the regulations, prior revenue rulings and a Tax Court case to hold that the spouse’s right to elect was a “mere procedural formality.” Even though the spouse was electing against the contractual rights under the prenuptial agreement, rather than electing against a will or a statutory right, as had been the case in most of the rulings, the IRS didn’t find the distinction meaningful.  In fact, it cited to a prior Tax Court case and revenue ruling that approved the marital deduction for property transferred to a spouse pursuant to an election between a life estate in trust or an outright cash bequest. In that case and ruling, the election was simply between two alternatives under the will, not between the will and a “property interest to which [the spouse] is otherwise entitled” under Treas. Regs. Section 20.2056(c)-2(c). Similar to these prior rulings, PLR 201410011 held that the spouse’s right to choose wasn’t a “contingency” that interfered with the marital deduction.

The second issue was whether preferred units in an LLC distributed to the marital trust would be eligible for the marital deduction. The IRS held that they were eligible because the marital trust contained the required provisions, notably that the trust’s net income was paid to the spouse at least annually, and the spouse could request that unproductive assets be made productive. Furthermore, the structure of the LLC allowed the spouse to enjoy the LLC units in a similar manner as a life beneficiary of a trust: The marital trust would be entitled to an 8 percent return on the preferred units, payable annually; the LLC couldn’t redeem the preferred units for less than the greater of face or market value; and the operating agreement couldn’t be amended or restated without the affirmative vote or consent by all preferred members.

• Ninth Circuit affirms Tax Court’s use of actual settlement payment, rather than date-of-death estimated value of claim against estate, as deduction under IRC Section 2053—In Estate of Gertrude H. Saunders v. Comm’r (2014 WL 949246 (9th Cir.)), the U.S. Court of Appeals for the Ninth Circuit affirmed the holding of the Tax Court (136 T.C. No. 18 (April 28, 2011)) relating to a deduction for a claim against the estate.

Gertrude’s estate filed an estate tax return on Feb. 23, 2006, claiming a deduction of $30 million under IRC Section 2053 for the value of a malpractice claim against her husband. Her husband’s estate claimed the same $30 million deduction on its estate tax return but received a closing document that stated that the value of the malpractice claim would be resolved in Gertrude’s estate. Ultimately, after the trial ended and the estate tax return was filed, the estate paid $250,000 in attorney’s fees to the plaintiff. The IRS audited the estate, disallowed the deduction and issued a notice of deficiency.

Treas. Regs. Section 20.2053-1(b)(3) provides that an item may still be entered on the return for a deduction though its exact amount isn’t then known, as long as it’s ascertainable with reasonable certainty and will be paid. The regulations further provide that liabilities imposed by law or arising out of torts are deductible.

The Tax Court agreed with the IRS that the value of the malpractice claim wasn’t ascertainable with reasonable certainty; therefore, a value estimated as of the date of death couldn’t be deducted on the estate tax return. Instead, it could only deduct the amount actually paid during the administration of the estate to settle the claim.

The estate argued that it wasn’t permissible to take post-death events (that is, the final $250,000 settlement) into account and that the value deducted on the return could only be determined with facts known as of the date of death. However, the Ninth Circuit affirmed the Tax Court’s decision. It explained that if a claim is enforceable and ascertainable with reasonably certainty, its value is determined without regard to post-death events, and such estimated value may be deductible. However, if a claim is contingent or disputed, then post-death events may be relevant when computing the value of the deduction. While it acknowledged the malpractice claim at issue wasn’t contingent (because it had been asserted), it found it to be disputed (because the claim was being litigated); therefore, post-death events could be considered. It upheld the Tax Court’s determination that the final settlement payment of $250,000 was the appropriate amount to deduct.

(1) Net income and principal to the grantor or other beneficiaries, as directed by a majority of the distribution committee with the grantor’s consent;

(2) Net income and principal to the grantor or other beneficiaries, as directed by the unanimous decision of the members of distribution committee (other than the grantor);

(3) Principal to beneficiaries other than the grantor, as the grantor directs for their health, maintenance, support and education; and

(4) Net income or principal to other trusts, as directed by the distribution committee.

The grantor retained a testamentary limited power of appointment (POA); in default of her exercise of her POA, the trust property would be distributed on her death to the grantor’s spouse’s then-living descendants.

And, similar to prior rulings, the grantor’s gifts to the trust were considered incomplete due to the grantor’s consent right, the power to distribute trust property to other beneficiaries under an ascertainable standard and the limited POA.

David A. Handler is a partner in the Trusts and Estates Practice Group of Kirkland & Ellis LLP.

Alison E. Lothes is an associate in the Trusts & Estates Group of Sullivan & Worcester's Boston office.