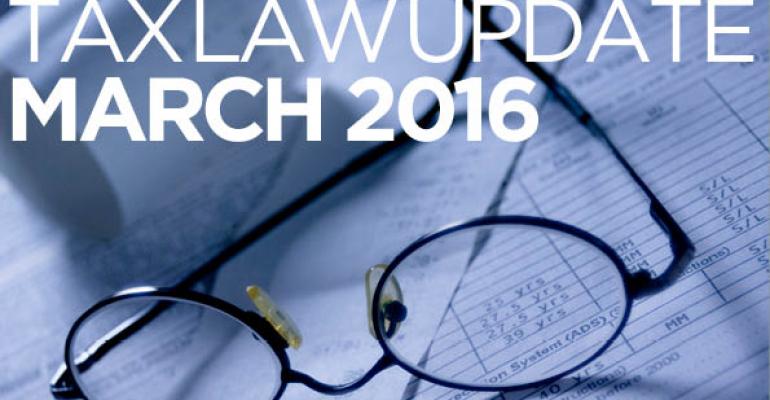 • Trustee held liable for taxes after making distributions from trust while trust owed federal income taxes—In United States v. Read, T.C. Memo. __ (Jan. 26, 2016), the United States sued Randy Read, individually and as trustee of the Bergin-Read Spray Trust, under Internal Revenue Code Section 3713(b). That IRC section provides that any insolvent person or his representative who pays any part of a debt prior to paying unpaid claims of the federal government will be held liable to the extent of those unpaid claims. The term “debt” has been liberally construed to include non-debt payments and distributions.

Randy was the trustee and the only person with authority to issue checks from the trust. While the government had an unpaid tax liability of over $120,000, Randy arranged for distributions for renovations to a home (in which he presumably lived) and to himself to invest in real estate, pay private school tuition for his children and send his children to camp. During these times, the trust’s value didn’t exceed its liabilities.

The court upheld the government’s motion for summary judgment and held that the government had shown facts sufficient to prove that Randy had the sole authority for handling the trust assets and making distributions, he was aware of its tax liability and he didn’t act as a reasonably prudent person would to inquire into the tax liability and the consequences of failure to pay.

As a result, the court held him liable for the full amount of the debt owed by the trust, which, including nonpayment penalties, exceeded $200,000, plus prejudgment interest.

• State court decision regarding treatment of payments doesn’t bind Internal Revenue Service—In Blagaich v. Commissioner, T.C. Memo. 2016-2, Diane Blagaich, the petitioner, disputed the tax treatment of certain payments made to her during the course of a romantic relationship with Lewis Burns. Lewis and Diane were in a relationship for about a year and a half. During that time, in 2010, Lewis paid Diane $200,000, gave her a $70,000 Corvette and wrote her other checks that totaled $73,819. In addition, in 2010, Diane and Lewis entered into an agreement to confirm their commitment to each other and provide financial support to Diane. Pursuant to the agreement, Lewis paid her an additional $400,000.

However, six months later, Diane moved on, and their relationship ended. Lewis sued Diane in state court in Illinois requesting that she return the Corvette, a diamond ring and other payments. He filed Form 1099-MISC with the IRS, reporting that he’d paid her $743,819 in 2010. In 2013, the state court held that Diane had fraudulently induced Lewis to enter into the agreement and entered a judgment against her of $400,000, to be paid to Lewis’ estate (he’d since passed away). The court found that the other payments, including the Corvette, the $200,000 and various checks were gifts from Lewis, and Diane was entitled to keep them. Lewis’ estate issued a revised Form 1099 showing $400,000 as the amount paid to Diane.

The IRS had adjusted Diane’s income in 2010 to reflect the $743,819 reported on the original 1099 Lewis issued. Diane brought this case alleging that the IRS was bound by the state court order and that a portion of those payments were gifts, not income. In addition, because she repaid the $400,000 to Lewis’ estate, she argued that the doctrine of rescission applied and that such amount shouldn’t be considered income to her.

The Tax Court didn’t agree and denied her motion for summary adjudication. It held that the IRS wasn’t bound by the state court action and wasn’t estopped from maintaining that the payments were income, not gifts, because the IRS wasn’t a party to the state court action nor in privity with any party to that action. In addition, the Tax Court held that rescission wouldn’t apply here, as the payment back to Lewis’ estate was made three years after the payment was received—rescission usually applies to payments transacted within the same year.

The form is raising many issues for fiduciaries. First, the content could be misleading as the form requires the executor to provide the date-of-death value of an asset, which may not accurately reflect the tax basis of the asset for the beneficiary, depending on whether there are post-death adjustments that might occur with real estate (depreciation) or interests in partnerships, for example. Second, because the form is due well in advance of when the executor may be distributing assets, the executor will have to report the values of all assets that could be distributed to the beneficiary, which would likely include assets that the beneficiary may never receive. This reporting requirement raises confidentiality concerns. Lastly, the form is required to be filed by all estates that are required to file a federal estate tax return. It appears that estates filing an estate tax return only for portability purposes wouldn’t have to file this form, but it’s not explicitly clear. The instructions also don’t provide for any type of assets to be excluded—the executor must list any and all assets that a beneficiary could receive.

If there’s an adjustment to the value of an asset after Form 8971 is filed, a Supplemental Form 8971 with revised Schedules will need to be filed within
30 days of that adjustment.

While the form is final, there’s still a lot of uncertainly in the estate-planning community about its usefulness and practicality.