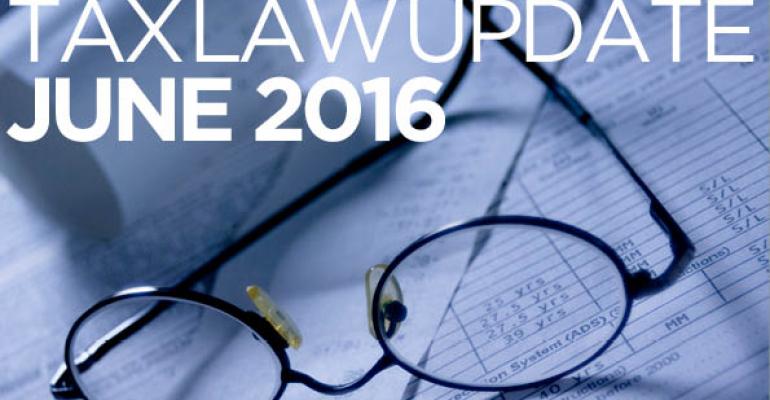 • Tax Court allows Internal Revenue Service to attach (but not foreclose) a federal tax lien to beneficiary’s right to money held in a discretionary support trust—In Nancy K. Duckett v. Dennis M. Enomoto, et al., No. CV-14-01771-PHX-NVW (April 18, 2016), Dr. Dennis Enomoto was the beneficiary of a testamentary trust established under his mother’s will. The question in the case was whether the IRS could reach the assets of an irrevocable trust of which Dennis was a beneficiary.

Beginning in 2007, Dennis failed to pay his income taxes, and by 2011, the IRS had made assessments totaling $701,079. In 2013, Dennis’ mother passed away, and the estate soon delivered $173,545.12 to the trustee of the testamentary trust created for Dennis’ benefit under his mother’s will. In June 2014, the IRS served the personal representative of his mother’s estate with a Notice of Levy demanding that she turn over any of Dennis’ “property and rights to property” in her possession pursuant to a federal tax lien. When the personal representative informed Dennis, he objected to paying the funds to the IRS. The personal representative filed an interpleader action in Arizona state court against Dennis, the IRS and the trustees. The IRS then removed the action to the Tax Court. By 2015, Dennis had paid some of his debts to the IRS, but still owed a balance of nearly $500,000. Both parties moved for summary judgment on the issue of whether the federal tax lien on Dennis’ “property” or “rights to property” attached to the trust funds.

The will provided that the “Trustee shall pay to Dr. Enomoto so much or all of the net income and principal of the trust as in the sole discretion of the Trustee may be required for support in the beneficiary’s accustomed manner of living, for medical, dental, hospital, and nursing expenses, or for reasonable expenses of education, including study at college and graduate levels.” A licensed private fiduciary served as trustee.

The Tax Court analyzed both Arizona state law and federal law in reaching its decision. First, the court used state law to determine what rights Dennis had in the trust. The court categorized the trust as a “discretionary support trust,” whereby the trustee must pay the beneficiary in accordance with an ascertainable standard, yet the trustee’s determination of exactly how much payment is required is reviewable only for abuse of discretion. Second, the court used federal law to determine whether the taxpayer’s state-delineated rights qualified as “property” or “rights to property” under federal law. The most important consideration in triggering federal tax lien attachment is the breadth of the control the taxpayer could exercise over the property. The court relied on a similar case offered by the IRS—United States v. Taylor, 254 F. Supp. 752 (N.D. Cal. 1966)—which highlighted several factors to suggest control by a beneficiary over a trust. In Dennis’ case, the court stated that the use of the words “shall pay” were significant; they suggest it’s within the trustee’s discretion only how much to pay, not whether to pay. Further, the ascertainable standard suggests that Dennis had a basic beneficial right to the trust funds for his living expenses. In addition, if the trust assets fell below $10,000, the trustees had to distribute the funds outright to Dennis, suggesting further control. Lastly, the fact that Dennis was the sole beneficiary seemed to support the IRS’ argument.

The court held that the IRS could attach the federal tax lien to the trust funds. However, the court stated that this attachment doesn’t justify enforcement of the lien as to any specific amount. The property rights had no fixed dollar value and fluctuated according to the taxpayer’s needs and living demands, and the IRS had provided no evidence of Dennis’ needs or demands. As a result, there was no reason to think the lien extends to all of the trust fund. So, the IRS had a valid lien but couldn’t enforce it without further evidence.

(3) Guidance on basis of grantor trust assets at death under Section 1014. We expect these regulations will state that assets in an irrevocable grantor trust that aren’t includible in the grantor’s estate won’t receive a basis step-up.

(4) Revenue procedure under IRC Section 2010(c) regarding the validity of a qualified terminable interest property (QTIP) election on an estate tax return filed only to elect portability. We expect these regulations will clarify that a QTIP election made to preserve/elect portability, when such an election wasn’t required to eliminate estate tax, isn’t void.

(5) Guidance on the valuation of promissory notes for transfer tax purposes under IRC Sections 2031, 2033, 2512 and 7872. We expect these regulations will require intra-family notes to be valued at face value and not discounted based on interest rates, unless the taxpayer can show the full amount is unlikely to be repaid.

(6) Final regulations under IRC Section 2032(a) regarding imposition of restrictions on estate assets during the six month alternate valuation period (proposed regulations were published on Nov. 18, 2011).

(7) Guidance under IRC Section 2015 regarding personal guarantees and the application of present value concepts in determining the deductible amount of expenses and claims against the estate.

(8) Regulations under IRC Section 2642 regarding available generation-skipping transfer (GST) tax exemption and the allocation of GST tax exemption to a pourover trust at the end of an estate tax inclusion period. These regulations will help clarify what happens regarding automatic allocations and GST tax elections when a trust, such as a grantor retained annuity trust or qualified personal residence trust, ends and pours into another trust.

(9) Final regulations under IRC Section 2642(g) regarding extensions of time to make allocations of the GST tax exemption (proposed regulations were published on April 17, 2008).

(10) Guidance on the gift tax effect of defined value formula clauses under IRC Sections 2512 and 2511.

(11) Regulations under IRC Section 2704 regarding restrictions on the liquidation of an interest in certain corporations and partnerships. We understand these regulations will be issued very soon.

(12) Guidance under IRC Section 2801 regarding the tax imposed on U.S. citizens and residents who receive gifts or bequests from certain expatriates.

• Tax Court rules on split-dollar insurance arrangement—In Estate of Clara M. Morrissette, 146 T.C. 11 (April 13, 2016), the Tax Court ruled on which taxing regime applied to a split-dollar insurance agreement. Arthur E. Morrissette started a moving company and eventually expanded by purchasing other companies, all of which ultimately were held by a holding company, Interstate Group Holdings, Inc. (IGH). Arthur’s wife, Clara, survived him, and in 1994, she established a revocable trust and contributed all of her holdings in IGH to the trust. The Morrissettes had three sons who, in 2006, became co-trustees of her trust and petitioned for a guardian to be appointed to handle Clara’s affairs.

Through her guardian, Clara established three dynasty trusts, one for each of her sons. The trusts entered into a shareholders’ agreement under which the brothers and their respective trusts agreed that, on the death of any one brother, the other brothers (or their trusts) would purchase IGH stock held in the trust of the deceased brother. To fund the anticipated purchase of the stock on a brother’s death, Clara’s revocable trust gave nearly $10 million to each trust to purchase universal life policies on the lives of the sons (not Clara). Clara’s revocable trust and the three dynasty trusts entered into a split-dollar agreement. In the agreement, if a dynasty trust received a death benefit, it was obligated to pay to the revocable trust the greater of: (1) the cash surrender value (CSV), or (2) the aggregate premium payments on that policy. The dynasty trusts executed collateral assignments of the policies to the revocable trust to secure the payments of the amounts owed. The split-dollar agreement states that the parties intended that the agreement be taxed under the economic benefit regime.

Clara filed gift tax returns reporting gifts to the dynasty trusts based on the economic benefit regime. The amount of each gift was the cost of the current life insurance protection using the IRS table, less any premiums paid by the dynasty trust. When she passed away, Clara’s estate included about $7.5 million of the receivables under the split-dollar agreement. (If the value of the notes were discounted in the estate, then the basis should be decreased accordingly, and this will cause there to be ordinary income when paid off. Depending on income tax rates, that result could negate or eliminate most of the estate tax savings from the discount.)

The IRS issued notices of deficiency, asserting that the total amounts of premiums paid should be treated as gifts (a deficiency of nearly $14 million plus penalties of $2.7 million). The estate moved for partial summary judgment, arguing that the economic benefit regime should govern the arrangement.

In Clara’s case, she was funding insurance on her sons’ lives, which isn’t typical (when the grantor/donor is the insured). Statistically, she wouldn’t be (and in fact, she wasn’t) alive to collect on the split-dollar agreement, but nonetheless, it was still upheld. Presumably, the court would have upheld a loan regime split-dollar as well.