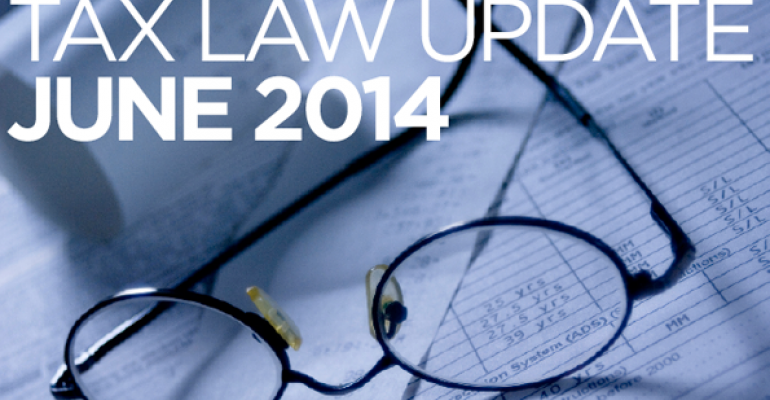 • Tax Court rules on estate tax effect of distributions from unsegregated revocable trust—In Estate of Olsen v. Commissioner, T.C. Memo. 2014-58 (April 2, 2014), the Tax Court was faced with a factual question of how withdrawals made by a surviving spouse from a general trust fund should be allocated among the marital trusts and family trust that were supposed to have been (but, in fact, weren’t) established under his wife’s revocable trust.

Elwood Olsen and his wife, Grace, were both graduates of Morningside College, and Elwood worked there for over 30 years as a manager of operations and vice president of business. Elwood was a veteran and a lawyer who was awarded an honorary doctorate of laws by Morningside College. After Grace died, her revocable trust directed the trustee to divide the trust property among Marital Trust A (generation-skipping transfer (GST) tax-exempt trust), Marital Trust B (non-GST tax-exempt trust) and a family trust, based on a formula. The estate tax return showed the allocation of property among the three trusts, which was roughly $1.5 million to the two marital trusts and $600,000 to the family trust.

After Grace’s death, Elwood failed to segregate the trust property among the three trusts and properly fund them. However, he did make three significant withdrawals from the general revocable trust fund: two withdrawals, totaling almost $1,080,000, were used to make donations to Morningside College, and one withdrawal of almost $400,000 was deposited into his own account and, eventually, used to make gifts to his family members.

When Elwood died, his son was appointed as personal representative of Elwood’s estate and successor trustee of Grace’s trust. Elwood’s son filed an estate tax return that didn’t include any portion of the trusts under Grace’s revocable trust. He took the position that the withdrawals were made first from the marital trusts, which were fully depleted as a result. This left only the family trust, which wasn’t includible in the estate.

The estate argued that it was Grace’s and Elwood’s intent to reduce estate taxes and use Grace’s unified credit for the benefit of her descendants; therefore, the withdrawals were intended to be from the marital trust.

The marital trust required all income to be paid to Elwood and authorized distributions for his health, education, support and maintenance. During Elwood’s life, the family trust authorized distributions for Elwood’s health, education support and maintenance. In addition, Elwood had a lifetime and testamentary power of appointment (POA) over the family trust, which allowed him to appoint trust property to any of their children, grandchildren and/or charitable organizations. The Tax Court found that Elwood’s withdrawals that were donated to Morningside College were exercises of his POA over the family trust in favor of charity. However, the Tax Court determined that the last withdrawal, which was deposited into Elwood’s account, was a distribution from the marital trust because Grace wouldn’t have intended discretionary distributions to be made to Elwood from the family trust until the marital trusts were exhausted. The opinion doesn’t cite to a particular provision of the trust instrument on this point, however, and the court didn’t elaborate on why the distribution from the marital trust, at least a part of which was used to make gifts to their children, couldn’t have been construed as an exercise of Elwood’s POA in favor of Grace’s children and grandchildren.

In the end, the two withdrawals that were donated to Morningside College depleted the family trust, and the remaining property in Grace’s revocable trust was held to be entirely marital trust assets. Elwood’s estate was required to include a little over $600,000 as part of the taxable estate under Internal Revenue Code Section 2044.

This case is a good reminder about the importance of administrative follow-through. Often, it takes quite a while to fully fund trusts after a decedent’s death, but even in the absence of proper funding, any documentation of withdrawals and their treatment can be helpful. Here, Elwood’s son was left, without any evidence or guidance, to argue with the IRS on a theoretical basis.

Wallace Woodbury died on Sept. 27, 2006. His personal representative timely filed to extend the filing deadline from June 27, 2007 to Dec. 27, 2007. With the extension, the estate paid about $9.5 million in estate tax and included a letter explaining to the IRS that it intended to make an election under Section 6166 to pay another $10 million in installments. In December, the estate filed another Form 4768 requesting an additional extension for another six months and again noted that it wished to make an election under Section 6166. The estate claimed it couldn’t yet file an estate tax return because it was unable to obtain valuations of all its business interests. Neither extension letter described the business interests in question. In the meantime, the estate made approximate payments consistent with a Section 6166 election and noted on the payments that they were made related to the election.

The IRS denied the estate’s request for a second extension because there’s no authority for an extension longer than six months. The estate didn’t file its return until June 1, 2010, almost two and a half years late. On its return, it attached a notice of election for a Section 6166 deferral. The IRS denied the election because it wasn’t made on a timely return. The estate filed for a declaratory judgment, stating that it had paid all applicable interest and the first principal installment that would be due under Section 6166. It asked the court to declare that its election was valid under the doctrine of substantial compliance or, in the alternative, to allow the estate to pay that portion of the estate tax that would otherwise have been eligible for deferral in an equivalent amount of time. The IRS moved for summary judgment, and the court granted the IRS’ motion.

The court looked at the requirements of the Section 6166 election and determined that the estate hadn’t complied, generally, with two of the required informational elements: (1) a list of the closely held business interests, and (2) valuation information showing that the business interests would qualify for deferral because their value met the threshold percentage (35 percent of the adjusted gross estate). The court held that because the estate hadn’t provided this information, even in some general form, by the filing deadline, it hadn’t substantially complied with the requirements of the statute. In addition, the court held that it wasn’t authorized to grant extensions or allow the estate to pay its tax over an extended time period without the election.

• Chief Counsel Advice relating to elective share and marital deduction—In CCA 201416007 (released April 18, 2014), the IRS ruled on whether an estate could claim the marital deduction for property in a portion of a foreign trust that the estate included as part of the spouse’s elective share. During his life, the decedent funded a trust for himself and his child in a foreign country. The trust was administered by a foreign corporate fiduciary and owned shares in foreign situs companies. The ruling provided that it wasn’t subject to the jurisdiction of U.S. courts.

After the decedent’s death, his spouse asserted her right to a certain percentage of his estate under the state’s elective share statute. However, her elective share exceeded the amount of property available in his probate estate and revocable trust. The executor filed an estate tax return that claimed a marital deduction for the entire elective share, making up the “shortfall” with property held in the foreign trust.

However, the spouse wasn’t a beneficiary of the foreign trust and had no access to the trust assets. The IRS ruled that because no part of the foreign trust property could pass to the surviving spouse and she had no beneficial interest in the property, under IRC Section 2056, no portion of the trust was eligible for the marital deduction, regardless of the elective share. It based its reasoning on the 2012 case, Estate of Turner v. Comm’r, 138 T.C. 306. In Turner, the Tax Court held that the value of family limited partnership interests included in an estate under IRC Section 2036 weren’t eligible for the marital deduction. The decedent gave the partnership interests to family members during his life. Although the value of the interests was includible in his estate under Section 2036, other family members owned the partnership interests at his death, and his surviving spouse had no beneficial interest in them. Although his revocable trust sought to maximize the marital deduction by using a formula, the Tax Court held that the marital deduction couldn’t apply to assets in which the surviving spouse had no beneficial interest. Similarly, in CCA 201416007, the IRS held that the trust property that couldn’t be paid to a spouse wasn’t eligible for the marital deduction, even though the spouse was entitled, under state law, to a greater amount of the decedent’s property. Unfortunately for the spouse and the estate, the foreign trust thwarted both the elective share and the marital deduction.