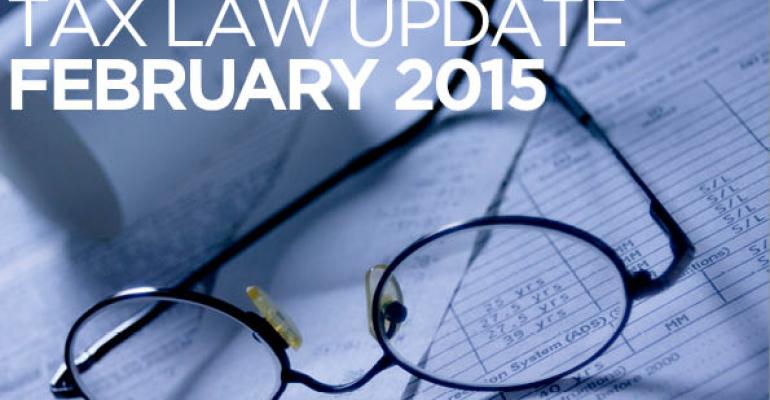 • Fifth Circuit affirms district court ruling that imposed personal liability on donees for gift tax plus interest—In United States v. Marshall (Nov. 2, 2014), the U.S. Court of Appeals for the Fifth Circuit held that the donees of several indirect gifts from J. Howard Marshall were personally liable for the gift tax that remained unpaid. In addition, the court interpreted Internal Revenue Code Section 6324, along with IRC Sections 6901 and 6601, to impose interest on the gift tax without any limit.

In 1995, J. Howard Marshall sold stock in Marshall Petroleum, Inc. (MPI) back to the company. The Internal Revenue Service determined that the price was below its fair market value, and, as a result, he had made a gift to the other stockholders. The other stockholders at the time were certain members of his family and various trusts for their benefit, including a grantor retained income trust (GRIT) created by his former wife, Eleanor Pierce Stevens. Howard died shortly after he sold the stock, and his estate ended up litigating with the IRS. Eventually, in 2002, the estate and the IRS entered into a stipulation that acknowledged he had made gifts, the value of which exceeded $80 million. However, his estate never paid the tax.

Eleanor died in 2007. Howard’s and Eleanor’s son, E. Pierce Marshall, was the executor of her estate, and a third party, Finley Hilliard, was the trustee of her living trust that owned the MPI stock. In 2008, the IRS assessed gift tax liability against the donees and imposed personal liability on the executor and trustee of Eleanor’s estate and trust for making distributions to beneficiaries before paying Eleanor’s share of the gift tax.

Under IRC Section 6324(b), if gift tax isn’t paid by the donor, a donee “shall be personally liable for such tax to the extent of the value of the gift.” The question raised was whether a donee is also liable for interest, and if so, in amounts exceeding the value of the gift. The Fifth Circuit agreed with the government and held that Section 6324(b) had to be read in conjunction with Section 6901, which provides that transferee liability is “subject to the same provisions and limitations as in the case of the taxes with respect to which the liabilities were incurred.” While previous case law had held that Section 6901 was a procedural statute that doesn’t create a liability per se, the Fifth Circuit relied on legislative history and delicately stated that Section 6901 still did “help explain the nature of that obligation.” It also noted that its conclusion comported with the general rule that interest accrual should be treated the same in underpayment and overpayment cases and that taxpayers who hold government funds should pay interest for the period such funds are held. The court wasn’t bothered that the donees were now liable for the gift tax, interest that the donor would be liable for and the additional interest accruing on their liability.

On this main issue, one judge dissented, noting that the government was holding the donees liable for almost $75 million over and above the value of the gifts, most of which was interest. She argued that the plain language of Section 6324(b) limits the gift tax and interest liability to no more than the value of the gift. The dissent also noted its interpretation was consistent with the Third Circuit and Eighth Circuit.

The other issues raised on appeal were whether Eleanor was a “donee” liable for the tax for the gift made to the GRIT for her benefit and whether Pierce and Finley were personally liable due to the distributions they made from her estate and living trust.

The Fifth Circuit affirmed the district court and held that even though the GRIT was the shareholder in MPI, Eleanor, the life income beneficiary, was the donee for the purposes of Section 6324(b). The court distinguished the case law on Section 6324(a)(2), which has held that the liability for an estate tax lien is imposed on the trustees of a trust, not its beneficiaries, based on the use of the word “trustee” in Section 6324(a)(2) and its absence in Section 6324(b). The court further held that the remainder beneficiaries weren’t donees, even though they would receive a majority of the increase in value in the shares of MPI, as they were entitled to the property at the end of the GRIT’s 10-year term. As a result, Eleanor was the sole donee under Sec- tion 6324(b) and was liable.

Lastly, the court held that Pierce and Finley were personally liable for distributions made from Eleanor’s estate and living trust under IRC Section 3713, the federal priority statute. This statute imposes liability on a fiduciary who distributes assets before paying a claim of the government if he knew or should have known of the government’s claim. Actual knowledge isn’t required, only knowledge of facts that would put a reasonable person on notice as to the unpaid claim. Given Pierce’s and Finley’s acknowledgements in depositions that they were aware of the government’s potential claims, the Fifth Circuit agreed that they both had notice and could be held liable under the federal priority statute. However, the Fifth Circuit did find that the district court was incorrect in holding that Pierce breached his fiduciary duty, as it held that under Texas law, an executor doesn’t owe a fiduciary duty to the estate’s creditors in this circumstance.

• Nonprofit not required to reapply for exemption when changing domicile—In Private Letter  Ruling 201446025 (Aug. 20, 2014), a non-profit corporation formed under the laws of one state (the old state), planned to file a certificate of conversion with that state and articles of domestication with a second state (the new state), to change its state of domicile to the new state. The law of the new state provided that the date of incorporation would be the original date of incorporation in the old state, and the entity would continue to exist without interruption. The nonprofit sought a ruling that its change of domicile wouldn’t require it to reapply for exemption.

However, the PLR distinguished the fourth example in Rev. Rul. 67-390, noting that it created a new organization by filing new articles of incorporation, whereas the nonprofit here only filed an amendment to its formation document. It held that the conversion didn’t amount to the creation of a new organization that would require reapplication for exemption.