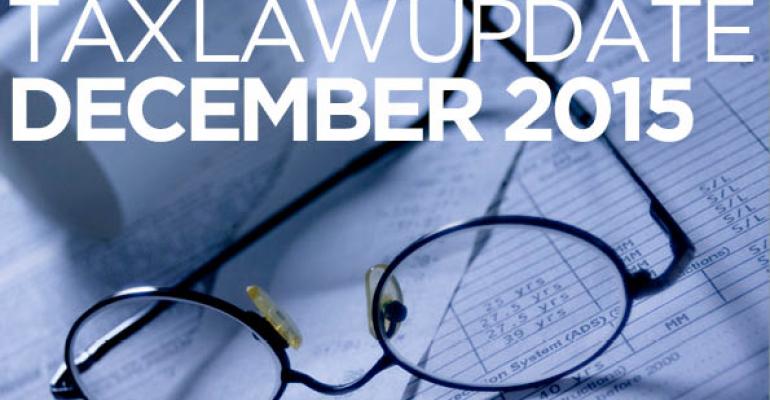 • The generation-skipping transfer tax exemption under IRC Section 2631 increases to $5.45 million (up from $5.43 million).

• Proposed amendments to modify statutes to be inclusive of same-sex couples—The IRS released proposed regulations (NPRM Reg. 148998-13) that reflect the holdings of the recent U.S. Supreme Court cases (Windsor v. United States, 570 U.S. ____ (2013) and Obergefell v. Hodges (576 U.S. ___ (2015)), which require that same-sex couples be treated the same as opposite-sex couples under the IRC. Under Revenue Ruling 2013-17, terms indicating gender (such as “husband” and “wife”) are to be interpreted in a neutral way to include same-sex spouses as well. The proposed regulations amend IRC Section 7701 to provide that for federal tax purposes “spouse,” “husband” and “wife” all mean an individual lawfully married to another without regard to gender. In addition, if a marriage is recognized by a state, it will be recognized for federal purposes. However, this recognition doesn’t apply to registered domestic partnerships, civil unions or other similar relationships that aren’t denominated as marriages.

• Tax Court case holds that transfers weren’t gifts because the source of consideration received by taxpayer is irrelevant—In Estate of Edward Redstone v. Commissioner (145 T.C. No. 11, Oct. 26, 2015), the Tax Court addressed the issue of whether a transfer by a taxpayer to his children in settlement of claims against his father was a taxable gift.

Edward Redstone’s father, Mickey, built a family business of movie theaters in the Northeast. As the business continued to grow, it became necessary to reorganize its structure. Mickey, Edward and Edward’s brother, Sumner, established a new corporation as a holding company. Although Mickey contributed more cash and property, the shares in the holding company were divided equally among the father and each son, 100 shares (33.33 percent) each.

Years later, disputes arose between Edward and his brother and father, both personally and about the family business. Edward decided to leave the family business and demanded his 100 shares. Mickey refused to give him the shares, and Edward sued his father. The lawsuit was contentious, and Mickey dug in his heels, refusing to settle unless Edward acknowledged that a portion of the 100 shares were intended to be held for Edward’s children, under an oral trust. Eventually, on the advice of his lawyer, Edward settled with Mickey and agreed to transfer a number of the shares to trusts for his own children. The company redeemed two-thirds of Edward’s shares for $5 million, and Edward transferred one-third of the shares to trusts for his children in 1972. No gift tax returns were filed.

More than 30 years later, in 2006, Edward’s children and the trustees of the trusts sued Edward, Sumner and the holding company, alleging that additional shares were subject to the oral trust that Mickey claimed and that those additional shares should have been transferred to the trusts as well. In this litigation, Edward testified that he firmly believed he’d always been entitled to all 100 shares and that there was no oral trust. He’d merely settled the litigation because there was no other way to end the dispute with his father.

The IRS became aware of the original transfers of stock to the trusts as a result of the 2006 litigation and, in 2013, issued a notice of deficiency asserting over $700,000 in gift tax due, plus additions to tax of nearly $400,000. The IRS argued that Edward’s 1972 transfer of the shares to the trusts for his children as a result of the litigation with his father was a gift to his children. The question was whether the transfer was made for adequate and full consideration in money or money’s worth, which would require the transfer to be bona fide, at arm’s length and free from any donative intent. The court held that the transaction met all three of these requirements. The IRS didn’t challenge that conclusion but further argued that it was still a gift because Edward’s children (who weren’t parties to the first litigation) provided no consideration in exchange for the funding of the trusts.

The Tax Court reasoned, however, that the source of the consideration received by Edward, the transferor, was irrelevant. The consideration didn’t need to come from the donees of the gift. Because Edward received consideration for the transfer (from his father, in settlement of the claims he had against him), it wasn’t a taxable gift.

• Expected guidance on step-up in basis for assets held in grantor trust—The IRS plans to provide guidance on whether assets in a grantor trust, which aren’t includible in the transferor’s estate, still receive a step-up (or down) in income tax basis under IRC Section 1014, according to its priority guidance plan for 2015-2016. The IRS is also considering related issues, such as the transfer of debt-encumbered property.