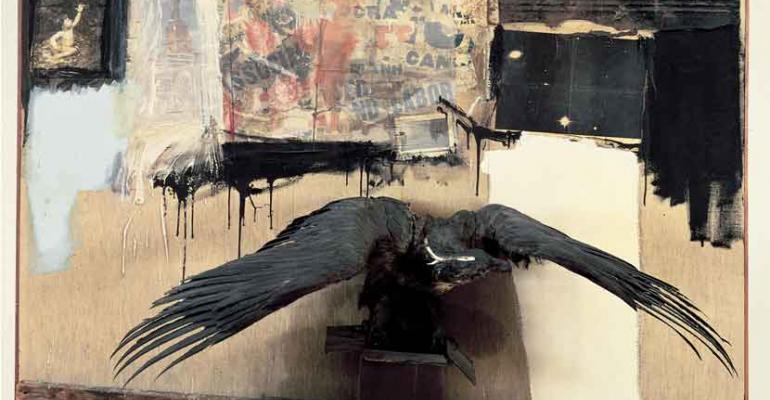 The Robert Rauschenberg American Eagle, embedded in his composite work entitled “Canyon,” from 1959, has landed at the Museum of Modern Art (MOMA), tax free.

The art dealer Ileana Sonnabend owned the artwork when she died in 2007.  Because the work included a stuffed American Eagle, Federal law prohibited its sale.1 Despite the legal prohibition on sale and the work’s notoriety, having been on display at the Metropolitan Museum of Art, the Internal Revenue Service, nonetheless, asserted an estate tax value of $65 million, resulting in a tax liability in excess of $29 million, plus interest and penalties of almost $11 million.  For more information about the ensuing Tax Court controversy, see my article, “The Value of Unsalable Art.”

A recent settlement between the taxpayer and the IRS leaves unresolved the obvious legal issue:  Can the government prohibit by statute the existence of a marketplace and, nonetheless, assert the imposition of its estate tax based on its “fair market value” standard of a willing buyer and willing seller?2  At a minimum, the IRS position appeared high-handed.  Given the unusual circumstances of the case and the unlikelihood of such pointed facts arising again, the IRS was probably wise to settle and avoid a potentially adverse court decision.

As reported, the IRS accepted the imposition of no additional estate taxes attributable to the artwork.  And the IRS obtained a confirmation that no commercial market for the work exists, by virtue of its donation to one of the world’s foremost museums.  The heirs avoided the immediate imposition of a significant estate tax liability, while gaining public recognition of the decedent and her role in the art world by MOMA, which will now acknowledge Ileana Sonnabend as a founder in its lobby.