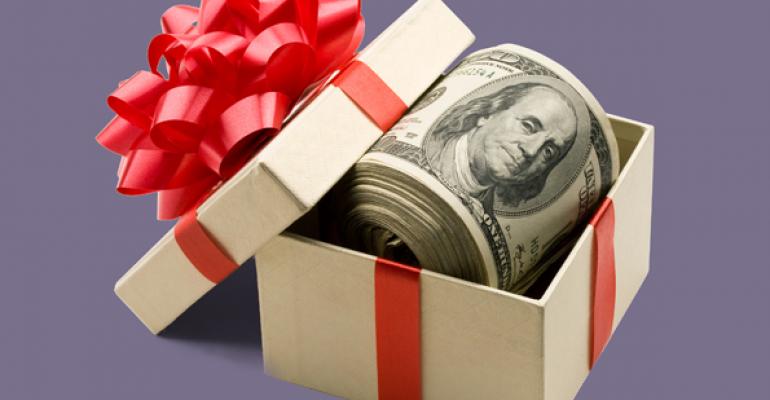 In Cavallaro v. Comm’r, T.C. Memo. 2014-189, the Tax Court held that the taxpayers, William and Patricia Cavallaro, made gifts to their three sons as a result of a merger of two family-run businesses. The Cavallaros weren’t highly educated (William didn’t complete high school, and Patricia finished high school and one year of secretarial school), but after William gained some expertise in tool making, they started their own machine tool business, Knight Tool Co. (Knight), in 1976. Their business was primarily to make custom tools to order.

Their sons graduated from college and, ultimately, returned to help run Knight. The family was interested in trying to move out of the custom order business and, perhaps, develop their own product. In 1982, after visiting a customer, William and his son, Ken, decided to try to create a liquid-dispensing machine (named CAM/ALOT) that could be used in the production of computer circuit boards. Knight started making the machines but wasn’t profitable at first because of mechanical and design problems. As Knight continued to lose money, William and Patricia decided that the company had to put the CAM/ALOT project aside.

However, their sons continued to work on improving the machine. In 1987, the family hired an attorney who incorporated a new company, Camelot Systems, Inc. (Camelot), in which each of the three sons owned 50 of the 150 total shares. The three sons each contributed $1,000 to the business initially but never made additional capital contributions. They continued to make changes to the design and, eventually, were able to produce more effective machines. The opinion describes the sons as marketers and businessmen, but not engineers. Instead, the court notes that the Knight engineers developed the improvements. It characterized the relationship as one in which Knight owned the machine tool intellectual property and production and used Camelot as a sales agent.

The opinion noted that Camelot simply transmitted orders to Knight, without any cost or risk for non-payment (that is, Camelot paid Knight a price for the machine comprised of Knight’s cost plus overhead, but Camelot was only billed by Knight once a customer had paid). Camelot had no employees for almost 10 years and no bank accounts or books of its own. All individuals who worked on the CAM/ALOT machines were on the Knight payroll and received wages from Knight (including the sons). Knight claimed research and development tax credits based on its work on the machines, and the only trademark for the machine was in Knight’s name. The Tax Court found that Knight “provided the equipment and personnel for making the machines, paid the bills and bore the risk; but profits were disproportionately allocated to Camelot.”

Eventually, it became desirable to merge the two companies to expand the sale of CAM/ALOT machines in Europe. In the process of structuring the merger, the Cavallaros consulted with accountants and estate-planning attorneys in the mid-1990s. The team had to determine which company owned the CAM/ALOT technology. The estate-planning attorneys concluded that the technology had been transferred to the sons in 1987, when the family hired the attorney who prepared the organizational documents for Camelot, and they convinced the accountants of this position. There was no paperwork that documented this transfer, but the estate-planning attorneys prepared affidavits for the family to sign describing the meeting and their intent.

However, the court wasn’t convinced. It noted that the machines were manufactured at Knight’s risk, on its premises and using technology developed by Knight employees, and the only public registrations of intellectual property were in Knight’s name. In a footnote, the opinion highlights that the companies’ accountant altered financial statements from 1991, which originally reflected that Camelot sold the machines produced by Knight, to state that Knight provided the machines “owned” by Camelot. The companies’ tax filings from 1990 to 1993 also indicated that Knight manufactured machine tools, and Camelot sold them.

The companies merged in 1995. William and Patricia received 20 shares each of the new company; their sons received 54 shares each. An accountant valued the two companies and determined that the merged entity was worth between $70 million and $75 million, with Knight worth between $13 million and $15 million. A year later, the company was sold for $57 million, with an agreement for additional deferred payments (that, ultimately, were never paid). The IRS audited the companies’ potential income tax returns and, after investigating the transaction, issued notices of deficiency determining that: (1) Camelot had no value prior to the merger, and (2) through the merger, William and Patricia each had made gifts of over $23 million to their sons.

The Cavallaros presented experts at trial to value the companies. Their experts assumed that Camelot owned the CAM/ALOT technology and that Knight was a contractor for Camelot. As a result, the value of Knight’s portion of the merged company was less than 20 percent. The IRS expert assumed that Knight owned the technology; therefore, he attributed 65 percent of the value of the merged company to Knight.

The court held that the 1995 merger wasn’t an arm’s-length deal. It found that any unrelated party would have required Camelot to produce documentation that it owned the technology, and when Camelot couldn’t produce such proof of ownership, it would have paid much less for the company. And, if Knight had been dealing with an unrelated party, it wouldn’t have simply disclaimed its ownership of the technology, particularly when all indicia showed that it was the owner of CAM/ALOT. Nor were there any arm’s-length negotiations.

In terms of valuing the companies, both of the taxpayers’ experts assumed that Camelot owned the technology. The court disagreed with this assumption and disregarded their valuations. As a result, because the taxpayers didn’t uphold their burden of proof, the court upheld the IRS determination of the gifts at trial (even though the court acknowledged that some aspects of the IRS expert’s valuation of the companies were flawed). The result was that William and Patricia made gifts totaling $29.6 million due to the merger, with a small silver lining: The court held that penalties didn’t apply because William and Patricia had, in good faith, relied on a competent tax advisor.

In CCA 201442053, the IRS ruled that IRC Section 2701 applied to a recapitalization of a family-owned limited liability company (LLC), causing the taxpayer to have made gifts to her sons. The taxpayer established the LLC with her sons and was the sole member to make a capital contribution. Over time, she made gifts of membership interests to her sons and grandchildren.

Under the LLC’s operating agreement, distributions, profits and losses were to be allocated pro rata to the members according to their membership interests. Later, the operating agreement was amended to provide that, in exchange for the sons’ agreeing to manage the company, all profits and losses would be allocated equally to the two sons. The taxpayer and her grandchildren retained the right to distributions based on their capital account balances.

Because the taxpayer surrendered her right to participate in the future profits and losses but retained the equity interest with a right to distributions, Section 2701 applied. Section 2701 applies to recapitalizations if a taxpayer holds an “applicable retained interest” that’s subordinate to the equity interest transferred and receives property pursuant to the recapitalization (other than her retained interest). The right to distributions based on her existing capital account retained by the taxpayer was senior to the right to future profits and gains transferred to her children. And, the sons’ agreement to manage the company was the property received by the taxpayer in the recapitalization.

The ruling applied Section 2701’s subtraction method to determine the value of the gift. The gift amount was determined by taking the full value of the company and subtracting the fair market value (FMV) of the sons’ and grandchildren’s interests carrying distribution rights. The taxpayer’s distribution right was valued at zero; it didn’t reduce the value of the gift. Then, the taxpayer was deemed to have transferred to her sons a portion of that value based on the taxpayer’s relative ownership percentage as compared to the grandchildren. The ruling noted that the taxpayer could apply a minority discount to the value transferred, if appropriate.

The accountant preparing the gift tax returns noticed that the trust receiving the remainder interests in the GRATs would be includible in the taxpayer’s estate but was assured by the attorney that there was no tax problem. The gift tax returns were filed showing the transfers as completed gifts.

Years later, another attorney reviewed the taxpayer’s estate plan and the GRATs, noted the same problem and advised the taxpayer. The taxpayer then sought to reform the trust under state law to be irrevocable ab initio and requested the IRS to confirm the tax consequences of the rulings: (1) the children’s trust wouldn’t be includible in the taxpayer’s estate, (2) the transfers to the GRATs were completed gifts, and the transfers at the end of the GRAT terms wouldn’t be treated as additional gifts, and (3) the reformation wouldn’t cause any beneficiary to be making a gift to any other beneficiary.

The IRS approved the reformation to fix the gift and estate tax problems. It held that the affidavits made by the taxpayer, attorneys, accountant and financial advisors showed clear and convincing evidence that the reformation conformed to the taxpayer’s original intent, as he and the attorney intended the original gifts to the GRATs to be complete.

In CCA 201416007 (released April 18, 2014), the IRS ruled on whether an estate could claim the marital deduction for property in a portion of a foreign trust that the estate included as part of the spouse’s elective share. During his life, the decedent funded a trust in a foreign country for himself and his child. The trust was administered by a foreign corporate fiduciary and owned shares in foreign situs companies. The ruling provided that it wasn’t subject to the jurisdiction of U.S. courts.

After the decedent’s death, his spouse asserted her right to a certain percentage of his estate under the state’s elective share statute. However, her elective share exceeded the amount of property available in his probate estate and revocable trust. The executor filed an estate tax return that claimed a marital deduction for the entire elective share, making up the “shortfall” with property held in the foreign trust.

However, the spouse wasn’t a beneficiary of the foreign trust and had no access to the trust assets. The IRS ruled that because no part of the foreign trust property could pass to the surviving spouse and she had no beneficial interest in the property, under IRC Section 2056, no portion of the trust was eligible for the marital deduction, regardless of the elective share. It based its reasoning on the 2012 case, Estate of Turner v. Comm’r, 138 T.C. 306. In Turner, the Tax Court held that the value of family limited partnership interests included in an estate under IRC Section 2036 weren’t eligible for the marital deduction. The decedent gave the partnership interests to family members during his life. Although the value of the interests was includible in his estate under Section 2036, other family members owned the partnership interests at his death, and his surviving spouse had no beneficial interest in them. Although his revocable trust sought to maximize the marital deduction by using a formula, the Tax Court held that the marital deduction couldn’t apply to assets in which the surviving spouse had no beneficial interest. Similarly, in
CCA 201416007, the IRS held that the trust property that couldn’t be paid to a spouse wasn’t eligible for the marital deduction, even though the spouse was entitled, under state law, to a greater amount of the decedent’s property. Unfortunately for the spouse and the estate, the foreign trust thwarted both the elective share and the marital deduction.