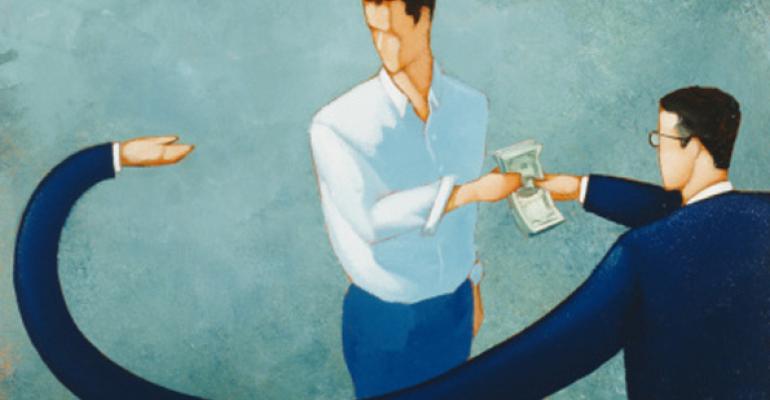 The April 1 deadline only applies to the year after clients turn 70 &frac12;. If retirement account owners don&rsquo;t take out at least the minimum amount, they could get hit with a penalty for as much as 50 percent of the required amount. Forgetful retirement account owners can file a Form 5329 with the IRS explaining the negligence was due to a &quot;reasonable&quot; cause.

There may be several advantages for clients who wait to withdraw money from their retirement accounts—up to a certain point. When clients reach 70 ½, they’re subject to required minimum distributions from tax-deferred retirement accounts.

Generally speaking, owners of IRAs, SEPs, SARSEPs, and SIMPLEs have to begin taking withdrawals from these accounts no later than April 1 of the year after turning 70 ½.

Some 401(k) and 403(b) owners may still be able to delay taking withdrawals at this point, as long as they are still working, own less than 5 percent of the employer running the plan, and the plan and IRS rules allow for the delay.

The April 1 deadline only applies to the year after clients turn 70 ½. If clients wait until that date to make their first RMD, they will have to take another one by Dec. 31 of the same calendar year—meaning two taxable distributions could occur in one tax year.

It may save the clients some tax money if they take a distribution in the year they turn 70 ½, and then another one during the next tax year.

Pay Attention, or Pay Up

If retirement account owners don’t take at least the minimum amount required by the IRS by the relevant deadline, they could get hit with a penalty for as much as 50 percent of the required amount.

For instance, if a client’s RMD for a particular year was $5,000 and she didn’t make the withdrawal, she could end up owing another $2,500 in penalties. Plus, she still has to take the $5,000 withdrawal and potentially pay taxes on it.

However, there may be a way for forgetful retirement account owners to avoid the penalty. They can file Form 5329 with the IRS, include a letter explaining that the negligence was due to a “reasonable” cause, document that proper measures have been taken, and hope for mercy.

The RMD amount is based on several factors, including the total of the owner’s retirement account balances as of the prior Dec. 31. For instance, a client with $500,000 in an IRA at the end of 2013 would use that amount to determine the RMD for the 2014 tax year.

The next step is to divide that figure by a number established by the IRS, and corresponding to the client’s age. There are two sets of tables: one for IRA owners whose spouse is the sole beneficiary of the IRA and is more than 10 years younger than the owner, and another for everybody else.

The divisor declines as the client grows older, ensuring that the RMD will represent a larger portion of the client’s retirement accounts as time goes on.

You can calculate the RMD on paper by using the IRS worksheet at tinyurl.com/rmdcalc, or try the online version offered by FINRA at apps.finra.org/Calcs/1/RMD.

Even when your client is certain he has calculated the proper RMD amount, you might suggest erring on the side of caution by withdrawing a little more than the minimum requirement.

The good news is that clients with several different IRAs aren’t necessarily required to take a proportional amount out of each one, although they can.

Instead, account owners only need to make sure that they take enough from one or more of the accounts to meet the total RMD. This feature can not only simplify the process but also help the clients avoid selling investments that they would rather keep.

However, clients who are required to take an RMD from a defined contribution plan, such as a 401(k) or 403(b), have to calculate (and withdraw) an amount from each one of those types of accounts, rather than aggregating them with any IRAs.

Moving More to a Roth IRA

One RMD question your seventy-something clients may ask is, “Can I convert it to a Roth IRA?”

No, they can’t convert it to a Roth IRA, but they can take a withdrawal that exceeds the RMD and convert that amount to a Roth IRA. Like the RMD, the excess amount will be subject to income taxes, but paying a little now may save a lot more later.

First, once the excess is transferred from the IRA to the Roth IRA, it won’t be figured in to the ever-rising share of the IRA that the RMD will comprise, nor will any earnings you are able to generate on the investments within the Roth IRA.

If the clients need money down the road, they can generally tap their Roth IRA without taxation, and without the withdrawn amount piled on top of their RMDs, Social Security, etc., potentially pushing them in to a higher income tax bracket than they would prefer to land.

But if they don’t need the money, there is no mandatory distribution age for Roth IRAs, and so the funds can remain in the sheltered account until the owners pass away. At which point, it becomes the beneficiaries’ money and problem.

Kevin McKinley is principal/owner of McKinley Money LLC, an independent registered investment advisor. He is also the author of the book Make Your Kid A Millionaire (Simon & Schuster), and provides speaking and consulting services on family financial planning topics.