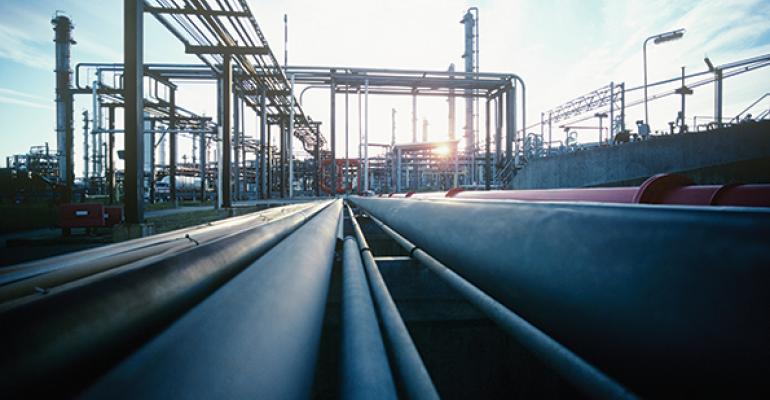 The quest for higher yields has put a spotlight on once-obscure vehicles called Master Limited Partnerships (MLPs). A distinctive business and tax structure has led these publicly traded partnerships to pay investors average yields of about 5 percent over the past 10 years, compared to the 2.4 percent average yield of the Barclays Aggregate Index during the same period.

Investors have taken notice: Total MLP market capitalization grew from $50 billion to more than $500 billion between 2004 and 2014. The potential for high yields is still attracting many investors to MLPs. At the same time, a second trend is driving growth in these vehicles—and it could make MLPs a valuable addition to a portfolio even if spreads with fixed-income investments tighten. That trend: the boom in domestic energy production.

The tax rules that created MLPs were designed to encourage private investment in energy projects. As a result, almost 80 percent of MLPs today are involved in building and operating energy infrastructure such as storage facilities and pipelines. The U.S. is now the largest producer of natural gas in the world, and is expected to overtake Saudi Arabia as the world’s largest oil producer in the next year—if it hasn’t already. The “mid-stream” infrastructure provided by MLPs is the backbone of that energy renaissance.

The industry is projected to spend $900 billion in new infrastructure over the next 12 years. “The incredible growth in oil and natural gas production has driven demand for MLP infrastructure,” says David Grumhaus, senior vice president and senior portfolio manager for the Duff & Phelps Select Energy MLP Fund. “That means great growth potential for MLPs for the foreseeable future.”

The projections are undeniably impressive. Yet investing in MLPs requires careful research and an understanding of their unique characteristics. There are roughly 120 MLPs trading today, and they offer a range of potential benefits and risks. Before placing clients into MLP investments, you must first determine whether the asset class is a good fit for their portfolios, and then identify the specific MLPs that suit them best. 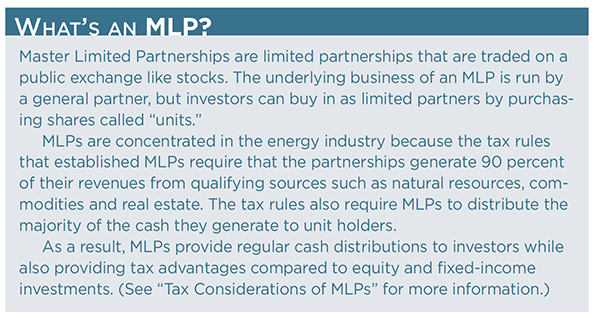 How MLPs Generate Returns for Investors

Investors buy into MLPs by purchasing shares that make them limited partners in the operation. Many investors and financial advisors consider MLP investments akin to fixed-income holdings because of their potential for steady, attractive yields. However, an MLP’s yield, unlike a bond’s, is not based on guaranteed interest payments. Instead, MLPs make regular distributions of the cash they generate from business activities.

For example, an MLP that operates a pipeline network might have a 10-year contract to move an oil company’s crude oil through its infrastructure. The oil company pays regular fees for that service, and the MLP distributes a majority of that cash flow, minus operating expenses, to its minority owners (called unitholders). Those distributions are not guaranteed, but historically they have been relatively reliable due to the long-term nature of industry contracts. “Those contracts let you project returns with a relatively low level of risk,” says Grumhaus.

What’s more, MLP distributions come with tax advantages compared to stock dividends or bond interest payments. The partnership structure means MLPs pay no tax at the corporate level. Instead, they pass income directly to the unitholders, who are responsible for paying taxes on it. However, special tax rules on MLP distributions mean that 80 percent to 90 percent of the cash unitholders receive is tax-deferred. (See “The Tax Considerations of MLPs” on page 73 for more information.)

MLPs also offer the potential for distribution growth over time. The MLPs that make up the Alerian MLP Index have grown their distributions by an average of 7.4 percent a year since 2004. A number of factors can boost MLPs’ cash flow and distributions, including increased demand for existing infrastructure, acquisitions and new project development.

“Distribution growth is where MLPs pull away from other asset classes,” says Rick Buoncore, managing partner of MAI Wealth Advisors in Cleveland. “Given the tailwind of domestic energy development behind them, that trend should continue.”

Analysts project that MLP distributions could grow an average of 5 percent to 7 percent a year for the next five years. As a result, many investors now are considering MLPs for their total return potential, not just their yields.

“We see an asset class with a 12 percent return profile for the foreseeable future at current valuations,” says Darren Schuringa, founder of Yorkville Capital Management, an RIA that specializes in MLP research and investing.

A Flexible Tool for Investment Portfolios

MLPs also offer the potential to enhance a portfolio’s diversification. Their unique characteristics have led MLPs to generate returns with relatively low correlations to other asset classes:

And although MLPs are concentrated in the energy sector, they have exhibited low correlation with other energy investments. The reason: Their long-term contracts help insulate MLP yields and total returns from fluctuations in oil and gas prices.

MLPs’ distinctive features make them appealing in many ways, but also bring important considerations for would-be investors. For example, professionals caution that MLPs should be considered a supplement to—not a replacement for—fixed income assets. “Although their yield and growth have been consistent in the past, there is still volatility inherent in these investments,” says Will Hershey, an analyst at Yorkville ETF Advisors. “You’re not just cutting a coupon, you’re getting a percentage of the operation’s cash flow. MLPs behave more like equities than bonds in that respect.”

MLPs may be attractive to high-net-worth clients seeking tax-advantaged investments. But potential MLP investors should understand that the securities’ tax benefits come with a wrinkle: MLPs report income to unitholders on Schedule K-1, which carries more complicated tax filing requirements than other types of investment income. Be sure that clients are willing to assume this responsibility before placing them in MLPs. Alternatively, you can recommend other MLP investment vehicles, such as funds and ETFs, that offer simplified tax reporting (see “MLP Funds, ETFs and ETNs,” on page 72, for more information).

The key takeaway: MLPs’ potential benefits are not risk-free. “MLPs may have a lower risk profile than traditional equities, but investors still need to weigh that risk,” says Hershey. “For clients comfortable taking it on, the upside is a combination of stable income and growth that’s hard to find almost anywhere else in the market.” 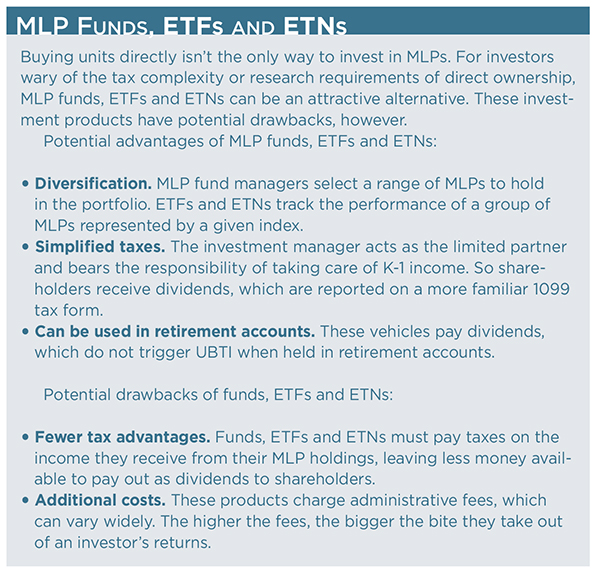 The same factors driving investor interest in MLPs have led to a boom in MLP creation. A decade ago there were roughly 60 MLPs, and they typically grew by acquiring existing infrastructure. Today the 120 MLPs on the market primarily seek growth by engaging in capital-intensive new infrastructure construction. Additionally, companies are taking advantage of expanded IRS rules that allow MLPs to operate higher-risk businesses such as refineries or ship fleets.

“Before the energy renaissance there weren’t that many risky MLPs out there,” says Brian Watson, senior portfolio manager and director of MLP research at Oppenheimer SteelPath MLP Funds. “Investors could expect to do well buying a collection of 10 MLPs without performing much research on the individual assets. Today, 10 names chosen at random might carry very different levels of risk.”

Meanwhile, investor demand for MLPs has driven valuations near or above their historic levels, according to Advisory Research Investment Management. High valuations make it essential to perform careful research and analysis before recommending a specific MLP investment to clients.

Your research should start with a close examination of an MLP’s business operations, which you can find in individual companies’ quarterly and annual SEC filings. Look for existing assets or those under construction to be in or near some of the booming areas of domestic energy production, such as Pennsylvania’s Marcellus Formation and the Permian Basin of West Texas. “Follow the money the exploration and production companies are spending and look for the MLPs positioned to build the assets those companies need,” says John Cusick, senior research analyst at Miller/Howard Investments, an investment firm that offers MLP investing strategies.

An MLP may not need to own infrastructure in a booming production area to reap the benefits. For example, a storage facility on Texas’s Gulf Coast could be in high demand to receive oil shipped from the Permian Basin. You can look for these relationships by examining the MLP’s contracts, which you can find in presentations from the MLP (sometimes posted on their websites) or regulatory filings. Also review contract lengths to assess the potential stability of distributions. The longer customers are locked in to using an MLP’s infrastructure, the more predictable its cash flow is likely to be.

After researching an MLP’s underlying operations, examine whether they are generating good returns for investors. While it’s tempting to look for MLPs with the highest yields, that approach can be risky, says Oppenheimer’s Brian Watson. The reason: An MLP that’s diverting a portion of its cash flow to develop new projects might have a lower current yield but better long-term growth prospects. By contrast, an MLP paying a very high yield might be diverting less of its cash flow for capital expenditures, and as a result could be jeopardizing long-term growth potential. 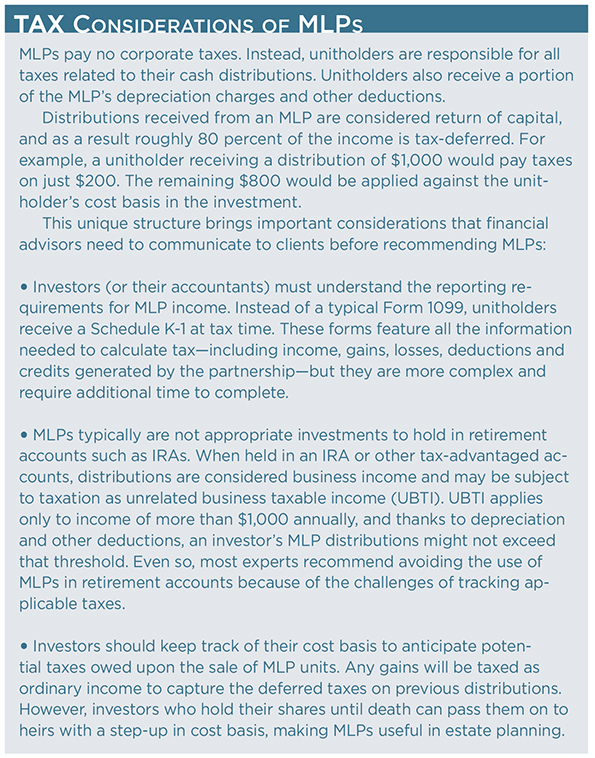 Many experts recommend focusing on an MLP’s distribution growth history rather than current yield.

When you find an MLP with an attractive asset base and distribution history, you can compare it to other potential MLP investments using valuation metrics such as Price to Distributable Cash Flow (P/DCF). P/DCF is calculated by dividing the MLP’s market capitalization by a year’s worth of distributions. As of mid-October, MLPs were trading at an average P/DCF of around 14x, slightly above their 10-year average of 13x, according to Yorkville Capital Management.

Another option for comparing MLP investments is distribution coverage ratio. This metric looks at the amount of cash an MLP has available after maintenance and debt expenses. The average distribution coverage ratio for the sector in mid-October was about 1.15x, which means that for every dollar in distributions, the company has $1.15 in distributable cash flow. Many investors look for ratios of 1.2x to 1.3x, which are considered high. A ratio below one means the MLP is paying more to shareholders than it has in cash—a potential red flag, as it often means an MLP is borrowing to maintain its distributions.

“Distribution coverage is a very important metric for understanding how secure an MLP’s distribution is,” says Chris Eades, managing director at ClearBridge Investments, who co-manages multiple MLP strategies. “It tells you how much cushion the firm has if there is an operational mishap or unplanned maintenance.”

While these ratios are helpful for comparing potential investments, analysts caution that they are somewhat blunt instruments and aren’t sufficient on their own to identify attractive MLP investments. But when paired with careful research into the underlying factors that could drive MLP growth going forward, they can help you navigate the new, somewhat more complex world of MLPs.

Investing in MLPs might require a little more homework than it did a decade ago, but that doesn’t change the appeal of this asset class. For the right investor, there remain opportunities to bolster portfolios with MLPs’ unique tax-advantaged income and growth potential.

“This has been one of the best-performing sectors over the last five years,” says David Grumhaus of Duff & Phelps. “But we’re comfortable that MLPs’ growth story still has a long way to go.