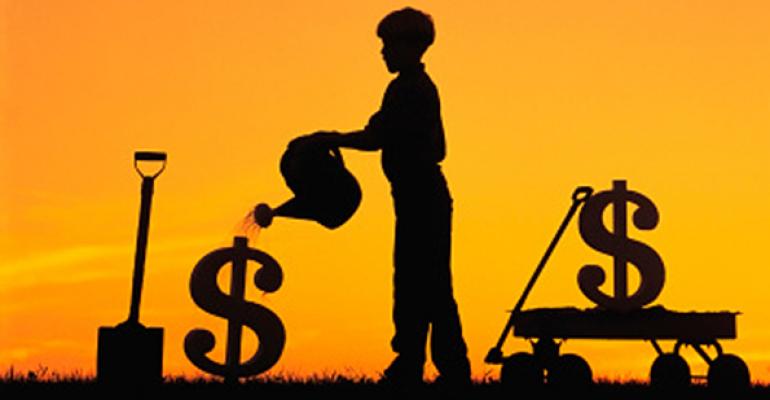 When and how clients save for their kids is just as important as how much.

Even if kids do start saving as soon as they start working, several valuable decades will have elapsed from the time they are born and when they begin saving.

But using the right vehicle and starting as soon as possible, parents, grandparents and other concerned family members can provide a lifetime of financial security for the children they love.

It’s better to start saving a little now, rather than a lot later. Say a client would like his newborn baby to be a millionaire upon turning 65, and can earn a hypothetical annual return of 7 percent.

But if the parents start saving for her on the day she is born, only $75 per month needs to be deposited. Those with some extra cash now can skip a lifetime of systematic saving, as a lump sum of $12,300 deposited at birth would also do the trick.

Which Way to Save?

If covering future college costs is the primary goal, then a 529 college savings plan is probably the best option.

But for parents thinking about goals beyond or instead of college, the 529 plan wouldn’t be appropriate, as penalties and taxes on non-qualified distributions may significantly impact the net return.

If the child in question is working, it’s possible to establish a Roth IRA for the kid. Benefactors can even contribute money to the Roth IRA for the teen, leaving him to spend or save his earnings however he wants.

However, once the child reaches adulthood, the Roth IRA is his to do with as he pleases; the money could be spent in ways that the parent or other depositor wouldn’t prefer.

Plus, deposits to the Roth IRA can’t be made unless the child has legitimate earned income, something that may not occur until decades after his birth.

Making deposits to a mutual fund in an account in the child’s name will allow the depositors to start sooner. And because gains and income will be taxed at the child’s rate, the tax bill should be relatively minimal (at least in the early years).

But that account still is owned by the child, and as with the Roth IRA, he can do whatever he wants with the money when he reaches adulthood.

A tax-deferred variable annuity (owned by the depositor, with the child as the beneficiary) would shelter any gains until the money is needed, and provide a no-probate transfer upon the owner’s death.

However, whenever money is taken out, any accumulated income or gains will be taxed at the recipient’s highest rate. And if the recipient is under age 59 ½ at the time of withdrawal, a big chunk of the earnings could be lost to penalties, too.

A better option may be a tax-advantaged mutual fund, such as the ones offered by Vanguard. The account should be owned by the parent/depositor, and perhaps the child in question can be named the beneficiary under a “transfer on death” designation.

The depositor can decide if, when, and how much money should be deposited to the account, and if and when it should be handed over to
the child.

Of course, that might not be until the child has reached retirement. But it also might work to have a portion given to the kid at various ages and stages of life.

For instance, let’s say a couple gives birth to a baby girl today, and they immediatelystart saving for her in a tax-advantaged mutual fund. When the kid is a teenager and has a job, they might choose to sell some of the fund to go into a Roth IRA for her.

Once she’s in college, they can of course tap the account to cover any needed costs. After she enters the workforce, they might decide to use some of the funds to motivate her to save money in a pre-tax retirement plan at work.

When she’s a little older and ready to settle down, they could give a portion of the account to her to use as a down payment on her first home.

The tax ramifications of this plan should be minimal. As long as the account owners give the child less per year than the annual gift tax exclusion (currently $14,000 per person), no gift taxes will be owed.

And if shares in the fund are gifted to the child and then sold, it is unlikely there will be any sizable taxes owed by the child on the sales proceeds.

In the meantime, the owners retain the right to use the funds however they please, and it’s unlikely that the account will have a significant impact on any need-based college financial aid that the child would otherwise receive.

This strategy likely won’t generate big fees for an advisor, either upfront or over time. But the parents or grandparents will appreciate the hard work to ensure the financial success of their children or grandchildren.