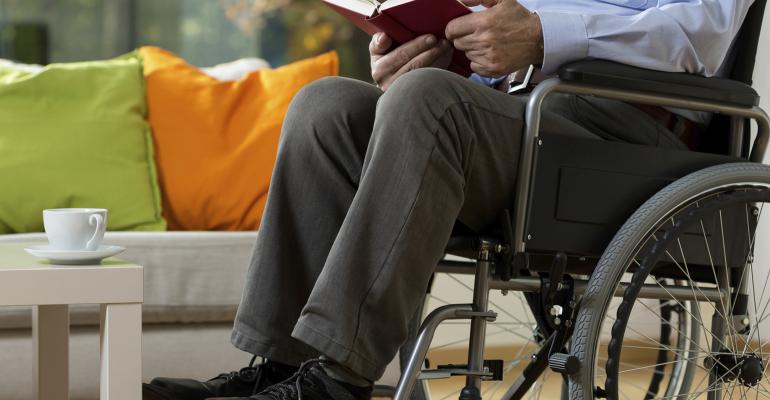 Will Individuals With Disabilities Be Forced Into Nursing Homes?

New CMS notice may cause major upheaval for clients receiving services and support in their homes.

On Nov. 9, 2018, the deputy administrator and director of the centers for Medicare and Medicaid Services (CMS) issued a notice regarding the sunset of certain provisions and protections that allowed married individuals with disabilities to receive services and support in their homes. While it’s unclear how states will implement the guidance issues, the mandate has the potential to cause major upheaval for many of the 3.2 million individuals nationwide who are receiving services and support in their homes.

LTC for Individuals With Disabilities

One series of waiver programs are those aimed at assisting individuals with disabilities of any age needing or wishing for long-term services and support in the community, such as home healthcare. The waiver programs allowed states to offer long-term care services in a home-based setting, which ideally reduce state costs and improve quality of life for those individuals by offering an alternative to nursing home placement.

While, by definition, waiver programs authorize the waiving of certain eligibility rules, in 2014, Congress mandated that certain rules protecting married couples be applied to married couples when one was applying for a waiver. The resulting mandate allowed a spouse not needing care to retain certain income and assets in the same manner as if the spouse needing care was entering a nursing facility, but without the resulting disruptive move. In many instances, the financial protection for the spouse not needing care, along with the waiver program, was the only way to avoid a move into a nursing home.

The 2014 mandate for spousal protections was only extended through the end of 2018. Therefore, beginning on Jan. 1, 2019, states are no longer required to distinguish between an institutionalized spouse (the spouse needing care) and a community spouse for purposes of the waiver programs. The notice issued by CMS states that the re-evaluation of all married couples should begin on Jan. 1, 2019.  Should the income or assets of a spouse not needing care be considered on re-evaluation, many married couples needing services and supports may find themselves forced into a nursing facility.

While the CMS mandate does state that re-evaluation should begin in January, the mandate also acknowledges that states will have the option to continue to allow for the protection of the spouse. At this time, it isn’t clear what states may choose regarding this mandate. State budgets have been squeezed for quite some time. Though the practical impact of this may temporarily reduce spending, over the long term, the election not to provide protections for the spouse without a care need will likely result in more people with disabilities needing care in an institutional setting that ultimately will have a greater impact on state budgets.

A number of advocacy organizations are working on a bipartisan solution to this potentially major problem; however, it’s difficult to predict whether Congress will act prior to the end of the year.  Until a solution is passed, clients with disabilities receiving these services should carefully review any notifications received regarding their services and be prepared for advocacy if necessary.