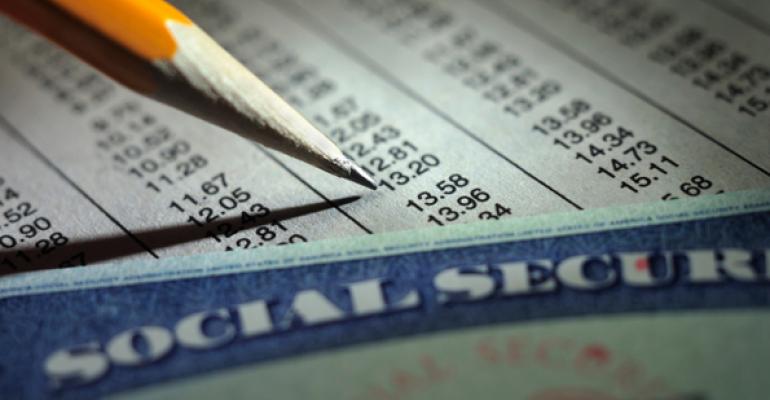 When Social Security Gets It Wrong

It’s one of the most important decisions about retirement your clients will make: when to claim Social Security benefits.

Financial advisors can add value by helping navigate the claiming process, but the rules are complex, and the guidance available from the Social Security Administration (SSA) has been the target of recent criticism.

The SSA came under fire last year by the U.S. Senate Special Committee on Aging, when key members pushed the agency to improve the guidance it provides on claiming decisions. The lawmakers were armed with a report from the U.S. Government Accountability Office (GAO) that found problems and inconsistencies in the advice that SSA claims specialists give to people applying for benefits, and on the agency’s website.

The report concluded that the SSA needed to be more proactive about informing claimants that Social Security benefits can be a hedge against longevity risk, and that they should lean more heavily toward advising delayed claiming.

An SSA spokesman notes that the GAO audit included six recommendations, largely related to how the agency trains employees to communicate with claimants about their filing options. He reports that the agency has since provided policy and training reminders to employees and updated its procedures. It also modified publications that provide guidance, including one that advises on claim timing and a frequently asked question on the topic.

Some of the critics are not convinced that the changes are sufficient. “The culture of the agency is to simply look at the benefits of the individual and her likely mortality,” says William Meyer, cofounder of Social Security Solutions, a fee-based service that helps workers optimize their benefits. “We believe you need to look at the spousal and survivor benefits—and the fact that not everyone will have average mortality,” says Meyer, who testified at the Senate committee's hearing last year.

Meyer and his partner, William Reichenstein, a professor of investment management at Baylor University, recently published the third edition of their useful book for planners, Social Security Strategies: How to Optimize Retirement Benefits.

The book reviews all aspects of claiming for single people, married couples, children, divorced spouses and the disabled. One of the most useful chapters focuses on the benefit application process, reviewing the options for applying online, by phone or in person, and necessary documentation for making a claim.

The chapter also includes an intriguing brief section titled “What if the Social Security Administration Doesn’t Understand the Strategy?” This section focuses on a strategy emphasized throughout the book that, in the experience of Meyer and Reichenstein, often leads to misunderstandings or confusion between claimants and SSA representatives: suspending benefits.

Some of this confusion stems from the passage of the Bipartisan Budget Act of 2015 (BBA), which marked the first significant change in Social Security claiming rules since 2000. The BBA eliminated two claiming strategies for some individuals, depending on their age: the controversial file-and-suspend maneuver, and restricted applications for one type of benefit. But the BBA left the door open for some people to take advantage of the old rules. Meyer and Reichenstein explain that there are now effectively three groups of Social Security claimants, divided by age:

File-and-suspend was available to the first group if they acted by April 29, 2016. This strategy permitted one spouse—usually the higher earner—to file for benefits and immediately suspend them at or after reaching FRA. This allowed a spouse (who had reached FRA) to file a restricted application for spousal benefits. Later (usually at 70), the higher-earning spouse would begin benefits, including delayed retirement credits. The lower-earning spouse would then convert to his or her own benefit at a later point, if higher.

A restricted application allows an individual to apply for one type of benefit—usually spousal—and switch later to a higher benefit. Executing this strategy requires an individual to have attained FRA, and the spouse must have already filed for benefits. Post-BBA, people in the first or second group can continue to file restricted applications if they have reached FRA, but people in the third group cannot do so.

Single claimants with short life expectancies should file at the earliest date possible. But for people with average or better life expectancy, waiting until age 70—or at least beyond FRA—is the right move. The authors illustrate that the “break even” for a single person is between 80 and 81. “If I’m worried about running out of money and my life expectancy is 85, it pays to wait one additional year to get the delayed retirement credit,” says Reichenstein.

The lifetime payoff can be very large. The authors offer an illustration of the cumulative lifetime benefit for an individual with a Primary Insurance Amount (PIA) of $2,000 who starts benefits at various ages, and with different mortalities. If that person lives to 90, for example, the cumulative benefit difference between filing at 62 and 70 is $129,600. With a mortality of 95, the additional payment rises to $198,000; if she makes it to 100, it is a whopping $266,400.

For couples, the spouse with the higher PIA should start benefits based only on the expected lifetime of the second spouse. If one spouse lives well past the point at which the higher earner turns 80, most couples’ cumulative lifetime benefits will be highest if the higher earner delays benefits until age 70. “The biggest risk people face is living a long time,” says Reichenstein, “so it is worth the risk of a slightly smaller lifetime benefit in the event that I only make to 85 to protect against the risk of living longer.”

Meyer and Reichenstein find that Social Security Administration agents sometimes are unfamiliar with the processes and combination of rules needed to implement strategies such as restricted applications. In the book, they detail the strategies, but also the corresponding rules in the SSA’s Program Operations Manual System (POMS), which is available on the agency’s website.

Meyer recommends that advisors urge clients to claim benefits online, since the process creates an electronic record. “We think it’s safer than filing over the phone or at the SSA field office,” he says. “It can be a bit daunting, and it needs to be done carefully, but it’s an area where advisors can add value.

“You engender a lot of trust, appreciation and gratitude,” he says. “Advisors often think that what they need to do to please clients is make sophisticated trades, but sometimes it’s just about being patient and making sure your clients understand that the claiming process has gigantic value.”