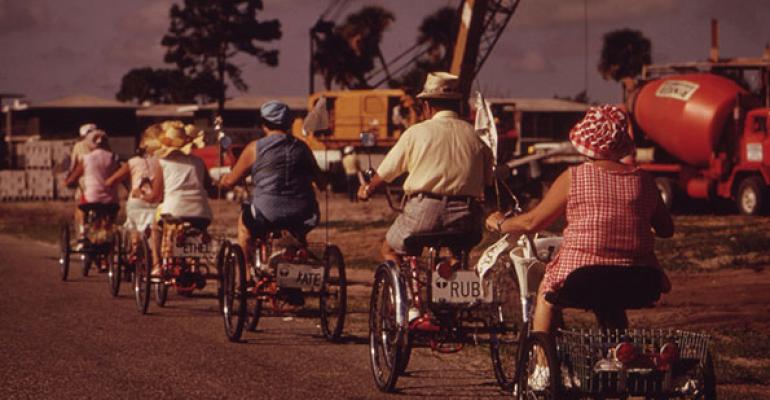 It’s almost a mantra of financial planning: Defer taxes on investments whenever you can, for as long as possible. The conventional wisdom is so ingrained that if you suggest clients accelerate taxes owed on 401(k)s and IRAs, you’ll get pushback.

But in some situations, it can make sense.

Consider this: Recent Vanguard research found that 20 percent of account holders who take Required Minimum Distributions (RMDs) from retirement funds put the money in taxable accounts. In other words, they aren’t spending it.

Vanguard did the study because it wanted to understand why so few retirement account holders tap those accounts for income. To illustrate the point, only 20 percent of retired households not yet required to take RMDs (ages 60-69) were nonetheless taking the withdrawals from IRAs or 401(k) accounts, according to a study for the National Bureau of Economic Research and the Social Security Administration’s Retirement Research Consortium.

The data make a solid case for planners to focus on acceleration strategies via Roth accounts—even for younger pre-retired clients—in order to gain flexibility in the drawdown phase, and for estate planning purposes. That can include Roth conversions, contributions to Roth IRAs or workplace Roth(k)s, or backdoor Roth contributions.

“It does make you think,” says Maria Bruno, senior investment analyst in Vanguard’s Investment Strategy Group. “What are the planning opportunities for people below the RMD age who don’t need the money for living expenses?”

“Paying taxes early has been something planners try to delay as long as possible, so the idea of paying it early is something people have a hard time with,” adds Kevin Ruth, head of wealth planning and personal trust at Fidelity Investments. “But when you run the numbers, for many clients it makes sense.”

Roth distributions don’t count toward modified adjusted gross income (MAGI). Although income often falls for younger retirees, it may go up when Social Security is claimed, or when defined benefit pension payments start. RMDs complicate the tax-planning picture in those cases, and can have undesirable side effects, including the 3.8 percent Net Investment Income Tax (applied to single-filing taxpayers with MAGI over $200,000 or $250,000 for married joint filers), Medicare high-income premium surcharges, and taxation of Social Security benefits.

“If it’s just an income tax play, it’s a hard discussion because most clients will be in a lower tax bracket in retirement than they are now,” says Ruth. “But when you add estate planning to the mix, the challenge is to get people to think longer-term. If they can agree that they won’t need some assets for their own retirement, the question is, what is the best asset to leave to your heirs—a traditional IRA or a Roth? And without a doubt, the answer is a Roth.”

From an estate planning standpoint, it’s advantageous to pass along assets without worrying about a future unknown income tax liability. And since no RMDs are required with a Roth during the account owner’s lifetime, accounts benefit from more years of tax-free growth—translating into larger inheritances.

Heirs also enjoy tax-free growth and tax-free distributions, although they must take RMDs under the inherited IRA rules. If the client has multiple children, consider opening a separate Roth IRA for each child, Ruth suggests. “If you pass along assets in a single IRA, the life expectancy of the oldest beneficiary is used to determine the RMDs. For the younger children, it’s much better to take advantage of that child’s life expectancy since they can enjoy more years of growth in the account.”

The best approach, some planners say, is a gradual, multi-year approach to conversion that starts early. Vanguard’s numbers suggest that the overall number of clients doing conversions remains low, but they do spike between age 60 and 70.

“We try to have these conversations with clients when they are in their 50s and just starting to think about the drawdown period,” says Joshua Kadish, partner at planning firm RPG-Life Transition Specialists in Riverwoods, Ill. “It becomes a two-part test around income tax planning for the client, and estate planning in cases where they don’t think they will need the assets.”

Conversions shouldn’t be approached as an all-or-nothing conversation, says Bruno. “You want to determine if a series of partial conversions would be beneficial—convert just enough to fill up to the top of the client’s current tax bracket.”

Also consider conversion in any year where a client’s income falls into a lower tax bracket, she says—such as when one spouse retires, or there’s an unexpected job loss.

Ruth notes that the Roth conversion recharacterization rules give planners another tool that adds flexibility. “If you do the conversion early in the year, you have until the following October—21 months—to recharacterize if the investments don’t perform well or the client winds up in a different tax bracket than expected.”

It’s not often in life you get a mulligan like that, but it’s a nice level of assurance for clients who may need to be convinced that accelerating taxes on their investments is, contrary to conventional wisdom, good for their longer-term financial strategies.