/sites/all/themes/penton_subtheme_wealthmanagement/images/logos/footer.png
Recent
Recent
Why the Shift to a Longer-Term ‘Business Owner’ Mentality Is Driving Movement
May 27, 2022
NYC Luxury Theft Boss Planned Own ‘Department Store,’ City Says
May 26, 2022
Seven Must Reads for the CRE Industry Today (May 27, 2022)
May 26, 2022
What’s the State of the Capital Markets for Cannabis Real Estate?
May 26, 2022
Featured
The 10 Best and 10 Worst States in Which to Retire in 2021
Jul 15, 2021
Poll: 15 Classic Books on Investing and the Markets
Apr 03, 2020
Fifteen Must-Listen Business Podcasts for Advisors
Aug 14, 2020
Celebrity Estates: Jay Leno and Planning for Classic Car Collections
Feb 22, 2022
Annuities
brought to you by 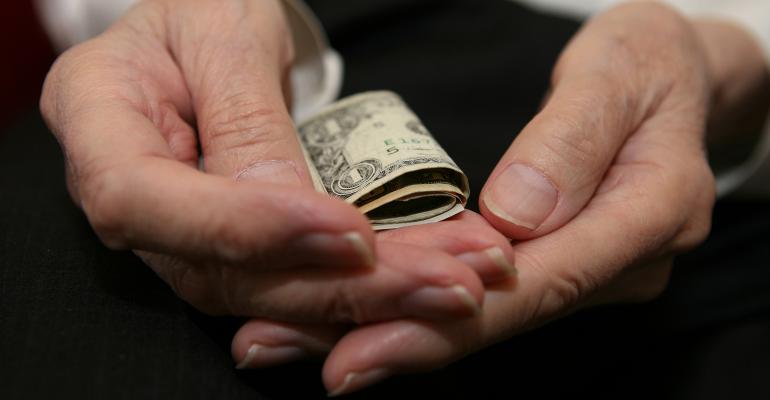 What Exactly is “Retirement Plan Failure”?

It’s tossed around routinely by financial professionals—but what does it really mean?

I’ve certainly used the term “plan failure” more than a few times, which is why a recent blog post by retirement researcher Dirk Cotton caught my eye.

In Three Degrees of Bad, Cotton separates out what he calls “three progressive levels of failure.” Those are: (1) loss of "market-funded" standard of living; (2) loss of standard of living below the household's "floor" income; and (3) bankruptcy. A fourth type of failure he describes is depletion of an investment portfolio, which is what many planners—and journalists—really refer to when they write about the risk of plan failure. Cotton, founder of JDC Planning, points out that portfolio failure can contribute to any of the other three types—or none of them, depending on how reliant your clients are on investments to support their standard of living.

“What most retirees want to achieve from a retirement plan is to maintain their standard of living through retirement no matter how long they live,” Cotton told me in an interview. “Leaving a legacy is probably the second most important goal for some, but not at all for others. So you can lose your standard of living due to various risks in retirement, but usually when you read about this topic it’s focused on sequence of return risk and probability of ruin, which refers only to the risk of depleting your investment portfolio before you die.”

The challenge for planners, Cotton thinks, is to sharpen communication with clients. “It’s important to communicate accurately about the problems and risks, and how we deal with them—because they are all separate risks.”

The most important retirement risks include longevity, inflation, health expense, long-term care and financial fraud. There certainly is market risk as well—stock market volatility, interest rate risk and sequence of return risk. But market risk might not impact your client’s standard of living, Cotton argues. Consider the example of an affluent retired couple with a $100,000 standard of living receiving $60,000 in Social Security benefits and $40,000 in fixed annuity income. “If that couple loses everything they have in the stock market, it wouldn’t have a huge impact on their standard of living, because [they] have secured that with financial products.”

There’s a risk of bankruptcy, but it’s low. Studies on older households filing bankruptcy aren’t very current, but research covering the years of the great recession found that household bankruptcy rates run about 0.05 percent; more than half of the filings stem from medical emergency costs.

“But we lump everything together into the same definition of a probability of ruin and say there is a 95 percent chance you won’t run out of money,” Cotton says. “The retiree doesn’t really understand the risks and where the probable risks are in terms of magnitude.”

Cotton’s observations point to the different risks facing households depending on their level of wealth. More affluent households may face more risk if they are more dependent on volatile market returns. Less affluent households, with little or no retirement savings, are more reliant on Social Security. While pre-retirement income replacement from Social Security is higher for these households, these households have less flexibility to meet financial shocks, such as an unexpected catastrophic health care need not covered by Medicare.

“Wealthy households can buy fixed annuities or a TIPS bond ladders alongside Social Security income, and guarantee a certain floor,” Cotton notes—that’s what he means by a “market-funded” standard of living. “They can invest the rest in the stock market—they may have a lot of market risk, but not standard of living risk.”

What risks should planners be discussing with clients? Longevity risk tops the list.

Expected longevity for men and women aged 65 has jumped more than 10 percent since 2000, according to the Society of Actuaries. Men who reach 65 can be expected to live to an average age of 86.6 and women to 88.8. And the numbers jump further for more affluent households. (The Society of Actuaries offers a good longevity forecasting tool that predicts longevity within broad bands using a set of simple inputs.)

Earlier this year, I asked retirement researcher Joe Tomlinson to calculate the risk of plan failure for affluent households using a mix of income from Social Security, savings and a Single Premium Income Annuity. For this exercise, we defined failure as lacking sufficient funds to pay for $70,000 of annual living expenses, falling $10,000 short of that number. The hypothetical household had amassed $1 million in 401(k) and IRA accounts.

A Monte Carlo analysis showed that even with this level of wealth, the household faced a 47 percent risk of exhausting savings during their lifetimes, assuming retirement at aged 65 and claim Social Security benefits at that age. That was before any emergency costs for medical care or a large home repair.

Delaying the Social Security claim brought down the plain failure risk to 38 percent and also reduced the lifetime gap in living expense; adding the SPIA reduced those risks to zero.

Debt is another rising risk. Recent research by the Federal Reserve Bank of New York found that debt held by borrowers between the ages of 50 and 80 increased 60 percent from 2003 to 2015. And recent research by Olivia S. Mitchell of The Wharton School and Annamaria Lusardi of The George Washington University School of Business finds that more than one-quarter of adults aged 62-66 say they have too much debt, and 23 percent report feeling financially fragile. Nearly half worry about running out of money in retirement.

No wonder that confidence surveys continue to reflect worry among workers about their level of retirement preparation. Thirty-nine percent of workers are not confident they have enough money for a comfortable retirement, according to the annual survey of the Employee Benefit Research Institute. And 30 percent report that preparing for retirement causes them to feel mentally or emotionally stressed.

Words like “failure” and “ruin” only throw fuel on the fire. Use them with care.