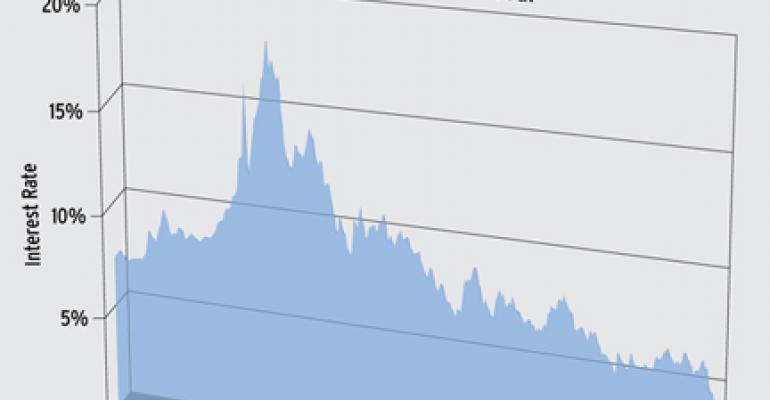 With mortgage rates at a 40-year low, it's a great time to start refinancing the mortgage, but be sure to use the proceeds of the loan wisely.

It will be a long time, if ever, before we know if the government's recent efforts to lower long-term interest rates were an effective kick-start for the ailing economy. What is more likely to be the result of pumping a trillion or so dollars into circulation is that, eventually, inflation will rear its ugly head — and so too, will the higher interest rates that typically follow.

One of the simplest ways your clients can protect themselves in this scenario is to refinance their mortgages right now, for as much and as long as their friendly lender will allow. Here's why, and what they should do with the proceeds.

Some “help” from Uncle Sam

Back in March, the Federal Open Market Committee announced plans to purchase hundreds of billions of dollars of Treasury and mortgage-backed securities. In the short term, one of the effects of this move was that long-term interest rates dropped to lows never seen before — especially the rates on 30-year home mortgages (see graph).

The lending giant Freddie Mac said that the 4.78 percent rate available nationally on 30-year loans at the end of April was the lowest figure noted since they began tracking it almost forty years ago.

If these low rates and high doses of dollars lead to inflation, clients might feel like their homes are appreciating in value, as they will be worth more in nominal dollars. But anybody who was able to stay awake through Econ 101 knows that in “real” dollars (that is, adjusted for inflation), the house might not be appreciating at all. Add higher interest rates to a falling dollar, and even the wisest homeowners could actually experience a real decline in the value of their real estate.

Clients can of course hedge against higher inflation by buying investments focused on precious metals, commodities, or natural resources. But since the inflation scenario may never come to fruition, it's probably not prudent to put more than a small portion of a client's assets into such less traditional areas.

A more palatable, sensible, and effective solution might be for the client to get a 30-year fixed mortgage, and to pay it off as slowly as possible. Then, if and when inflation does come about, each fixed monthly payment will technically be in the same dollar amount, but in dollars that are of course falling in value — while the value of their home gets inflated upward.

By itself, the new mortgage should help the clients profit from inflation, instead of getting beat by it. But clients can improve their financial futures even more by making shrewd moves with the proceeds from the loan.

Back to the bank

Some clients will be rightfully concerned about pulling equity out of their most cherished asset in the midst of financial turmoil. For them, the simplest destination for the mortgage proceeds may also be the smartest. Going directly to a traditional bank or credit union with the money will allow them obtain federally-insured CDs, with usually no more than a three- or six-month penalty for pulling the money out before maturity.

In the meantime, they can use the money to pay for expenses that would have otherwise forced them to borrow money at higher, non-deductible rates (i.e., a new car). Or, if they get too anxious about the mortgage, they can cash in the CDs to pay the loan off.

Clients who are more worried about long-term retirement plans than they are about some short-term investment volatility have an opportunity to receive a greater amount of both immediate and long-term gratification by maxing out their at-work pre-tax retirement accounts.

Funding a 401k or 403b up to the maximum ($16,500 for 2009, $22,000 for those over 50) will not only reduce this year's taxes by up to 40 cents for every dollar deposited, but it will hopefully provide a large, tax-sheltered profit when equity prices eventually return to the levels of a few years ago. And to those clients who may be nervous about adding this money to the market at this juncture, you can point out that saving more aggressively allows them to then invest more conservatively.

Converting an IRA to a Roth IRA allows clients to pay the tax bill on the retirement funds now, when both tax rates and account values are likely lower than they will be at some point in the future.

If clients are short on the cash needed to pay Uncle Sam's tax bill for the conversion, they can use their mortgage proceeds now, and then slowly repay the loan over time.

And once in retirement, the clients can pull the money out of their Roth IRAs tax-free for any purpose — including retiring the mortgage more quickly than otherwise necessary.

Those clients doubting the likelihood of future inflation obviously haven't been tracking the cost of higher education over the past few years. According to the College Board, over the last ten years, published tuition rates at public schools have risen 4.2 percent per year faster than the Consumer Price Index.

Ideally, the clients can use some or all of their mortgage money to fund a conservatively-invested 529 account, and ensure that future gains and income in the account will be sheltered from taxation, and future qualified withdrawals will be tax-free.

But at a minimum, tapping their home equity now and safely socking away the proceeds ensures that they'll have money available for future college expenses, borrowed at historically-low rates of interest, which might also be tax-deductible.

There are a couple of things your clients should know before they head out in search of a new mortgage. First, rates are historically lower but lending standards are higher than recent years. So your clients should first check their FICO score and report for errors at www.myfico.com.

Second, taking out the 30-year mortgage instead of the 15-year option will give them not only a lower monthly payment, but fifteen more years to keep the loan going if they should so need.

Finally, as tempting as it may be, the extra monthly money or lump sum provided by the new mortgage is best used to increase liquidity, cut future borrowing costs, reduce taxes, and hedge against inflation.

But they shouldn't bet the house to try to make a quick buck. That, obviously, is one of the lessons learned in the latest bust.

Kevin McKinley
CFP© is Principal/Owner of McKinley Money LLC, an independent registered investment advisor. He is also the author of the book Make Your Kid a Millionaire (Simon & Schuster), and provides speaking and consulting services on family financial planning topics. Find out more at www.advisortipsheet.com.