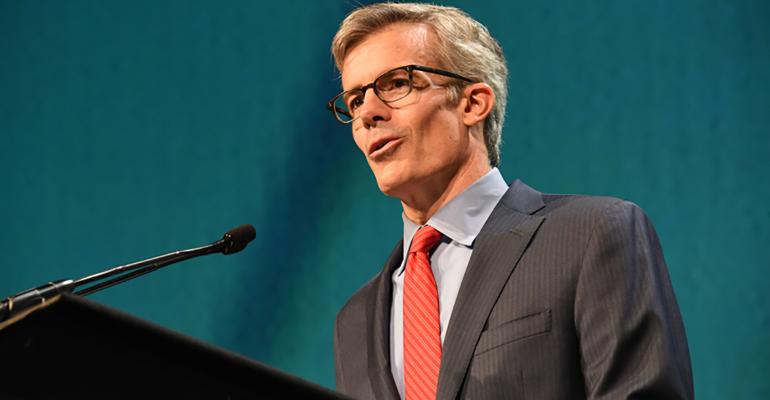 Vanguard's Buckley: We May Offer PAS to Third-Party Advisors

Customized advice is crucial to better investor outcomes, the CEO told our retirement columnist Mark Miller. And as it has with investment management, Vanguard is looking to lower the cost of that advice, either through PAS or, possibly, letting outside advisors use the platform.

The Vanguard Group seems to be swallowing the fund business whole these days—and it also has eyes for the advice business.

That was a key takeaway from a sit-down with Tim Buckley, Vanguard’s chief executive, at last week’s Morningstar Investment Conference in Chicago. Buckley did an “ask-me-anything” session with a small group of journalists, so I took the opportunity to inquire whether he thinks the U.S. is facing a retirement crisis—a perennial topic among retirement policy folks and the subject of a session at the conference. In response, he pivoted straight to a favorite Vanguard topic these days: the importance of advice to improve retirement outcomes.

“We can always do a better job of helping retirees, and I think advice will play a huge role in that,” Buckley said. “Technology is going to play a big role, and the price of advice is going to fall and make it easier for people to get quality answers to their questions and problems.”

Vanguard already is running the table on target date funds (TDF), according to Morningstar data released at the conference. Vanguard finished 2018 with $650 billion in TDF assets—close to 40% of the market. That’s up from 36% last year. Vanguard’s market share in TDFs has jumped 10 percentage points since 2013, and its position today in that business is nothing short of astonishing.

These days there are TDF providers that provide products with costs as low as Vanguard, or even lower, notes Jeff Holt, Morningstar’s director of multiasset and alternative strategies research. But Vanguard continues to benefit from a reputational effect—it has become the safe choice for plan sponsors. “It’s easier these days to go to your board of directors and tell them that you chose Vanguard than someone else,” Holt says.

TDFs provide advice to 401(k) plan participants, even if it is one-size-fits-all. And Buckley thinks TDFs will remain dominant for the foreseeable future. “TDFs are easy to implement—they provide a robust answer at a really low price,” he said. “It’s going to take a lot to unseat them.”

But customized advice is his candidate for what comes next. Just as TDFs and exchange traded funds (ETFs) disrupted choices like stable value and money market funds, Vanguard sees opportunities to transform the advice business in a way that improves retirement outcomes.

Vanguard already has a partnership with Financial Engines to provide advice to workplace plan participants.

At the retail level, its Personal Advisor Services (PAS) grew 63% in 2018, to $106 billion in assets under management (AUM)—and it grew another 23% in the first quarter this year, to $130 billion. PAS combines personal one-on-one advice from a Vanguard financial advisor with technology that keeps costs down. “You should expect us to expand that further,” Buckley said.

In fact, Vanguard may soon offer all or parts of the PAS technology platform to third-party advisors, he said. “The technology behind PAS is largely digital, and there's a lot we can do with that both in terms of helping plans and helping advisors.

“Advisors come to us all the time saying, ‘Hey I see that PAS platform—I like it, and I’d like to get that same technology,” Buckley said. “We're building the next generation of this in modules so that it could actually be used by advisors. If we can help lower the cost of advice, we’ll do that, even if it’s not directly through our own advisors.”

So what about that retirement crisis? A session at the conference was devoted to the question, featuring several key Morningstar experts. Eight-seven percent of audience members responding to an instant poll indicated they think there is a crisis, but the panel had diverging opinions.

David Blanchett, Morningstar’s head of retirement research, noted that retirees generally report that they are satisfied with things. “They’re a happy bunch of people,” he said. Indeed, 82% of retirees are confident they will have enough money to live comfortably throughout retirement, according to the latest Employee Benefit Research Institute (EBRI) confidence poll.

Steve Wendel, Morningstar’s head of behavioral science, is in the “pro-crisis” camp. He acknowledged that there are many ways to slice the available evidence. “But if you take a step back, you see that over half of Americans will not have a comfortable retirement.”

Wendel’s research shows 74% of Americans are not on track to have enough money to meet their needs in retirement, and 55% of affluent households will fall short. And this finding relies on best-case assumptions about retirement savings, Social Security solvency and steady employment before retirement.

I find the term “retirement crisis” far too general to produce good answers. Most mainstream research shows that affluent U.S. households will have enough in savings, Social Security and even defined benefit pension income to do just fine in retirement. The rest will be very reliant on Social Security. And it’s true that Social Security replaces higher amounts of preretirement income for middle- and lower-income retirees than it does for the affluent.

Still, the average Social Security benefit this year is $17,500. Combined with the pressures of rising health care and housing costs, that doesn’t look like much to live on.

Spin it forward to future decades, and the picture deteriorates further.

Future generations of retirees are less likely to have defined benefit pensions and will receive less income replacement from Social Security. That has nothing to do with the looming shortfall in Social Security’s finances—the reductions were baked into the cake by the last round of reforms in 1983, which raised retirement ages and added taxation of the benefit for the first time. Those changes translate into a slow-moving, phased reduction in income replacement rates. The Center for Retirement Research projects that preretirement income replacement rates for an average earner retiring in 2030 will be just 36%, compared with 41% in 2002.

Saving shortfalls also look worrisome. Forty percent of workers tell EBRI they have less than $25,000 saved for retirement. Only about half of retirees are covered by a workplace retirement plan. The percentage of workers with defined benefit plans is falling. And we’re facing a severe shortage of affordable, age-appropriate housing as the country gets older.

CRR maintains a National Retirement Risk Index (NRRI), which measures the percentage of working-age households at risk of being unable to maintain their preretirement standard of living in retirement. The NRRI is built using data from the Federal Reserve’s Survey of Consumer Finance and finds that half of households are at risk. And the NRRI optimistically assumes all retirees annuitize their savings and tap their home equity via reverse mortgages—steps that very few actually take.

Wendel’s research examined a broad range of steps individuals and financial advisors can take to improve outcomes; the most effective were changing one’s standard of living in retirement, delaying retirement or increasing saving rates (as compared with, for example, chasing alpha or worrying about asset allocation).

But he also found that personalized advice is essential, because it helps households avoid cookie cutter answers.