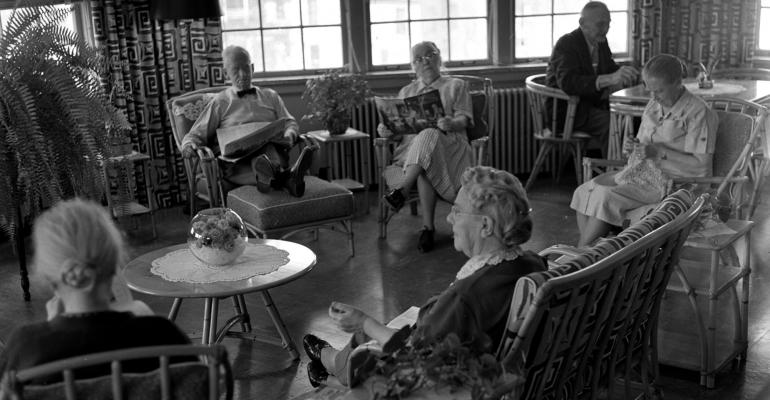 Americans are more likely than ever before to enter retirement carrying debt, which leaves them vulnerable to rising interest rates.

CHICAGO (Reuters) - U.S. interest rates finally are on the rise after a decade stuck near zero - and that should be good news for retirees who need yield on safe investments like certificates of deposit and money market accounts.

But higher rates will not be welcome news for all retirees.

Americans are more likely than ever before to enter retirement carrying debt, which leaves them vulnerable to rising interest rates. A recent study coauthored by Olivia S. Mitchell, executive director of the Pension Research Council at the Wharton School of the University of Pennsylvania, finds that growing debt obligations of older households leave them vulnerable to rising rates - and that an increasing share of their incomes will need to go to servicing debt.

No doubt, the yields available on savings are showing signs of life after a decade when ultra-low interest rates were a key tool used to stimulate the economy following the Great Recession.

The Federal Reserve raised short-term interest rates three times last year - most recently in December - and most economists expect several more rate hikes in 2018. Consumer yields on certificates of deposit and money market funds will rise, although not as quickly as loan rates. Still, rate shoppers interested in a one-year CD this week can find deals ranging from 1.65 percent to 1.80 percent, according to Bankrate.com. Three-year deals can be had around 2 percent.

Mitchell’s study is based on data from the University of Michigan Health and Retirement Study. She found that the rise of home prices over the past two decades, and the growth of easier mortgage products are key factors driving increasing debt burdens among older households.

“Real estate has played a very important role in this,” she said. “More expensive houses are a very large factor in the rise of debt. We’re also seeing people with larger mortgages on the larger houses - the old rules of putting down a certain down payment have changed.

Conventional wisdom holds that retirees should shed as much debt as possible - of any kind. But all debt is not equal, and some debt is relatively safe and can improve your liquidity - for example, a low-rate fixed mortgage that represents a relatively small portion of a home’s value and that could be paid off if necessary.

But in the emerging rising-rate environment, a key question is how much debt being carried by older households carries variable rates, leaving borrowers exposed to substantial jumps in rates?

Mitchell’s research suggests that 20 percent of all U.S. consumer debt is variable. The most worrisome figure: 40 percent of households aged 62 to 66 reported carrying credit card debt in 2015. That was down slightly from 2012, when 43 percent of this age group carried credit card debt, but still quite high. Carrying balances on cards is especially dangerous; as the balance grows, interest rates get higher, and credit ultimately is cut off.

One factor driving these numbers is what Mitchell and her colleagues call “financial fragility” - the inability to respond to an unexpected financial shock. For example, 36 percent of households aged 56-61 said in 2015 that they could not come up with $2,000 within a month’s time to meet an emergency expense; 23 percent of households 62-66 said the same thing.

Roughly 20 percent of households aged 56 to 61 have unpaid medical bills, reflecting the rising cost of healthcare. “When you’re considering whether you’re ready to retire or not, a key thing is to understand is that medical costs are going to be high,” Mitchell said.

She also thinks the debt statistics point to the need for greater financial literacy. Her previous research on this topic measures literacy by posing three basic questions about the workings of compound interest rates, how interest rates interact with inflation and how to avoid stock market risk. Only one-third of test-takers are able to answer all three questions correctly.

But other factors are at work.

Social Security benefits have become less valuable over time as a result of reforms enacted in 1983 and the growing share of benefits consumed by Medicare premiums. Fewer households have access to defined benefit pensions, and many households have not been able to accumulate savings - 47 percent told the Employee Benefit Research Institute last year that their total household savings and investments were less than $25,000.

Retirement stresses are especially acute among older minority households. They are far less likely to have access to workplace retirement saving accounts than their white counterparts, and their rates of home ownership are far lower.

Taken together, the data underscores the need for a holistic approach to financial planning as retirement draws near - one that balances spending needs with short- and long-term goals. If you are approaching retirement age carrying dangerous debt - a variable mortgage or credit card with a high balance - reorder your financial plan to focus on minimizing or eliminating it. Smart strategies include favoring debt reduction over saving or downsizing your home.

Working longer also can play a big role. More years of earnings not only provide income to pay down debt, but set the stage to maximize your retirement income through delayed filing for Social Security benefits.