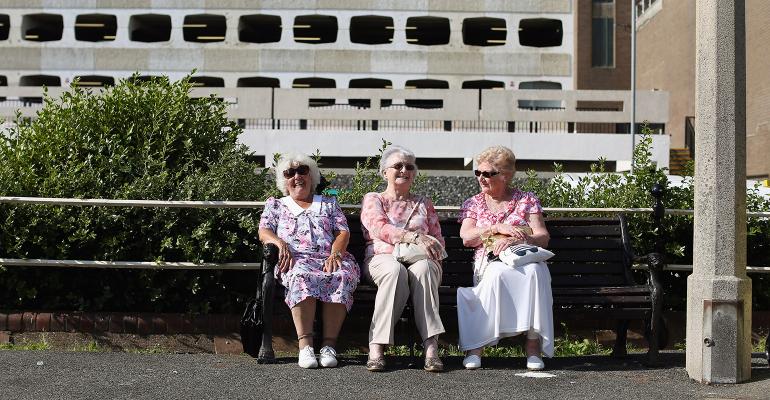 Unmarried Women No Longer Pay a Financial Penalty in Retirement

Younger female boomers are doing better than their predecessors, but there’s a catch.

(Bloomberg Opinion) -- On the retirement front, a new study has some good news for unmarried women: They’re no longer falling behind their married peers. Still, it’s tough to celebrate equality when it seems to be driven mostly by the falling fortunes of men.

Studies about how prepared US workers overall are for retirement tend to be incredibly depressing — and even more so when they focus on women, who say in staggering percentages that they’re worried about running out of money. Much of this has to do with women earning less, taking more time out of the workforce and living longer than men.

The retirement prospects for women who are single or divorced have long been even more dire because married couples who pool their resources are often wealthier. But a recent report by economists at the Center for Retirement Research at Boston College shows that for middle-class baby boomer women, staying single no longer carries the financial penalty it once did.

Younger boomers who have spent most of their adult lives single (either because they remained single, got married later, or divorced) are catching up to their married counterparts.

But there’s bad news, too: A big part of the reason they’re catching up isn’t just that they’re doing better. It’s that married men are doing worse. “The large decline in median wealth for women who spend their lives mostly married largely reflects declining fortunes for their husbands,” the researchers said in a blog post.

Remember, the gender wage gap has been shrinking not only because women’s wages have grown but also because men’s earnings have stagnated.

The key metric in the Boston College report is the income replacement rate, which shows whether someone can maintain the same standard of living in retirement. It looks at how much of a woman’s pre-retirement income would be covered in retirement if she effectively annuitized her wealth (from sources such as financial assets or future Social Security or pension plan benefits).

For the Silent Generation women who preceded the baby boomers and have been married most of their adult lives, the income replacement rate was 44% when they were 59 to 60 compared with 36% for those who had been mostly single. For younger married boomers (those born between 1960 and 1965), the income replacement rate drops to 35% at age 59 to 60 compared with 33% for their single peers.

Part of this reflects boomer women’s higher earning power; but it also reflects the fact that boomer men suffered high unemployment rates and long bouts of unemployment during the Great Recession, often during their prime earning years.

It’s important to note that the data come from a long-term study that interviews people older than 50 every two years. The most recent interviews used for the Center for Retirement Research’s report are from 2018, so they don’t take into account the big stock market gains from 2018 to early 2022. That appreciation may have helped married couples, who are more likely to own securities investments.

Still, the study focused on middle-income people, who tend to have more of their retirement income derived from Social Security rather than stock assets.

And Social Security benefits can complicate these metrics for married women. For those who never worked, their income-replacement rates may be higher. That’s because even though they don’t have any pre-retirement income of their own, they’re still eligible to receive their own separate Social Security check in retirement (equal to 50% of their spouse’s benefit). For married women who have worked, their income-replacement rates have declined because they have higher pre-retirement income relative to what they may be eligible for from Social Security.

The fact that women who choose to stay single or wind up getting divorced aren’t doomed to poverty in retirement is a relief. But that seems like a pretty miserable bar.