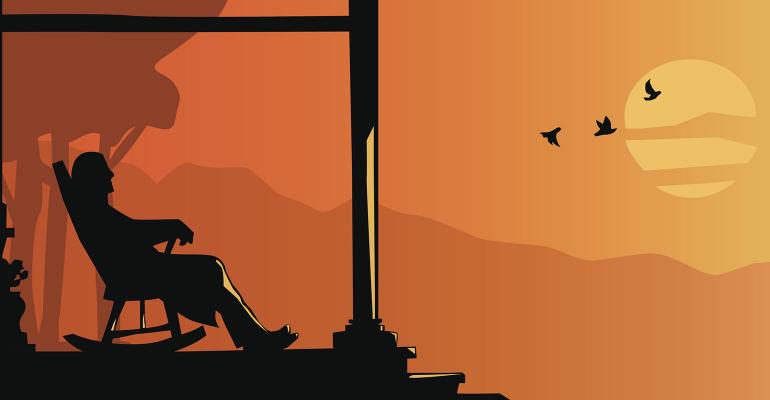 Only 41 percent of workers have even tried to figure out how much they need in savings to retire comfortably.

(Bloomberg) --Setting a retirement savings goal can feel like a crap shoot. How can you calculate your expenses, especially for health care, five, 10, 50 years from now?

If you've punted, you have company. Only 41 percent of workers have even tried to figure out how much they need in savings to retire comfortably.

And those who have? When asked to guess how much they needed, 37 percent of workers say $1 million or more, according to the latest (and 27th) Retirement Confidence Survey from the Employee Benefit Research Institute. That's up from 19 percent who said they'd need that much only a decade ago. The survey, done in January, is based on online polling of 1,082 workers 25 and older and 589 retirees.

How much people figure they'll need rises with income. Fifty percent of workers with household income of $75,000 or more say they'll need at least $1 million, compared with 17 percent of households with income under $35,000. EBRI doesn't have data on how many people actually wind up retiring with a nest egg of $1 million or more, but it does have a database of 401(k) plans that covers roughly half the market, and it shows that 10 percent of plan participants have at least $200,000 stashed away, said Craig Copeland, a senior research associate at EBRI. For people in their 60s, it's 30 percent. Even that is a very small minority of American workers.Many will never get near the $1 million mark without a huge savings push. Asked about their current savings, not including the value of a primary residence or a defined-benefit (old-fashioned) pension plan, only 20 percent of workers said they had saved $250,000 or more. Forty-seven percent had saved less than $25,000, and 24 percent of those people had saved less than $1,000. Rules of thumb for how much to save for retirement are a starting point for planning, if only that. Savings is often framed as the percentage of your pre-retirement income you'll need to live on per year. Many people will figure on 70 percent or 80 percent, but that may be low. EBRI's research director, Jack VanDerhei, has suggested people may need more like 100 percent of their pre-retirement income to live on—assuming they don't need long-term care. He thinks we often underestimate medical costs.

Even if people have a tough time calculating how much to save for retirement, a majority of retirees surveyed (53 percent) said that expenses, excluding medical bills, were about what they'd expected when they retired. About a quarter of retirees said costs were somewhat higher, and 13 percent chose "much higher."

The survey didn't ask the retirees for specific dollar amounts they were spending on retiree health care. Fidelity estimated last August that a 65-year-old couple retiring in 2016 could spend an estimated $260,000 on medical expenses in retirement. That doesn't include money needed to cover long-term care, which could cost that couple another $130,000. That's almost $400,0000, without even bringing housing into the equation. And don't forget food.

A common refrain when workers are asked about how they'll fix a savings shortfall is to work longer. EBRI has found, however, that many Americans retire before they planned to. In this latest survey, that figure was 48 percent. Health problems or disability were cited by 41 percent of those who retired before they expected to, and 26 percent pointed to changes at their company, such as downsizing or closure. Another 14 percent left earlier than planned to care for a spouse or other member of their family. Retiring earlier than expected may mean programs such as Social Security and Medicare become a bigger part of your income stream. Only 6 percent if the survey's respondents say they're very confident that the Social Security benefits they get will be at least equal to what retirees get today. Sixty-one percent said they weren't too confident of it, or not at all confident (41 and 20 percent). For Medicare, the percentage of workers in those categories combined was also 61 percent. Seventeen percent were not at all confident. For the first time in the survey's history, EBRI used an an outside vendor's online panel instead of a random phone survey. People surveyed over the phone tend to choose "very confident" more often, the report noted, while online respondents lean toward "somewhat confident." Online, it said, people tend to "provide more honest, less flattering responses."