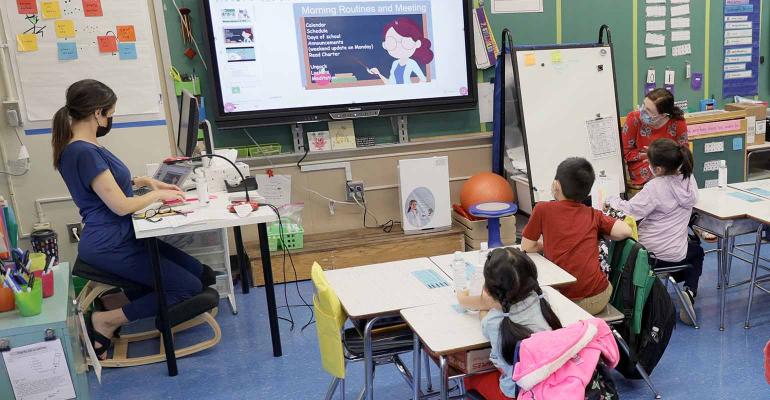 Access to a pension doesn’t guarantee financial security in retirement like it used to. Just look at the system for New York City teachers.

(Bloomberg Opinion) -- Even in 2022, pensions still command an aura of reverence. A benefit where you work for one company for 30 years and then retire with a livable wage? And you don’t have to fret about picking investments? What’s not to like?

Although pensions are increasingly rare in the U.S., they’re not obsolete. About 38% of the private workforce had access to a defined benefit plan in 1980. By 2008, that had fallen to 20%. In spring of 2020, it was only 3% of private-sector workers, according to the U.S. Bureau of Labor Statistics. The majority of today’s pensions are offered to those working in the government at a state or federal level.

Related: Teachers Are Getting Schooled on Retirement

When evaluating a potential job today, should pensions carry as much weight as they did decades ago? In most cases, no, not for those early in their careers. Many modern pensions have been diluted to the point of being mediocre golden handcuffs. It’s often better to focus on the total benefits package instead.

Pensions, after all, are complicated. Most require a combination of years of service, a vesting period and hitting a certain age to receive the maximum benefits.

The tiers have differing rules and eligibility criteria, with older tiers being able to access maximum benefits with less of a time commitment.

Actual retirement allowances can vary too. The calculations can get complex, but the required additional time commitment and the penalty for retiring before 63 generally makes Tier VI’s benefit less generous than Tier IV’s.

In short, younger generations of teachers are being asked to put in as much or more time, for less of a pension benefit. Of course, one could argue that current teachers have higher salaries, but that’s mostly due to cost-of-living adjustments, so watering down their benefits is even more damaging when accounting for future inflation. Other industries have also seen pensions become harder to fully maximize.

Because having a pension no longer guarantees financial security, millennials and Gen Z should consider saving for retirement in additional ways. This could mean contributing to a Thrift Savings Plan (TSP), Tax Deferred Annuity (TDA), 403(b), or an IRA.

Having multiple retirement pots is important for two reasons. First, it ensures you’re truly prepared for the type of life you’d want to live in retirement. A pension alone may not provide enough for what you deem as comfortable. Second, it can set you up to be less dependent on having to stay in a job until your pension vests or reaches unreduced benefit, especially if it’s proving toxic or becomes physically difficult. The sunk cost fallacy can rear its ugly head once a teacher — or any employee — has put in, say 10 years, and begins to believe it’s too hard to switch jobs and they might as well stick it out for the pension.

Early-career employees should also evaluate all the benefits available. Even if a pension alone is not a strong selling point, the overall benefits package just might be.

United States Postal Service workers, for instance, can contribute to a TSP — which is similar to a 401(k) — and receive up to a 5% employer match in addition to their pension plan. Their non-retirement benefits are also compelling as they include quality health care with dental and vision, flexible spending accounts and life insurance. Employees can enroll in long-term care insurance, which is fairly expensive to secure privately.

Investing for retirement outside of a pension gives you flexibility to change career paths or to retire when you want. It also helps hedge against the mismanagement of pension funds or underfunded pensions. Nearly 200 pension plans are on the U.S. Department of Labor’s list of pensions in peril.

The pensions of Boomers and older Gen Xers are not the same deal current workers will inherit. There’s no question that younger workers got a raw deal. They will be better served calculating a pension’s true value and evaluating other benefits of the job, especially access to health insurance in retirement.

To contact the author of this story:
Erin Lowry at [email protected]