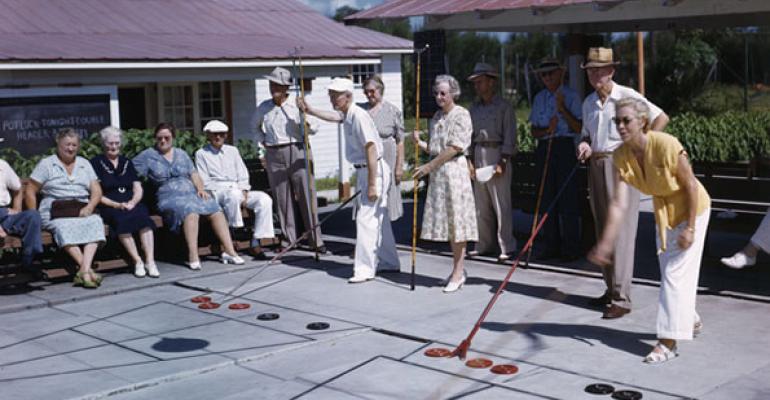 Ten-Fold Gain in Retirement Saving? No Thanks, Say Republicans

The Senate can help protect the future retirement of millions of Americans by doing nothing.

CHICAGO, March 23 (Reuters) - At the risk of stating the obvious: People are much more likely to save for retirement when they can do it automatically at work. How much more likely? Ten times, according to a study released this week.

But someone apparently forgot to tell U.S. Congress and the White House, because both are moving to block millions of workers from getting that opportunity. Any day now, the Senate is expected to approve a resolution - already passed by the House - that throws a roadblock in front of states preparing to offer government-sponsored, low-cost retirement saving plans to people who do not have them at work.

President Donald Trump has pledged to sign the resolution - but the Senate could do something important for the future retirement security of millions by rejecting it. In fact, all it needs to do is - nothing.

If the Senate does not act, a ruling issued last year by the Department of Labor (DoL) goes forward. It makes it easier for states to launch programs that would require employers without their own plans to set up payroll deductions for automatic contributions to a publicly run IRA account. The rule exempts state plans from the Employee Retirement Income Security Act of 1974 (ERISA) if they meet certain conditions. That provides important reassurance to employers participating in the plan, who worry about compliance cost and legal liability under ERISA.

This is the latest in a series of anti-consumer, pro-Wall Street moves coming out of Washington since the Republican Party consolidated its control in January. The Trump administration also has moved to throw the brakes on the fiduciary rule that requires financial advisers to act in the best interest of clients.

In addition, Republican lawmakers are aiming to curtail the oversight powers of the Consumer Financial Protection Bureau, which - among other achievements - last year exposed a massive fraud against customers by Wells Fargo (http://reut.rs/2mp9QPX)

Opponents of state auto IRA plans in the financial services industry argue that consumers need the protections of ERISA. But that does not hold water, since most IRAs are not covered by ERISA. Their real concern is that they do not want to see a lower-cost government-sponsored “public option” to the retirement products they sell.

They further argue that the public option plans would have an unfair competitive advantage over private plans. But the tax incentives for employers to provide plans would continue to be much larger than for an IRA, and employers would be prohibited from making matching contributions.

Research by the Employee Benefit Research Institute (EBRI) confirms that the impact of auto IRAs would be modest compared with 401(k)s, because they generally default to a relatively low contribution rate (3 percent of pay) and have opt-out features for workers.

The expected rule rollback will not stop the seven states that already have enacted auto IRA programs from proceeding, but it will create uncertainty for them - and could discourage other states from starting plans.

Auto IRAs have the potential to help 55 million people gain workplace coverage, AARP estimates. And here is the irony: just as the Senate prepares to pull the rug out from under auto IRAs, the aforementioned “factor of ten” research was published - indicating just how badly these plans are needed.

This week, EBRI issued its 27th annual Retirement Confidence Survey - the longest-running annual study of how well American workers are doing with retirement planning. Confidence among workers dipped last year despite the strong stock market - the share of workers who say they feel very or somewhat confident about their retirement prospects fell from 64 percent to 60 percent, and overall confidence is still well below where it was before the Great Recession.

Even more troubling, 47 percent say their total household savings and investments total less than $25,000, including 24 percent who have less than $1,000.

Successful planning is correlated strongly to availability of a workplace saving option. As mentioned, workers who participate are 10 times more likely to be saving currently, and they have significantly higher savings.

But availability is falling. Another study released this month looked at retirement plan coverage among households near retirement age (51-56), finding that it shrank from 70 percent in 2004 to 63 percent in 2010. Conducted by the Center for Retirement Research at Boston College (CRR), the study is based on data from the Health and Retirement Study, an ongoing longitudinal survey of older Americans sponsored by the National Institute on Aging and the Social Security Administration.

CRR also found that the shift away from traditional pensions to 401(k) and IRA accounts has mainly benefited people with more education and wealth. In 2010, some 52 percent of wealth in defined contribution plans was held by the top quartile of the households measured by education. By contrast, 35 percent of wealth from traditional pensions was held in the top quartile.

All of this at a time when Social Security is projected to replace less income in the years ahead due to higher retirement ages, and as medical costs and longevity are both are rising.

The trends underscore the need for state auto-IRA plans to proceed, said Alicia Munnell, CRR’s director. "Everyone needs to save for retirement to supplement Social Security, but half of private sector workers do not have an employer-based retirement savings plan at any given point, and few save outside of workplace plans.”

She added: "Since the federal government has not acted to close this enormous coverage gap, states are stepping into the breach to help their own citizens." (Editing by Matthew Lewis)