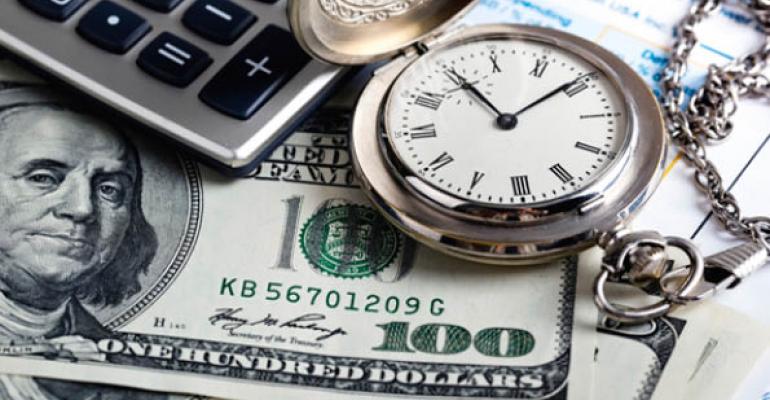 For a plan&rsquo;s QDIA, traditional target-risk funds are being rapidly eclipsed by target-date funds. Consultants need to help sponsors navigate the change.

An advisor recently told me that his strong preference was for clients to install target-risk funds as the qualified default investment alternative (QDIA) in their plans whenever possible. Target-risk funds (TRFs), also called balanced, lifestyle and life strategy funds, let participants choose the asset allocation and risk profile that best suits their unique circumstances. In contrast, he argued, target-date funds (TDFs), also called life-cycle funds, surrender that control to an arbitrary age-based allocation and glide path under the fund manger’s control.

His reasoning made sense, but the data show that plan sponsors disagree. According to the Towers Watson 2014 Defined Contribution Plan Sponsor Survey, U.S., TDFs have been gaining QDIA market share relentlessly in recent years. Here are the stats:

The ratio wasn’t always this skewed in favor of TDFs. Kevin Jestice, head of Vanguard Institutional Investor Services in Malvern, Pennsylvania, points to 2005, the last year before the Pension Protection of 2006 took effect. In 2005, 45 percent of the plans on Vanguard’s recordkeeping platform offered TRFs and only 28 percent offered TDFs. “You see that mix shift immediately in 2006 and really, the 2006 to 2010-2011 period is where you saw a dramatic increase in the number of plans offering target-date funds,” he says. “There’s been a very gradual decline in the number of offering target-risk because many added target-dates without removing the target-risk.”

Participant behavior is one reason for the shift to TDFs. David O’Meara, senior investment consultant with Willis Towers Watson in New York City points out that when plans offered TRFs, participants tended to pick the middle option in terms of allocation and risk. For instance, if a plan offered multiple TRF options that ranged from income through balanced to growth, most participants picked the balanced option or whatever similar fund occupied the middle of their plan’s choices. This occurred even if the participant’s circumstances indicated that another fund was better choice.

“One thing that we noticed in participant usage of target risk funds is that they by and large pick the moderate risk fund and they never change,” says O’Meara. “That may be perfectly appropriate for some individuals; however, for other individuals their life circumstances change, their capability of bearing risk changes as they move through their career, maybe not year over year but certainly decade over decade. We found (that) defined contribution participants, they tend not to go back into the defined contribution plan and revisit that risk setting decision.”

Susan Viston, client portfolio manager for Voya Financial’s Multi-Asset Strategies and Solutions Team in New York City notes that because a plan can offer only one fund as the QDIA, sponsors tend to pick the most conservative option in TRF portfolios’ suites. Combine that decision with the fund selection “stickiness” participants exhibit once they enroll, and it’s possible that a 25-year-old participant will adopt and maintain the same investment risk profile for years as a 65-year-old.

TDFs resolve both problems from the plan’s perspective. Most participants have an idea of their hoped-for retirement date, Jestice observes, but the concept of risk tolerance doesn’t “translate as cleanly” for participants. Additionally, most participants aren’t actively engaged with their plans and identifying their risk tolerance means making another decision, something they prefer to avoid. In contrast, it’s easy to identify the TDF closest to a projected retirement date and let the fund manager make the investment decisions. TDFs are designed as single-fund solutions and once participants enroll, inertia increases the odds they’ll stay with the fund and put the funding on autopilot.

Given plans’ shift to TDFs, should plan consultants drop TRFs from consideration? Viston says the trend indicates that sponsors often prefer to streamline their plans with an either-or approach to avoid having too many investment options that can confuse participants. In her experience, plan consultants are overwhelmingly recommending TDFs as the default option of choice. While TRFs aren’t likely to disappear, none of the sources anticipates a turnaround in their QDIA-adoption rate relative to TDFs.

Instead of focusing on the TRF versus TDF decision, Viston believes consultants can continue to add value by helping clients navigate the spectrum of TDF offerings. She notes that TDF managers’ philosophies and approaches can lead to drastically different exposures to return and risk over time in different market environments. Consultants can also help sponsors decide whether an off-the-shelf or potentially a customized solution would be a better fit. “Plan consultants are tasked with helping a plan sponsor navigate which target date fund is most appropriate for their participants based on the various aspects of target date design, including glide path, asset allocation, underlying managers,” she says. From that perspective, the TRF-TDF issue becomes much less important.