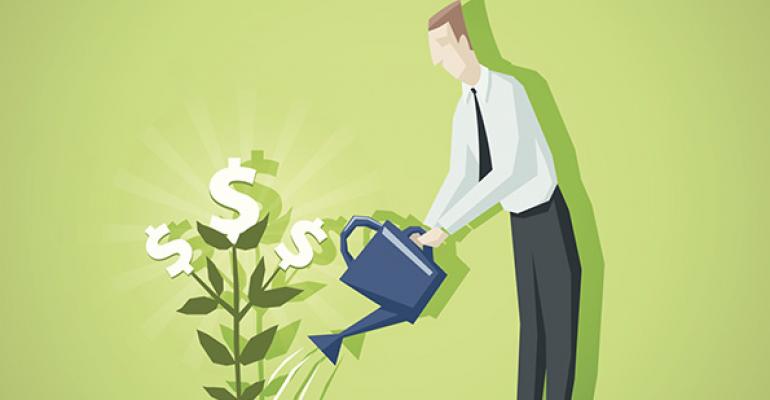 Tapping Annuities for an Early Retirement

Even when clients have a surplus of annual income to save towards an early retirement, the limits on retirement plan contributions don’t allow an amount necessary to achieve it. But annuities can offer nearly unlimited savings potential and unique benefits that can pique the interest of would-be early retirees.

Here are four methods of using annuities to help clients who want to stop working sooner rather than later:

Most workers should first contribute to pre-tax at-work retirement savings plans (such as 401(k)s and 403(b)s) to the greatest degree possible. Those clients who are eligible should then look to Roth IRAs, and can even fund one for a spouse without earned income.

But after those options have been exhausted, clients with additional liquid assets might want to consider setting any non-qualified money aside in a variable annuity.

Of course, there is no tax-deduction provided by depositing money into a variable annuity that isn’t designated as an IRA. But once the funds are in, the tax savings begin. As long as the funds are left in the variable annuity, there will be no tax liability from any gains, interest, or income generated by the internal investments.

Clients are also free to rebalance within the underlying variable annuity sub-accounts, again without worrying about unnecessarily increasing their tax bill.

Would-be early retirees might also be concerned that a decline in their investment accounts before or after their target retirement date could diminish the amount of income available when the clients quit working, and even delay their retirement for several years.

But a common add-on available in many variable annuities may offer the clients some peace of mind. Many variable annuity providers offer the option of a guaranteed minimum income and/or withdrawal amount, usually for an additional cost. The payouts can be based on the amount of money deposited, or on a “stepped up” valuation based on an appreciated amount.

Another option along these lines that may be appropriate for certain investors is an equity-indexed annuity, which will allow the client to participate in a portion of any prospective gains in the underlying index, while attempting to limit any losses associated with future declines.

Clients seeking security can use fixed-rate annuities to complement the more-aggressive portions of their portfolio.

They should also consider such ultra-safe investments as certificates of deposit, via a bank, credit union, or brokerage account. But the fixed-rate annuities do have some advantages over those CDs.

For starters, CD interest is taxable in the year that it is earned, even when the owners don’t need or withdraw the money.

But the interest earned on fixed-rate annuities will be sheltered from taxation, as long as it’s left in the account. Then when the clients retire and need the money, they will likely (by definition) be in a lower tax bracket.

Another potential plus is that if clients need or want to liquidate brokered CDs before maturity, the price received is not guaranteed and could be substantially lower than the face value. However, many fixed-rate annuities often have predetermined penalties for early withdrawal, and some offer penalty-free withdrawals for a portion of the accumulated account value.

You can offer clients an extra layer of interest rate protection and flexibility by building a “ladder” of fixed-rate annuities that will mature successively in the years after the clients plan to retire.

The most important type of annuity, at least for early retirees seeking to replace absent paychecks, is the immediate annuity.

When the immediate annuity is funded with non-qualified new money deposited as a lump sum, it can provide early retirees with additional income, minimal taxes and no penalties.

For instance, let’s say you have a 50-year-old couple who want to retire now and need $1,800 per month in supplemental income to last them for the next 10 years.

According to the calculator at ImmediateAnnuities.com, they could deposit $200,000 now and receive that amount guaranteed over the 10-year period. And less than 10 percent of that $1,800 payment will be taxed as ordinary income.

The payment schedule can be customized to last until one of several milestones in the early retiree’s timeline, such as when the clients have reached age 59 ½ and can then withdraw money from retirement accounts or other annuities without incurring a 10 percent penalty. Or the immediate annuity payments could be coordinated to end when the clients turn 62 and are eligible for Social Security.

The Drawbacks of Annuities

As attractive as annuities can be for those saving for a retirement at any time in the future, there are a few issues that you and your clients should consider.

First, the many benefits offered by annuities should be weighed against any additional costs and potential drawbacks that may not be inherent in other investment alternatives.

You and your clients should also know that any withdrawals of gains, income, or interest from an annuity will be treated as taxable income, and if the withdrawals are made before the client turns 59 ½, the amount may be assessed with an additional 10 percent penalty.

Withdrawing money from annuities to fund retirement at any age can also involve consideration of the client’s age, IRS regulations and allowances, and any restrictions imposed on withdrawals by the terms of the annuity contract.

If it seems that tapping annuities to pay for an early retirement are more complex than using them to save and invest for that goal, you’re right. And if your clients realize that, they’ll need your help then just as much as they do now.