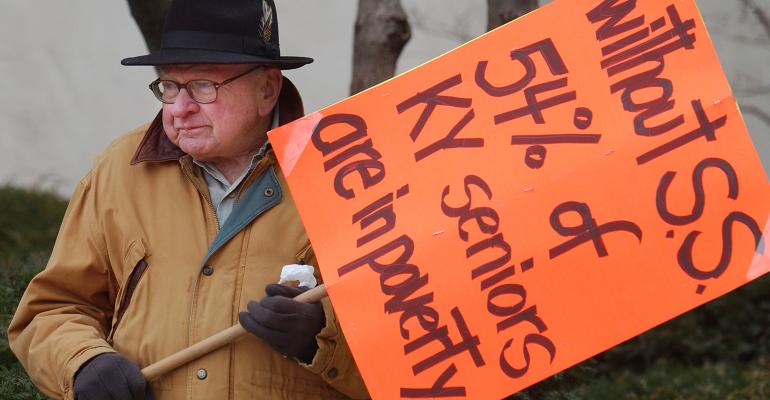 In Some States 15% of the Population Collects Social Security

Last year, 14 states had a population made up of more than 15% retirees. Vermont, Maine and Florida had the highest proportion.

(Bloomberg) -- Baby boomers are retiring and calling in their chips.

The Social Security Administration paid out $85.3 billion in March to more than 63.3 million people, according to the Social Security Administration. About 70% of the payments went to retirees and the remainder was for survivor benefits and disability insurance. On average, a retired worker collects $1,467.17 per month which is $17,606 annualized.

The number of recipients has increased as the baby boomer generation reaches retirement age. Last year, retirees receiving payments grew 3% percent versus 1.9% percent growth in the U.S. workforce, according to estimates from the U.S. Census Bureau and the Bureau of Labor Statistics.

Retirees, widows, disabled workers and some children who qualify receive a monthly stipend through SSA programs. The money comes mainly from payroll taxes but also from reserves the SSA set aside known as the trust funds. Because of changing demographics -- a historically low birth rate, increasing number of retirees and the fact that the average new retiree will live to age 85 -- these reserves are projected to run dry by 2035, according to recent estimates.

Social Security will start relying entirely on taxpayers’ money when the trust funds reach zero. The data show that on a cash-flow basis, the system already is paying out more than it takes in. Last year, the negative cash flow was $80 billion. That meant the Treasury had to borrow $80 billion so it could redeem Social Security trust fund securities to keep benefit checks flowing.

When the Social Security trust funds reach a zero balance the program will not be able to meet its obligations in full. This means when today’s 51-year-olds reach retirement at age 67 in 16-years, beneficiaries will face a benefit cut unless Social Security’s costs are curtailed, the program’s revenue increases or some combination of the two is enacted. "At that point, all beneficiaries will face a 20% across-the-board benefit cut, which will grow to 25% over time," according to the Committee for a Responsible Federal Budget.

The first wave of baby boomers began reaching retirement age in 2011 impacting U.S. demographics dramatically. Two years earlier, no state population had more than 15% of social security retirees but that’s all changed. Last year, 14 states had a population made up of more than 15% retirees. Vermont, Maine and Florida had the highest proportion.

Migrating baby boomers are also contributing to robust population growth in some areas of the U.S.

The Villages in Florida, a popular retirement community in Florida’s 11th Congressional District, is home to one of the fastest growing areas in the country. Retirees collecting social security made up a third of all residents in that district last year.

Three southern Congressional districts have the lowest percentage of people collecting Social Security. Texas’ CD-29, in the eastern portion of the Houston metro area, is the lowest at 6.48%. It’s followed by California’s CD-40 in east-southeast Los Angeles at 6.77%, the most Latino district in the nation, and Arizona’s CD-7 at 6.92%.