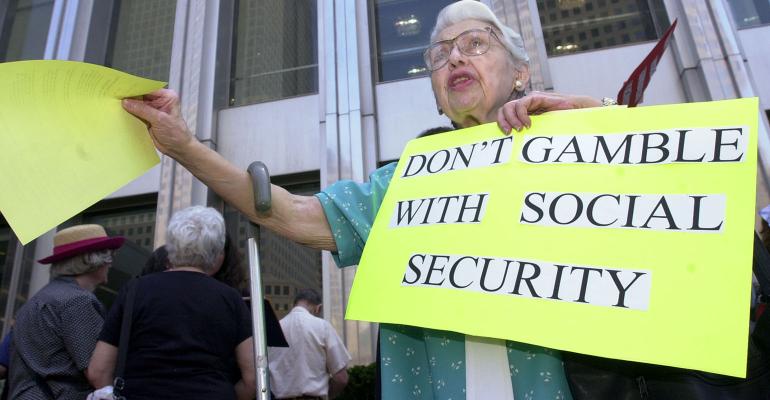 Solvency is the 800-pound gorilla in the room.

With fewer retirees receiving income from defined benefit pensions, the lifetime annuity income from Social Security will be even more important in the years ahead in protecting seniors from longevity risk.

But Social Security faces problems. The big issue is long-range solvency. The combined Old-Age, Survivors and Disability Insurance trust funds are projected to be exhausted in 2034; at that point, beneficiaries would face a sharp across-the-board benefit cut, or Congress would need to approve an emergency injection of new revenue. An earlier solution could involve new revenue, a reduction of benefits or a combination of both.

Beyond the solvency question, other Social Security redesigns could also help improve retirement outcomes of lower- and middle-income workers who haven’t been able to save for retirement. On the left, advocates favor a broad expansion of benefits, financed with new revenue. On the right, proposals call for benefit cuts via a higher retirement age and less generous cost-of-living adjustments. Another idea that makes sense is to allow the Social Security trust fund to invest a reasonable portion of the trust fund in equities—a move that could bolster solvency and fund expansion.

But more targeted ideas also have been proposed. AARP recently unveiled winners of a Social Security innovation challenge grant. More than 30 researchers submitted proposals to strengthen the program; and five winners were selected, with each receiving up to $30,000 each in cash awards.

Social Security’s projected long-range shortfall is driven by a change in the ratio of workers paying into the system compared with retirees drawing benefits. Fertility rates have fallen and so there are fewer workers for each beneficiary. Moreover, income inequality has driven a higher share of total U.S. wages outside of the amount subject to payroll taxes ($128,700 in 2018). This year, the maximum wage level covers 82 percent of aggregate wages, according to the Social Security trustees, down from 90 percent when Congress last determined the maximum that should be covered in 1977. If taxes still covered 90 percent of aggregate wages, the taxable maximum wages this year would be $282,900, according to Social Security’s actuaries.

None of this is news—Social Security actuaries have been forecasting these changes for many years.

Trust fund exhaustion doesn’t mean that Social Security would be bankrupt, as some politicians like to claim. But at the point of exhaustion, revenue would be sufficient to cover only 75 percent of scheduled benefits. Pre-retirement income replacement rates would fall from 36 percent to 27 percent for the typical 65-year-old worker, according to the Center for Retirement Research at Boston College. That would be a very sharp drop to a level not seen since the 1950s, CRR notes.

The problem is manageable if we get our political act together. Social Security’s trustees project that the program’s costs will rise from 5 percent of GDP now to about 6 percent of GDP as the baby boomers retire—not an outsized expenditure for an aging nation.

Republicans favor raising the full retirement age to 69, cutting benefits for higher earners, and cutting the cost-of-living adjustment by eliminating it for high earners, and by using the “chained CPI” index to adjust benefits for everyone else. Democrats have proposed gradually increasing the payroll tax rate, lifting the cap on payroll subject to taxation. They also would increase benefits modestly by using a more generous COLA, increasing special minimum benefit for low-wage workers and by lifting the threshold for benefits subject to income taxation.

Social Security reform sooner than later would be good for the program’s long-range health. But considering the level of political dysfunction in Washington, there is no guarantee that will happen. Nobel Prize-winning economist Peter Diamond predicts that a last-minute solution is likely when we get close to the point of exhaustion. Diamond, a professor at MIT, who has written extensively on Social Security, thinks Congress will authorize Social Security to borrow from the U.S. Treasury to make up the shortfalls, with a legislative promise to repay the funds in full from future revenue increases or benefit cuts.

That would mark a sharp departure for Social Security, which is entirely funded by the payroll tax. The only alternative at that point, Diamond says, would be a sharp, immediate four percentage point increase in payroll tax rates. “That would not be good for the economy, or welcomed by workers who pay the taxes and vote. Borrowing will be politically very hard to avoid—it will be irresistible.”

The AARP challenge grant winners didn’t address solvency, although some of the plans would have a small positive or negative impact. Rather, they focused on smaller issues and problems within the program. (The detailed plans are available on the NASI website.)

The idea here is to encourage people to delay claiming and work longer which could enhance their retirement benefits. But converting a portion of benefits to a lump sum would undermine the most important feature of Social Security—the lifetime annuity. Coupled with Social Security’s annual COLA, it is the best thing most people have going to hedge longevity risk.

Olivia S. Mitchell, a professor specializing in retirement research at The Wharton School, and a co-author of the lump-sum proposal, acknowledges this trade-off. “The vast majority of people don’t delay their claim, but the idea here is to get them to delay,” she said. “They aren’t going to do it through the annuity as it is currently structured, but they tend to like lump sums.” She also stressed that the plan would offer a hybrid annuity and lump sum. “We didn’t completely lump sum it, so someone could just take it all and blow it in Vegas.”

Developed by researchers at The New School in New York City, workers would contribute an additional 1.86 percent of salary at age 40, rising to 3.1 percent at age 50. The employer share of the tax burden would not rise. Workers would be defaulted into this program with an opportunity to opt out.

The New School plan addresses the falling pre-retirement income replacement rate in the years ahead due to higher retirement ages and taxation of benefits, along with expected increases in Medicare Part B and D premiums. The catch-up plan would help a bit. Low earner would see a 7.2 percentage point gain in replacement rates (compared with 3.8 percentage points for higher earners).

A third award-winning proposals would credit workers when they take a break from employment to be caregivers, when they are unemployed or receiving job training. Two others would revise Social Security’s minimum benefit for low-income workers.

Finally, two non-cash award runner-up plans were showcased—both authored by AARP researchers. One would create a supplemental savings account within the Social Security system designed to help workers meet living expenses while delaying their benefit applications. The other would provide Social Security benefits for workers going back to school later in life.

For my money, all these ideas distract from the big picture issues. We should be dealing with Social Security’s solvency, and expand benefits for middle- and low-income households. Another concern is that all these ideas would complicate the decision-making process around claiming benefits.

Social Security’s claiming rules are complex, and most people don’t optimize their benefits under the current structure; for example, half of Americans take their benefits at the earliest possible filing age (62), despite the large boost in annual income available to those who delay.

Let’s not add more twists and turns to a claiming process that already is challenging enough.