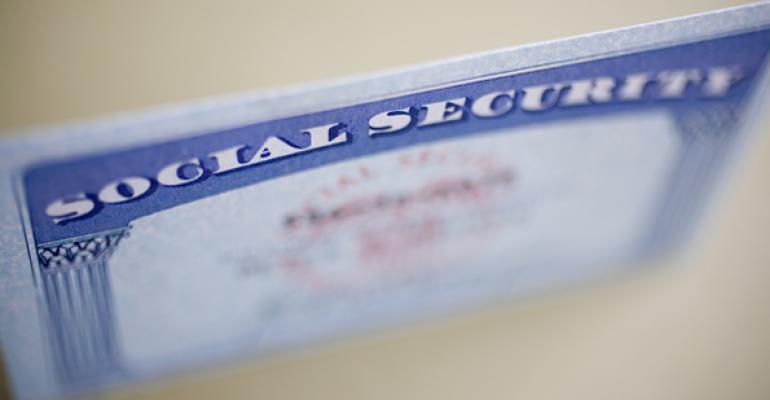 The two most significant enhancements

In our last column, we ran a simplified example of how spousal benefits work.  For many workers, spousal benefits are the most complex and least understood part of Social Security.  Most people need and want help coordinating these benefits.  We’ll use some case studies to give a more detailed analysis of the two most significant enhancements involving spousal retirement benefits.

Let’s take a more detailed look at “file and suspend” and “spousal only” (restricted application) filing strategies.  These are two of the most important ways to maximize spousal benefits in ways that most people don’t even realize.  This makes it possible to find a spousal benefit when none would otherwise be available.

It’s important to remember that this filing strategy, along with “spousal only” below, is only available once your client reaches FRA.  For anyone born between 1943 and 1954, this is age 66.  It is, in essence, a good reason to wait for Social Security rather than collecting early.

Using our example above, assume your client decides to wait until age 70.  By doing so, his personal monthly benefit would increase from $2,000 to $2,640.  (See our previous columns for an explanation of how deferred retirement credits  (DRCs) work.)  Because they’re both the same age, this essentially means that the spouse must also wait until age until age 70 to begin collecting the spousal benefit.

But when your client reaches age 66, he has the right to make a special election.  He could visit his Social Security office even though he has no intention of collecting his retirement benefits.  He would file for his benefits anyway, then immediately suspend them.

For a spousal benefit to be paid to your client’s spouse, your client has to be collecting his own personal benefit or must have filed to collect his benefit.  Thus, filing and suspending allows the spouse to become eligible for her spousal benefit.

Note that because your client hasn’t actually begun collecting his personal benefit, he’s still eligible for DRCs.  Thus, when he collects at age 70, his benefit will still be the enhanced amount of $2,640 per month.

One further note:  DRC’s don’t affect spousal benefits.  So, had your client and his spouse waited until age 70 to begin collecting the spousal benefit, the benefit would still be $1,000 per month.  It wouldn’t be $1,320.

This can essentially amount to “found money” for your client.  The plan was to wait until age 70.  But by using file and suspend, we’ve moved up the spousal benefit by four years.  And there’s essentially no downside.  At age 70, the client and spouse are still collecting the same enhanced amount they would have collected had they done nothing at age 66.  And now there’s an additional spousal benefit of $12,000 per year for four years.

There’s one more reason—often overlooked—to use file and suspend, even for a single taxpayer.  When your client suspends his benefits, he also retains the right to subsequently change his mind.  At any time prior to age 70 he can file to receive benefits back to when benefits were suspended (full retirement age, or FRA).

This option can be useful if his circumstances subsequently change.  For example, assume your client becomes terminally ill at age 69.  In that situation, he may be better off taking his accumulated $2,000 per month retirement benefit back to age 66 and retroactively terminating his suspension of benefits, which were scheduled to grow to $2,640 at age 70.  This would result in a lump sum payment of $72,000.  In exchange, he would give up the extra $640 per month he would have received at age 70.

As always, spousal benefits and survivor benefits will complicate the decision to retroactively file, but at least there’s another option.

Let’s change the facts a little.  Assume your client’s benefit is still $2,000, but your client’s spouse has her own personal benefit of $1,200, and assume both your client and his spouse decided to start collecting at 66. It would seem that because the spouse’s personal benefit is more than 50 percent, there’s simply no spousal benefit at all.  But in the right circumstances, the spousal only strategy can offer a way avoiding this.  In fact, there are times when the spouse with the higher benefit can actually be the one collecting the spousal benefit.

To understand spousal only, you need to understand what’s referred to as the “deemed filing rule.”  This rule says, in essence, that if your client files before his FRA, he’s required to file for any and all benefits he’s eligible for.  So, if your client files at 62, he would begin collecting a reduced personal benefit, and if eligible, a reduced spousal benefit.  Under these circumstances and based on the example above, there would be no spousal benefit.

If your client and his spouse are the same age, this means that either one of them can take advantage of this claiming strategy.  If the spouse claims spousal only, she would begin collecting $1,000 per month at age 66.

But, keep in mind that she’s not actually collecting her personal benefit.  So when she gets to age 70, she’ll switch to her own benefit.  At that point, it would be worth $1,584 per month.  That amount (plus cost of living increases) would be payable for the rest of her life.  As far as your client goes, he could either begin collecting $2,000 per month at age 66 or elect to file and suspend at age 66, and begin collecting $2,640 per month at age 70.

But keep in mind that only one spousal benefit can be paid at a time.  You can’t have both a husband and wife collecting a spousal benefit on each other at the same time.

Which of these four options is best?  Computer software can help you figure that one out.  In our simplified example, it probably makes more sense for the spouse (rather than your client) to claim spousal only.  This is simply because it will result in a higher net income to the family during those four years.  But either way, your client and spouse are clearly better off collecting a spousal benefit of some kind between the ages of 66 and 70.

Also note that when figuring out the best option, a lot depends on life expectancy.  If there’s reason to believe that the spouse is going to outlive your client by a significant amount of time, that would be a good reason to favor a strategy that maximizes your client’s individual benefit at $2,640.  We’ll explain why in our next column, where we will take a detailed look at how survivor benefits work in Social Security.