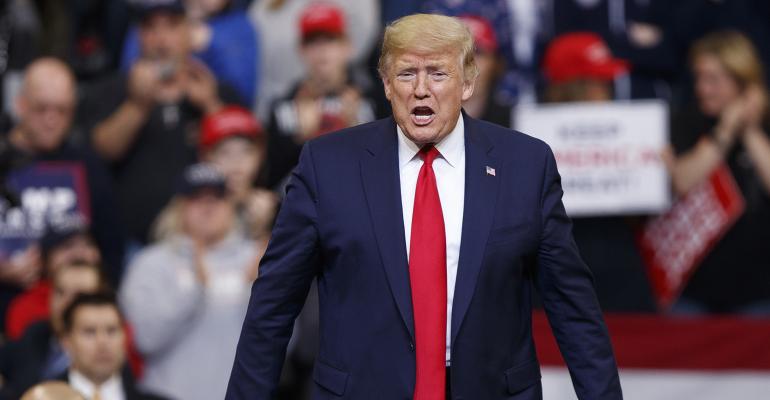 Social Security Is Safe From Trump (And Whoever Succeeds Him)

Neither party has the political will to cut benefits for retirees.

(Bloomberg Opinion) -- One of the Democrats’ favorite moments in any election cycle is when Republicans give them an opportunity to pretend that a serious plot to slash Social Security and Medicare is underway. In 2017, some remarks by Republican legislators were used to suggest that the programs for the elderly were about to be targeted.

This time it’s President Trump who handed Democrats the ammunition. He was in Davos for an economic conference when Joe Kernan of CNBC asked him, “Entitlements ever be on your plate?” His answer: “At some point they will be.” In his next few sentences, he seemed to be saying that a high rate of economic growth would make it easier to change the entitlement programs (which are called that because current law entitles large numbers of Americans to benefits under them).

Senator Chuck Schumer, the Democratic leader, responded, “Americans should hear that the president is casually talking about cutting their Social Security at a Swiss ski resort with the global financial elite.” A Democratic SuperPAC promised that more ads will hit Trump over his desire to cut Medicare and Social Security than over impeachment. Trump beat a fighting retreat, tweeting that Democrats would destroy Social Security while he would save it.

Trump’s statement in Davos is fair game: He said what he said. But that doesn’t mean that major changes to programs for the elderly in a second Trump term is a real prospect. The administration has no plans to move on this front, and would not come close to succeeding if it did.

During the 2016 campaign, Trump said, “I’m not going to cut Social Security like every other Republican and I’m not going to cut Medicare or Medicaid.” Democrats say he has already broken that pledge. Even during the campaign, he also said that he wanted to convert Medicaid into block grants to state governments — or, at least, his website did. When he took office and the Republican Congress tried to repeal Obamacare, he backed proposals that would have made major changes to Medicaid and reduced projected spending on it. His administration has proposed reining in Social Security’s disability program.

Democrats portrayed the administration’s budget proposal last year as an $845 billion cut to Medicare. That was an exaggeration. The proposal would, among other things, have shifted some parts of Medicare into other parts of the federal budget. It would also have undertaken various reforms — some of them supported by the Obama administration — to reduce spending without reducing benefit levels or increasing out-of-pocket costs for senior citizens.

Trump has from time to time hinted that he would be willing to go further. In addition to the Davos interview, he has mentioned this possibility to at least two Republican members of Congress who have spoken to me.

But this president says a lot of things from moment to moment, and not all of them amount to actual intentions. The idea that President Trump will get re-elected promising to protect Social Security and Medicare and then make big cuts to them is, to use a technical term, nuts.

Even if he is re-elected, he will almost certainly have to contend with a House controlled by Democrats. They would not cooperate with him on such cuts, and would in fact oppose them as a way of maximizing their gains in the 2022 elections. Senate Democrats would also almost certainly keep enough seats to retain the power to filibuster; they might even win a majority. And since presidents usually lose ground in midterm elections, we can’t expect Trump’s legislative influence to increase thereafter.

For their part, congressional Republicans show very little appetite for a battle over entitlements. They don’t want to relive their defeat in the legislative fight over Obamacare repeal. Their voters seem unconcerned about high deficits as long as a Republican is in the White House. They themselves feel no urgency to bring deficits down with interest rates as low as they are. And it would be especially difficult to spur them to action after a campaign in which the president was silent, or defensive, on the issue.

Changes to Medicare and Social Security would be less likely to happen under a re-elected Trump than under a newly elected Joe Biden, Michael Bloomberg, Pete Buttigieg, or Amy Klobuchar — and even under one of them, such legislation would be a longshot. (Bloomberg is founder and majority owner of Bloomberg LP, the parent company of Bloomberg News.)

Expect commercials later this year to make the case that seniors should be very afraid that Trump is coming for their benefits. But when it comes to Social Security and Medicare, what should really worry us is that Washington, D.C., won’t do anything to protect their long-term viability.

To contact the author of this story:
Ramesh Ponnuru at [email protected]

To contact the editor responsible for this story:
Sarah Green Carmichael at [email protected]