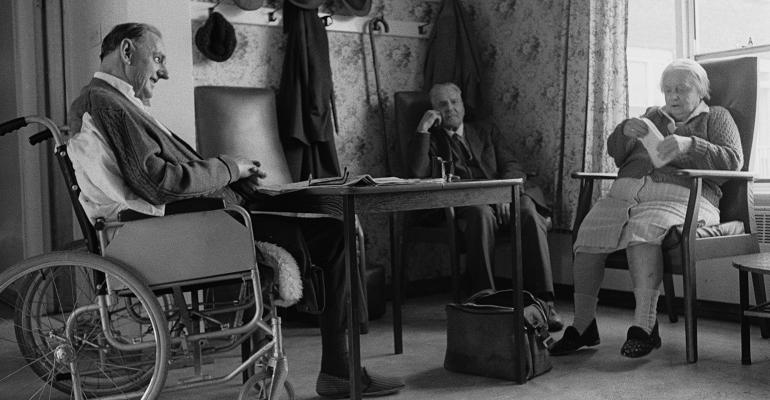 The Sobering Realities of Paying for Long-Term Care

Higher incidence of nursing home need – and higher out-of-pocket costs – are concentrated among more affluent households, and affect women more than men, a Rand report has found. Here are the risks of needing institutional care

Advisors face big challenges when it comes to insuring clients against the risk of nursing home expense. It’s not a popular topic of discussion—and the options for funding expensive institutional long-term care are not attractive.

Only the most affluent households can afford to pay out of pocket, and only 12 percent of people in their late 50s and early 60s have opted to buy commercial long-term care insurance (LTCI), according to Rand Corporation research. Meanwhile, Medicaid covers 62 percent of long-term care in the United States, according to the Kaiser Family Foundation—and using the program comes with its own issues for household balance sheets.

How substantial is the risk that your client will need long-term care in a nursing home setting? You’ll see numbers all over the map; federal government data, for example, shows that a 65-year-old person runs a 35 percent risk of entering a nursing facility sometime in their lifetime. Other reports have suggested the risk is higher or lower, depending on the methodology used.

For financial planners, it’s important to understand the risks associated with the cost of institutional care. A new Rand report tries to assess the risk by tracking a group of people as they moved through the years of possible nursing home use. The researchers did this using data from the federally funded Health and Retirement Study, a respected longitudinal research project that follows older individuals for up to 18 years. They found that the risk of staying in a nursing home is higher than previously reported.

Rand concludes that 56 percent of people ages 57 to 61 will spend at least one night in a nursing home during their lifetimes. People in this age group run a 10 percent risk of spending three years or more in a nursing home and a five percent chance of spending more than four years in one.

Those longer stays pose major financial risks. The median annual cost of a private nursing home room this year is $97,452, according to Genworth’s annual cost-of-care survey, and it is far higher in some states ($162,060 in Connecticut, for example).

Higher incidence of nursing home need—and higher out-of-pocket costs—are concentrated among more affluent households, says Michael Hurd, lead author of the study and a senior principal researcher at Rand. “We know that well-to-do people are more healthy and they live longer,” he says. “That means they are more likely to live to an age where nursing home use is heavy, and more likely to pay for it themselves, since few have long-term care insurance and the well-to-do are less likely to qualify for Medicaid.”

And the researchers conclude that the risks for women are much higher than for men. Sixty-four percent of women will use some level of nursing home services, compared with 51 percent for men; but women’s mean usage is double—301 nights for women compared with 141 nights for men.

“Part of this is the greater longevity women experience, but another factor is that women, on average, marry men who are three years older,” Hurd explains. “So the odds of the husband dying before the wife is elevated. Most men die married and most women die single.That means men are more likely to have someone available who can care for them.”

In a similar vein, Rand found that risk of a long stay is lower for people with children; for example, those with four or more children will spend 38 percent less on care than people with no children. “The lifetime risk of needing care doesn’t vary by whether you have children, but the amount of time spent in a nursing home can vary quite a bit,” Hurd says. “It may be that following a rehabilitation stay, people with children are able to go back to their homes and communities more quickly.”

Indeed, Rand’s findings confirm other data on the importance of caregiving provided by family members, especially daughters. Rand found that the maximum number of nursing home nights used was 33 percent higher for those without children, compared with those who had four or more children. The length of stay was even lower for patients who have daughters.

But that trend may not persist in the future, because average family size in the U.S. is shrinking. “People in their mid 60s or late 50s today have many fewer children, on average, than those who are at an advanced age,” he says.

What’s more, we’re headed for a severe shortage of caregiving—paid and unpaid—according to Paul Osterman, a professor of human resources and management at the Massachusetts Institute of Technology’s Sloan School of Management. Osterman is the author of a new book, "Who Will Care for Us: Long-Term Care and the Long-Term Workforce" (Russell Sage Foundation, 2017), which examines trends in the labor force market for caregivers.

Osterman concludes that in 2030 there will be a national shortage of 151,000 paid direct-care workers and 3.8 million unpaid family caregivers. By 2040, the shortfall will be much larger: 355,000 paid workers, and the family and friends shortfall will be a whopping 11 million.

How should planners approach these risks with their clients? Not by urging them to buy LTCI, Hurd says. “For most people, these policies are not well designed—they have maximum numbers of years that will be covered, and maximum daily payment rates—so it’s not really insurance because it doesn’t insure against the long-tail event of a very long stay—you’d be on your own.”

Instead, Hurd says, the data point to the need to have a serious conversation with your clients about their comfort level with Medicaid. This will depend on their attitudes about using the public insurance program, and whether they are married or single—since Medicaid coverage is triggered only after spending down assets to poverty levels. “If your client is a completely rational person, he or she doesn’t care if he is on Medicaid or not—it’s public insurance and it is there for them, and they’ll use it if necessary.

“A single person who isn’t concerned about making a large bequest might be fine spending down what he or she has and letting Medicaid pick up the rest; but others may not be comfortable with it.”