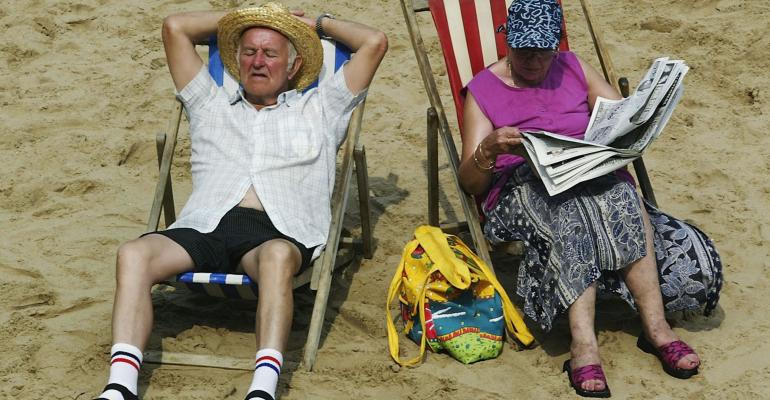 (Bloomberg) --The world’s working-age population is shrinking faster than expected, leaving fewer people to support a growing number of seniors, according to the Bloomberg Sunset Index.

Conventional measures of old-age dependency calculate the ratio of people ages 65 and older with those of working age: 15 to 64. But many people stop working well before 65: Men in 66 percent of the 178 countries Bloomberg evaluated and women in 78 percent can begin receiving retirement benefits earlier.

So the Bloomberg index calculates dependency based on each country’s statutory pensionable age, revealing substantial differences in some places with 2016 estimates from organizations including the World Bank and United Nations. Nigeria, with a statutory pensionable age of 50, has only 4.8 workers supporting each senior, compared with 19.4 as indicated by conventional measures. Russia has 2.4 instead of 5.1, and Colombia has 4.5 instead of 9.4.

“The demographics cannot be ignored, but there are solutions,” said Suzanne Kunkel, director of the Scripps Gerontology Center at Miami University in Oxford, Ohio. “Those solutions need to be cultural, political, economic. There is no magic answer. The reality is China will deal with it differently than Italy.”

Asia could be facing the toughest choices in allocating resources. The Asia Pacific Risk Center estimates the region’s elderly population will rise 71 percent by 2030, compared with 55 percent in North America and 31 percent in Europe.

The retirement age in China -- with almost 22 percent of the world’s 65-plus population -- is 60 for men and 55 for women. The Bloomberg Sunset Index shows 3.5 workers supporting each senior there; conventional calculations indicate 7.3.

Seniors in France, where the retirement age is 61.6, and Singapore, at 55, are the least supported, with a ratio of about two workers to each retiree, the index shows. In the U.S., the ratio is 4.4 to one.

Americans can start receiving Social Security at 62, with a sliding scale for full retirement benefits from 65 to 67, depending on the year of birth. In June, the Social Security Administration estimated the program’s trust fund will run out of money in 2034, though the timeline could be extended by raising the retirement age even more.

“There are other-than-alarmist views about population aging,” said David Ekerdt, director of the Gerontology Center at the University of Kansas. “Advanced economies face rather different challenges depending on the social provisions they have promised and the declines in fertility that have occurred in these nations.”

The U.S., for example, has “very high health-care costs for all citizens,” he said. “I would also say, politically, that it’s a large leap to assume that social spending, if reduced for one group, would be applied to another group.”

The National Social Security Fund in Kenya, the country’s largest pension fund, is turning to private equity and seeking investments abroad to boost returns. The Bloomberg index shows 11.7 workers supporting each senior there, compared with 19.4 by conventional calculations.

In Japan, where many people work beyond the statutory pensionable age of 65, payments from the government-run pension system account for more than 10 percent of gross domestic product. In December, parliament approved a bill allowing for smaller payments if consumer prices and wages decline. Taking it a step further, Japan replaced silver sake cups it gives new centenarians with cheaper silver-plated ones.