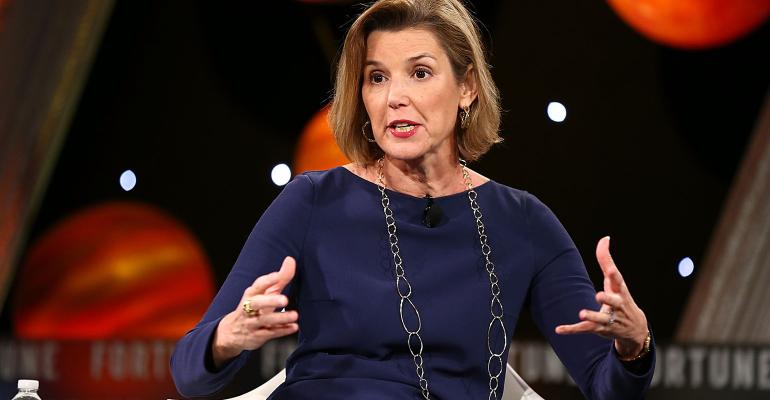 Many women see their highest pay at an earlier age than men, take more career breaks, and live longer. Krawcheck just got $34 million to work on that.

(Bloomberg) --Women’s careers are different from men’s, and their retirement planning should be, too, is Sallie Krawcheck's pitch. Now Krawcheck, one of the top women on Wall Street, has closed a hefty new round of funding for her startup robo-adviser, Ellevest.

Founded just over a year ago, Ellevest is an online investing platform that offers exchange-traded funds to help women save for retirement. That doesn’t mean the fund’s ETFs are somehow better suited to women, but that Ellevest tailors their portfolios to women’s needs.

For example, it uses salary curves geared to women, who usually see their highest pay at an earlier age than men and take more career breaks, which slow wage growth. With longer life spans, women have different risk profiles, too. Ellevest factors all this in so the portfolios it generates better estimate lifetime salaries and how much money its clients will need in retirement. To help them reach their goals, the firm aims for 90 percent of annual income in savings before retirement, rather than the more typical 50 to 70 percent.

“Forecasting those things out is really important for retirement,” Krawcheck said in an interview.

The new, $34 million round of funding was led​ ​by​ ​Rethink​ ​Impact and included Salesforce​ ​Ventures and​ ​CreditEase​ ​Fintech​ ​Investment​ ​Fund. Venus Williams and Mohamed A. El-Erian have also backed the startup. El-Erian, chief economic adviser of Pimco parent Allianz, is a Bloomberg View columnist.

Krawcheck, chief executive officer and co-founder of Ellevest, was the chief financial officer and head of global wealth management at Citigroup before heading up wealth management for Bank of America. Even with her high-powered resume, it isn’t clear how scalable a digital money manager for women is. Other female-focused robo-advisers have struggled, some unsuccessfully. SheCapital was around for only about a year—though Ellevest itself may have played a part in its demise, having launched at around the same time.

Krawcheck said she is confident she can keep up the pace but acknowleged that raising the money wasn’t easy. She said she could add more features consumers are asking for, like credit cards and lending, or partner with companies to give advice or create portfolios for their female employees.

Ellevest charges higher fees than some of the other robos, at 0.5 percent of invested assets, which can help it become profitable with less money under management—but can also deter price-conscious customers who look to ETFs for low-cost investing. Ellevest has grown to just over $50 million in assets under management since launching in November.

For now, the new capital will go toward adding planners to the platform, something Karwcheck says clients have been asking for. Adding people to the digital mix has been a trend this year among robo-advisers. Betterment LLC. and Charles Schwab both launched hybrid versions in recent months, pairing the technology behind the robo-platform with living, breathing beings.

Krawcheck said Ellevest will keep working with the client “to create exactly what she's looking for.”
Attatched Media