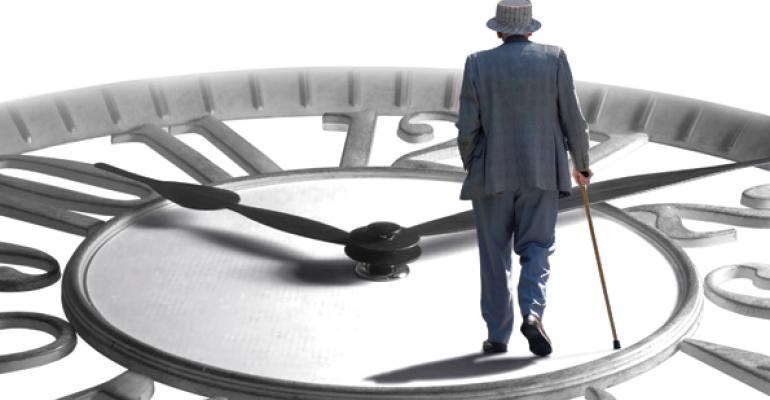 Retirement Spending Is Not A Straight Line

The standard method of projecting a client’s spending pattern may have them saving too much.

Is it time to retire the old rule of thumb for projecting your clients’ spending needs in retirement?

The standard formula starts with replacing a certain amount of pre-retirement income - generally 75 percent to 80 percent - and adjusting that for inflation annually. Yet a growing body of financial planning research questions that approach by demonstrating that retirement expenses rarely move in a straight, inflation-adjusted line - and often declines sharply at advanced ages. The implication: clients may not need to save as much for retirement as traditional planning theory holds.

Pfau, a professor at The American College in Bryn Mawr, Pennsylvania, thinks the jury is still out on the issue. “Some of the studies worry me, because they are based on surveys of the non-institutionalized population,” he says. “Any nursing home or assisted living can cause you to underestimate the spending. But if you’re insured for a long-term care need, you probably don’t need as much money for retirement as we’ve been saying.”

“Planners should think about each of their clients individually,” he adds. “If he looks like someone who will have declining discretionary spending with age, and he’s properly insured, you can build that into the budget.”

Even healthcare spending can vary widely, depending on your client’s longevity, health conditions, and even location. I illustrated this in my April column, with help from Boston-based Healthview Services, which provided projections showing that out-of-pocket spending in retirement can vary by hundreds of thousands of dollars.

Stephen Utkus, director of Vanguard’s Center for Retirement Research, thinks the evidence to date points toward a need for much more research on what he calls “the second half of retirement.”

“The standard model in the actuarial world is that if your income was $100 before you retired, and you want to live on $60 or $80, then every year in retirement your basic risk was to hedge some kind of cost-of-living adjustment. You can do that using Social Security, but not a corporate pension. So, you’d use some of your savings, and hope that you have investments that beat inflation over time.”

“As seniors get to an advanced age and become more frail, people make decisions to either move in with their kids, where the cost of living falls dramatically because they are sharing costs. On the other end of the spectrum, you have people who need nursing care and pay $120,000 a year. So, we need to think more about the breadth of outcomes.”

Utkus, who recently wrote a blog post on his own experience with this, helping his mother, who is in her mid-eighties, with her transition to a retirement community, also thinks the uncertainty of later-life spending needs goes a long way to explaining the annuity puzzle - the fact that so few retirees purchase income annuities to protect against longevity risk, despite arguments by many retirement researchers that they can be a very effective hedge against longevity risk.

“When you talk to households and ask why they don’t annuitize more of their wealth, they say they are worried about locking up their money. But at heart of that is a fear that they may need to draw down those assets quickly late in life for catastrophic health need. So, it’s a very practical reason that people are reluctant to annuitize.”

The emerging thinking on spending also echoes recent research questioning the standard four percent drawdown rule of thumb. Recent Morningstar research concludes that an initial four percent withdrawal rate -- in today’s low interest rate environment -- leads to a 50 percent probability of success over a 30-year period. The authors concluded that a 2.8 percent target is much safer.