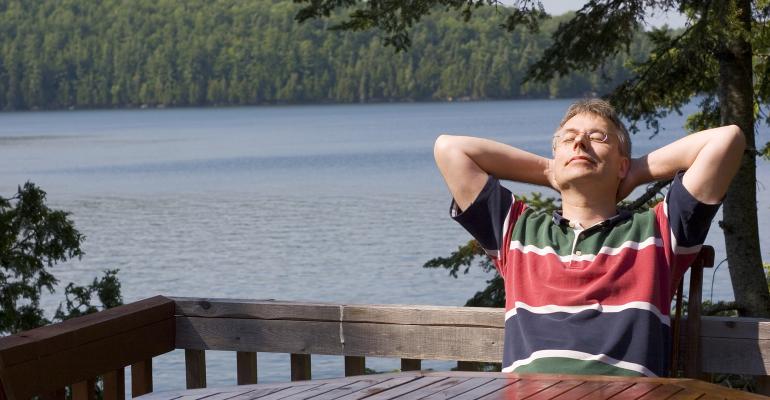 A very different outlook on saving for retirement.

It’s not hard to find critics of FIRE—the acronym for the financial independence, retire early movement. The central FIRE idea embraced by millennials violates retirement-planning orthodoxy—namely, work for 45 years or so, save 10 to 15 percent of income and retire happily ever after.

Retirement-planning critics of FIRE note that it’s tough enough to make savings last over a 30-year retirement, let alone 50 or more. Or, they dismiss FIRE as an irrelevant idea for all but the highest-income households, who can afford this kind of extreme saving.

I share the worry about longevity risk—very few households can pull off a 50-year retirement without creating high financial risk at older ages. But many FIRE adherents aren’t really retired at 40—they have simply ditched the corporate grindstone for alternate careers, often with an entrepreneurial flavor, like investing in real estate or the financial markets.

And it’s not like things are going so great for younger non-FIRE households. The Society of Actuaries reported recently that about one in four millennials and Gen Xers are financially fragile, meaning they are vulnerable to a financial crisis and have a negative outlook on their personal finances.

What’s more, there’s plenty to like about the FIRE movement’s focus on frugality and a simplified lifestyle, and getting past the financial services industry mantra that we must all save more, more and still more without looking at the spending side of the equation. And a mass movement of young people thinking ahead about their financial future certainly is good news.

“Anything that gets people to think about how to save more and to reach whatever goal they have in mind is great by me,” says Jill Schlesinger, who hosts the weekly “Jill on Money” nationally syndicated radio show and just published her first book, The Dumb Things Smart People Do with their Money: Thirteen Ways to Right Your Financial Wrongs (Ballantine Books). “Most people in the FIRE movement are just saying they want options—they want to get rid of their debt; they want a financially secure life and to do something they feel really good about.”

How are planners responding to young clients intrigued by FIRE, or pursuing it? It’s mostly a do-it-yourself movement—after all, why pay fees to an advisor that could be socked away for that 50-year retirement? But I reached out to members of the XY Planning Network, an organization of fee-only advisors focused on serving Gen X and Gen Y clients, to get their take.

Many say they are hearing a good deal more about FIRE these days from clients. The inquiries range from the frivolous to the very serious, says Christine Centeno, founder of Simplicity Wealth Management in Glen Allen, Virginia. On the not-so-serious side, she heard recently from a 25-year-old potential client who wanted to retire within five years. “No side gig or part-time work,” Centeno says. “She had no substantial savings but wanted to set up a meeting to talk about how she could retire in five years. I was actually blown away at the sheer ignorance.”

On the serious side, Centeno heard from a couple that studied FIRE carefully and used the YNAB software tool for budgeting, “They had funded Roth IRAs early, and they were high earners, making $300,000 per year combined in their early thirties and living off of approximately $80,000, so they could save a ton—no kids, and no plans for kids. They wanted to work for another 10-15 years and then relocate to Oregon where cost of living was more reasonable than San Francisco where they currently lived.”

Some planners are noticing an impact from the rapid proliferation of FIRE-related financial content online—there is a large, growing community of bloggers and social media posters, and that provokes positive conversations with clients, says Ian Bloom, a CFP who owns his own firm in Raleigh, North Carolina, called Open World Financial Life Planning.

“The conversations tend to center around difficult financial concepts that my clients read about online and want more clarification on,” he says. Clients will notice that Bloom shares an opinion on a given topic, and they want to explore further with him. “I don't really mind fielding these questions,” he says. “Any chance to have meaningful discourse with a client and educate them more specifically is a good thing.”

Bloom thinks the huge amount of FIRE content online generally provides an important service to the average consumer. “Most of the financial content out there has largely been produced by large financial institutions as arguments for products, and it has been difficult to consume.” But he does worry about what he calls the “this is the way you should do it” approach of some FIRE bloggers. “Financial planning is a complex puzzle that balances hundreds of different variables. This means that any individual's situation may have a factor in it that invalidates the blogger's approach. If that person follows the advice without seeking individualized help, they may end up in a financial situation that is worse off than it would have been if they sought the individualized help.”

Some planners frame FIRE as aspirational, rather than a literal plan, when they discuss it with clients. “FIRE is a great goal to have, but it's more extreme than it needs to be,” says Bill Nelson, founder of Pacesetter Planning in Natick, Massachusetts. “Most people can get 80 percent of the benefits of FIRE with 20 percent of the effort.”

Most of Nelson’s clients who have retired early wind up doing some work after leaving their full-time jobs, he adds. “Even a small amount of employment income can make a huge difference—if they had planned on working part time after their "independence date," they could have left their ‘real job’ five or even 10 years earlier.”

Traditional rules of thumb on things like pre-retirement salary replacement just won’t work with FIRE adherents, says Karsten Jeske, one of the rock stars in the online FIRE world, who goes by the online moniker Big ERN. He holds a Ph.D. in economics, is a chartered financial analyst and posts data-driven analysis of the phenomenon on his website. Jeske retired last year from an institutional money management job at a major bank in San Francisco and moved with his wife and young daughter to a small town in rural Washington state, where the cost of living is much lower. Jeske is not fully retired—he spends a couple hours a week trading options and says he is “exploring some other opportunities” in that market.

“People in the FIRE community roll their eyes at the idea you have to replace a certain percentage of salary in retirement,” he says. “We see it the other way around—what will I need to be happy? A lot of planners are still living 10, 20 or 30 years behind reality when they apply these old methods.”

Jeske has published a series of posts analyzing safe withdrawal rates for early retirement. He readily acknowledges that traditional thinking (e.g., the landmark William Bengen or Trinity University research on drawdown rates)—cannot be applied to FIRE retirement plans. “You really need to plan two retirement horizons,” he told me. “The first 30 years, the focus is capital preservation. During the second 30 years, it’s OK to deplete your savings.”

What About Social Security?

Aside from saving and drawdown, the other challenge for FIRE planning is sharply lower Social Security benefits.

The calculation of Social Security retirement benefits starts with a formula called average indexed monthly earnings (AIME), which averages a worker's highest-earning wage-indexed 35 years of work. If a worker has less than 35 years of work, AIME still uses 35 to calculate but includes zeros in the calculation.

FIRE adherents like to point to the relative efficiency of staying inside Social Security’s first bend point—that is, the portion of primary insurance amount (PIA) that will be returned to the beneficiary.

Early retirees with only half the work history, or even just the 10-year minimum, still get a meaningful benefit, especially if they were highly compensated,” notes Jeske. “It likely won't be enough to completely cover our expenses in retirement, but it will be a nice bonus!”

How might that play out? I asked SocialSecuritySolutions.com, one of the leading firms providing benefit optimization software, to compare a traditional 45-year working career with two FIRE scenarios. In one, a worker retires completely after 20 years of work; in the second, the same worker “retires” after 20 years but continues to receive some income from entrepreneurial or gig work. In all cases, the worker begins with an annual wage of $60,000 that rises 2 percent in real terms annually.

Her benefit at full retirement age (67) would be $2,628 after 45 years of work. Quitting full stop after 20 years would slash her benefit by 39 percent, and doing the gig work scenario yields a benefit that is 27 percent lower.

“The difference in Social Security benefits over time, cumulative benefits, can be significant,” says William Meyer, co-founder of SocialSecuritySolutions.com. “All FIRE followers should run their numbers to see how filling in “gap years” used for benefit calculation can find them more money.