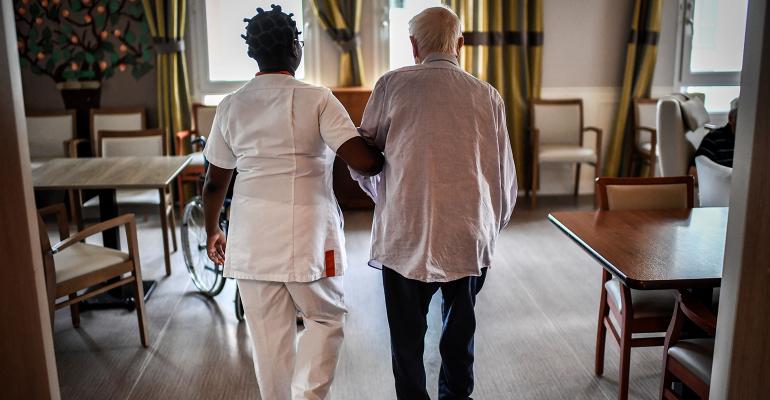 A labor shortage in the caregiving market could have widespread implications.

As a financial advisor, you’re always on the lookout for myriad risks to clients’ retirement plans—everything from the market, job loss and uncertain longevity to inflation and interest rates.

Now add this to your list: a labor shortage in the caregiving market.

Growing evidence points to a severe shortage of labor to provide caregiving for our growing older population. Demography is a significant part of the problem—the aging of the nation is accelerating demand. But much of the problem stems from bad policy. One of those is the current federal crackdown on immigration, which is choking off the supply of caregiving labor. Another is our failure to enact policies that ensure caregivers are paid and trained adequately—in other words, treating this work as an important, honorable occupation.

“The shortfall of home care workers can be attributed to its low wages, poor benefits, absent advancement possibilities and unpredictable work hours along with extremely high worker turnover” says Stephen Golant, a gerontologist who wrote about the problem in a recent study.

“But it is being exacerbated by this presidential administration’s immigration policies, which could not have come at a worse time,” he adds. “These favor better-educated and more highly skilled immigrants. However, our home care workforce is top-heavy with low-skilled immigrant labor.”

The looming labor shortage has implications for the cost of care, should your clients require it. But it also means more clients will be pressed into caregiving service during their working years, curtailing careers and earnings. That will have implications for their ability to earn Social Security or defined benefit pension credits, or to save for retirement.

Scope of the problem

One recent forecast on the labor shortage comes from human resources expert Paul Osterman. A professor of human resources and management at the Massachusetts Institute of Technology’s Sloan School of Management, Osterman is the author of Who Will Care for Us: Long-Term Care and the Long-Term Workforce (Russell Sage Foundation, 2017).

Osterman examines the projected rising demand for care, then matches up the demand side with trends in the labor force for paid certified nursing assistants and home care workers, including the availability of unpaid family and friends—the most common source of care for many people.

He concludes that in 2030 there will be a national shortage of 151,000 paid direct care workers and 3.8 million unpaid family caregivers. By 2040, the shortfall will be much larger: 355,000 paid workers, while the family and friends shortfall will be a shocking 11 million.

A 2017 story in The Washington Post (by my colleague Judith Graham of Kaiser Health News) examined the impact of labor shortages in three states: Wisconsin, New York and Illinois. In Wisconsin, a survey of long-term-care facilities and agencies serving seniors and people with disabilities turned up these disturbing results:

Unpaid family caregivers historically have been a key source of this labor. But Golant, a professor emeritus at the University of Florida and the author of Aging in the Right Place, notes that historically low fertility rates translate into fewer adult children available to help; so do higher divorce rates, which mean less stable family support networks.

More than 25% of home care workers are foreign-born or immigrants, according to the Paraprofessional Healthcare Institute.

But the Trump administration’s crackdown on immigration has sharply reduced the number of legal immigrants entering the U.S. That, coupled with more restrictive family unification, more aggressive enforcement and other measures, has stymied the labor market.

In his book, Osterman forecasts that the impact of a shrinking immigrant labor pool will be uneven, due to the huge variation in immigration patterns among the states. The highest percentages of home care aides who are immigrants are found in New York (64%), New Jersey (47%), California (46%), Florida (38%) and Texas (22%). By contrast, just 8% of the home care aide workforce in Ohio are immigrants.

The labor shortage already is reflected in the latest annual Genworth Cost of Care survey, released in October.

Genworth found that the fastest-rising long-term-care costs are no longer for skilled nursing care, but home-based care. The cost of homemaker services rose 7.1% in the last 12 months; the cost of a home health aide increased 4.5%. Nursing home costs were also up 1.8%, the survey found.

Genworth cited the tight labor market, along with new regulations and higher minimum wages in some states, as key factors. Another factor is recent changes in post-acute-care Medicare reimbursements, which is spurring hospitals to discharge patients more quickly and with greater care needs.

The trends point toward higher caregiving costs for your clients, whether they fund care out of pocket or through premiums on long-term-care insurance policies.

There’s also greater risk that clients will face the need to interrupt their own careers to provide care for loved ones when viable professional help is not available or affordable. This usually impacts women, who already face higher hurdles achieving retirement security.

Concerns about the financial impact of caregiving on retirement security are finding their way into Social Security reform plans. In September, Democratic candidate Elizabeth Warren called for a new credit in the benefit formula for family caregivers as part of a broad plan to reform and expand Social Security.

Warren’s plan would give credit toward Social Security’s benefit calculation to people who provide 80 hours a month of unpaid care to a child under the age of 6, a dependent with a disability or an elder. For every month of caregiving that meets these requirements, the caregiver would be credited with a month of income equal to the monthly average of that year’s median annual wage.

Since so few households own long-term-care insurance, Golant thinks the caregiving shortage will have its largest impact on middle- and higher-income households that are not poor enough to qualify for Medicaid but lack the financial resources to meet caregiving needs out of pocket. “They will face major new expenses, and it will crimp their ability to save,” he says.

He adds that another impact of the caregiver shortage will be an increase in the number of older people who will be forced to move in with their adult children. “These children should expect to experience not just greater demands on their time and energy, but also new expense burdens and lifestyle disruptions,” he says.

That certainly will affect their employment situations and retirement decisions. But the impact will be broader, he notes. “Caregiving is demanding of time and energy, and it is linked with all matter of health problems—higher rates of chronic disease, musculoskeletal disorders, depression, stress and sleep problems.”

“Those are likely to worsen as the stresses of the caregiving burden increases.”