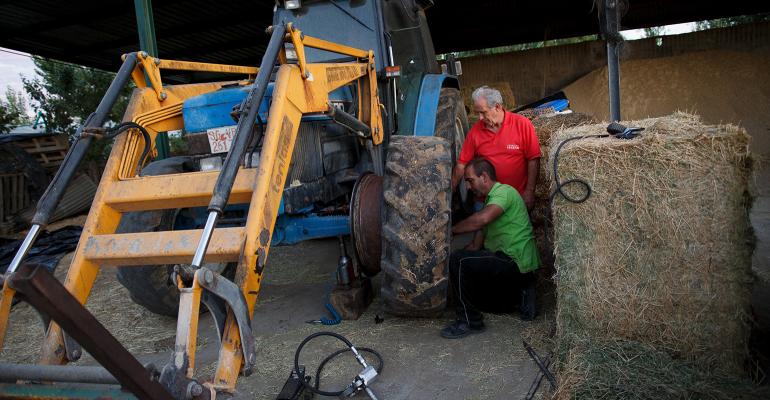 Working during retirement, by need or choice, throws many traditional retirement plans off track. Here&rsquo;s how to adjust. &nbsp;

A long time ago in a galaxy far, far away, your clients relied on the three-legged stool to help them navigate the financial universe in retirement: A pension, Social Security and their own investments.

But in our galaxy, traditional pensions are disappearing, longevity is rising and investments, as well as savings, are inadequate. So the stool has a new leg: Work.

Working past the traditional retirement age isn't a new trend, but it’s on it’s way to becoming commonplace. The latest labor force data shows just how much older Americans are relying on the labor market to bolster their retirement security.

The unemployment rate for workers over age 55 in December was 3.2 percent, the lowest since the economic recovery started in 2010 - and far below the national jobless rate of 5 percent. Moreover, the labor participation rate - which includes people looking for work and those who have jobs - was 39.8 percent, close to its peak of 40 percent in 2012, according to analysis of government data by Teresa Ghilarducci, an economist at the New School for Social Research in New York. In 1995, she reports, only about 30 percent of workers over 55 participated in the labor force.

The trend will continue, Ghilarducci says.  “The numbers can only continue to rise from here.”

Affluent, educated boomers are among the most likely suspects to continue working - in other words, your clients. That creates some new challenges for advisers crafting retirement plans - but it also new ways to prove your value. Clients will need help thinking through the changes in their plan assumptions; everything from restructuring retirement income models, to account withdrawal sequences and tax implications to the strategies they’ll use to claim Social Security and Medicare.

Almost half are looking to work in a new field (44 percent). While 57 percent said they would like a traditional employment position, 21 percent would like to be independent contractors and 19 percent hope to become entrepreneurs.

Survey respondents say they are looking for new challenges and to learn new skills, but people also realize they may have time on their hands - quite a bit of it. “People realize they are living longer and these decisions are tied to that,” says Jean C. Setzfand, senior vice president of programs at AARP.

Financial stress is another driver of the trend. A recent TCRS survey of retirees found that the top financial priorities are covering basic living expenses (42 percent) and paying for healthcare (37 percent), and continuing to save for retirement (20 percent). Debt burdens are another key factor: 25 percent are paying off credit card debt, and 21 percent are paying off their mortgages.

Vanguard research shows that the decline of traditional pensions has created the incentives to work longer. “When you have a traditional pension, there is a natural incentive to retire at a traditional age,” says Steve Utkus, director of the Vanguard Center for Retirement Research. “Many pension plans cap tenure at 25 years - so at a certain age threshold, you aren’t earning any further pension credits. We’re finding that, on average, a defined contribution account holder works two years longer - accruing additional savings is an incentive to keep working.”

A Vanguard study of affluent retired households found that 12 percent of their income comes from work, on average - but that retirees more reliant on retirement investment accounts to fund their retirement received 20 percent of income from work.

Working longer occurs most often in higher-income households, says Christian Weller, professor of public policy at the McCormack Graduate School of Policy and Global Studies at the University of Massachusetts-Boston and author of Retirement on the Rocks, Why Americans Can’t Get Ahead and How New Savings Policies Can Help (Palgrave Macmillan). “People at the top of the wealth scale tend to work longer, and they are more likely to move into self-employment or start a business.”

It helps that more employers are open to the desire among workers for flexible work arrangements, Ghilarducci notes. “There is a seemingly unending interest among American employers to hire people on a more contingent basis. The cost to employ older workers is much lower - they may already have income from Social Security or a pension, so they can pay them less - and Medicare covers their health insurance. Effectively, it’s a big subsidy.”

From a planning perspective, the trickiest element may be the uncertainty between a client's wish (or need) to work longer, and their ability. Surveys have repeatedly found that most workers retire sooner than they expect. So approach modeling retirement plans on a more advanced age with caution. “Don’t look at retirement as a single age or date - consider it across a spectrum of probability,” says Collinson. “Will there be stopping and starting? Income gaps that need to be filled while your client is figuring things out?”

Utkus thinks planning for these transitional periods between career work and retirement will be critical. “If I’m sitting with a client who says she is going to start working part time or downshift to a lower wage job or start a business, planners need to think about how long that period will last. A lot of people in the wealth management business are still focused on portfolio allocations and they do cash flow planning as a courtesy. But transitional work will affect what you need from the portfolio, so it reinforces the notion that a more holistic model of cash flow planning is emerging.”

If your client is working longer, it’s important to revisit the assumptions you both have made about Social Security. That includes the date you have planned to take the benefit and the payout you expect. If work makes it possible to delay filing, that will boost benefits substantially via the delayed filing credit, adding roughly eight percent to the benefit for every year the claim is delayed, up to the age of 70.

Working longer can also boost Social Security benefits if your client has experienced bouts of joblessness at some point. Social Security calculates the Primary Insurance Amount (PIA) by averaging together a beneficiary’s 35 highest-earning years. If your client has, for instance, only 30 years of work, the Social Security Administration still calculates the best 35 years - but five of those years will be zeros, reducing the average wage used to calculate the benefit. Going back to work in any capacity can replace those zeros with earnings, bringing average wages up a bit and lifting benefit amounts down the road.

For clients working in their 60s, there’s very little sense in filing early if wages are sufficient to meet living expenses. Earlier filers who have income from work in 2016 of more than $15,720 will see $1 deducted from benefit payments for every $2 earned over that amount (the withheld benefits are added back into benefits at full retirement age). After full retirement age, there is no limit on income.

It’s also important to keep an eye on taxation of Social Security. Benefits are taxed using a “combined income” formula that is determined by adding together adjusted gross income, tax-exempt income and half of the Social Security benefit. If that total exceeds $25,000 for individuals ($32,000 for married couples), 50 percent of the excess must be included in income for tax purposes; if it’s over $34,000 ($44,000 for couples) 85 percent of the excess is included in taxable income.

Medicare eligibility begins at 65, and if your client already receives Social Security benefits they are automatically signed up for the program. If not, it’s important to sign up in the three months before a 65th birthday or in the three months after. Failing to do so can lead to expensive premium penalties down the road.

Monthly Part B premiums jump 10 percent for each full 12-month period that an enrollee could have had coverage but didn’t sign up - and that’s a lifetime increase. The exception is a client employed by a company with more than 20 workers that offers health insurance. In that situation, your client can file for Medicare and stay on the employer's plan. In all other situations the client should enroll for Medicare at age 65.

Enrollment aside, working seniors also may find themselves paying Medicare’s high-income premium surcharges, applied to Part B and Part D. Individuals with more than $85,000 in annual income (and joint filers with total annual income of more than $170,000) will have high income premiums that start at $170.50 per month, compared with $104.90 for the basic premium - and they head far north from there, as high as $389.80.

That strengthens the case for diversifying holdings between tax-deferred and post-tax accounts prior to retirement with a conversion of tax-deferred holdings into Roth IRAs. Getting some of that tax-deferred money into a Roth can help get around RMDs from tax-deferred accounts. Keep in mind that RMDs are not required from the 401(k) of a current employer. If a client plans to stay on the job past age 70, this is a good reason not to rollover funds.

Other options for minimizing RMDs are few. One that has resurfaced is the qualified charitable distribution (QCD), which permits cash donations up to $100,000 to IRS-approved public charities direct from an IRA. The gifts can be counted toward an RMD and are excluded from taxable income. Congress recently reinstated the QCD and made it permanent.

The new twists coming to the world of retirement planning will create some complex challenges, but they’ll also create new reasons for clients to rely on the help of advisers.

May the force be with you.