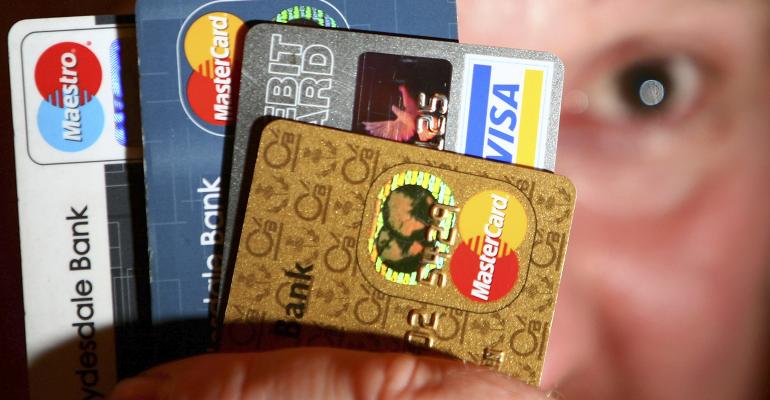 Pulling Clients Out of the Debt Hole

Your clients can earn big, guaranteed returns by paying off their credit cards.

According to Argus Information and Advisory Services, 44 percent of American credit card holders carry an outstanding balance on their credit card accounts. CreditCards.com says the average balance per household is about $9,600, and the average interest rate on those balances is 16 percent.

And it’s not just the financially struggling who are paying this interest. The website NerdWallet says that in 2016 Americans who earned more than $157,479 annually paid on average $2,515 in credit card interest that year.

Clients who carry high-interest debt will likely have a lower credit score, which means they could be paying more in interest costs on other loans, as well as higher premiums for auto and homeowner's insurance.

Here are some steps clients can take to cut their interest costs now and pay the debt off sooner rather than later.

The first step to getting clients out of the debt hole is to have them stop digging. They should put the cards in a place that’s difficult to access, such as a box in the closet. In dire situations, they may want to cut up the cards into little, unusable pieces.

They should also erase their information from online shopping sites like Amazon and other retailers.

They then need to analyze their spending and find expenditures that can be reduced or eliminated until their regular spending is less than their net income. A pen, paper and calculator are fine, but clients may want to use more savvy tracking services such as Mint.com or YNAB.com.

They may even want to stop contributing to retirement accounts until the credit cards are paid off. The reduction in interest expenses could more than offset the lost net tax deduction and future earnings earned on the retirement account deposits.

Once the clients have identified acceptable, affordable amounts and purposes for their spending, they should commit to carrying just enough cash to cover each week’s worth of those costs and then refilling their purses and wallets at the beginning of next week.

If the clients will panic without carrying some plastic, they can bring along a debit card for emergency use only.

The clients should visit their bank or credit union to discuss any solutions the institution can offer. That might include a lower interest rate on a new credit card account, to which the clients could transfer some or all of their other balances. Another option could be an unsecured “consumer” loan that would have a lower interest rate, longer payback period, or both.

The clients may even be able to get a loan against a paid-for vehicle that would have a much lower interest rate than what the credit card charges.

The effect of reducing the interest rate could be dramatic. For example, making $400 monthly payments on a $20,000 credit card balance charging 15 percent interest would take 80 months to zero out the balance. But at a rate of, say, 4 percent interest, that $400 payment will retire the debt in 56 months, saving the client over $9,500 in interest costs. Or, the client could choose to lower the monthly payment down to $290, still pay the $20,000 off in 80 months, and save over $8,600 in interest costs.

The lender may suggest that if the clients have established equity in their home, it may be best to borrow against that equity at a lower interest rate to pay off the credit cards. Borrowing against home equity will lower the interest rate and extend the prospective payment term, and the interest could be tax deductible.

A home equity line of credit is probably the least costly option, and allows the borrower to make interest-only payments (at first). But the interest rate will likely be adjustable.

If the clients want a loan with a fixed interest rate, they should request a home equity loan. But this would require them to begin making payments of principal and interest right away.

The most expensive upfront option is likely to be refinancing their mortgage. But this would also give them a fixed rate and the lowest possible minimum monthly payment, if they extend the new mortgage out to 30 years.

A word of caution, though: The clients should consider that if they default on money owed on credit cards it will be painful, but they could recover within a few years. Yet if they borrow against their home equity and can’t make the payments, they could lose their house.

It borders on blasphemy to pull money from long-term, tax-sheltered savings to pay off debt. But once you run the numbers for your clients, it may turn out to be a shrewd move.

Say the annual interest rate on the debt is 20 percent. That cost will be there every year until the debt is paid off. However, the taxes and any penalties associated with the early retirement account withdrawals are a one-time expense. And the client would still eventually pay taxes on the assets anyway, once the money is taken out in retirement.

There are several ways to access retirement accounts and still minimize those taxes and penalties.

First off, the “contribution” portion of Roth IRAs can be withdrawn at any time for any reason, with no penalties whatsoever.

Working clients may be able to get a loan from their 401(k) accounts that doesn’t require credit approval, and will likely have a much lower net interest cost than that charged on the credit card balances.

Pulling money from IRAs, at-work pre-tax retirement plans, and the “earnings” portion of Roth IRAs usually means the withdrawal will be taxed as ordinary income, and be hit with a 10 percent penalty if the client is under age 59 ½.

However, there may be other expenses incurred by the client (such as college costs or medical bills) during the calendar year of the withdrawal that may allow them to avoid the 10 percent penalty. For more information see Publication 590-B at www.irs.gov.