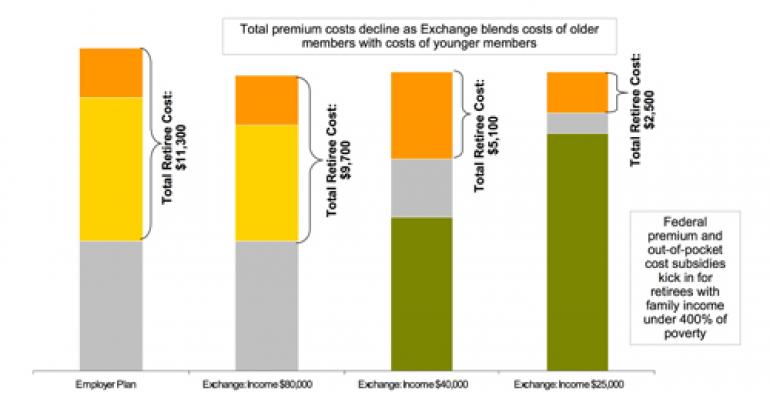 The Pros and Cons of the Healthcare Reform Law

The political battle over Medicare's future should concern any financial adviser helping clients plan for the cost of health care in retirement. But no matter how the fight ends, rising health care costs pose a threat to your clients' retirement security. And the new health reform law already is changing the health insurance market in important ways that will affect your clients' choices and expenses. Out-of-pocket medical costs are one of the most significant expenses faced by retirees. A 65-year-old couple retiring this year can expect to spend $230,000 over the rest of their lives, according to Fidelity Investments, which surveys retiree health costs annually. And that figure doesn't include long-term care, which can blow a hole in the side of any retirement plan. Medicare provides strong financial protection for basic health care services, but coverage gaps force beneficiaries to pay relatively high out-of-pocket costs. The Kaiser Family Foundation estimates that Medicare covers just 48 percent of total per capita medical and long-term care expenses. The major categories of out-of-pocket expenses, Kaiser reports, are insurance premiums (39 percent), long-term care (19 percent), medical providers (15 percent) and prescription drugs (14 percent).

The political battle over Medicare's future should concern any financial adviser helping clients plan for the cost of health care in retirement. But no matter how the fight ends, rising health care costs pose a threat to your clients' retirement security. And the new health reform law already is changing the health insurance market in important ways that will affect your clients' choices and expenses.

Out-of-pocket medical costs are one of the most significant expenses faced by retirees. A 65-year-old couple retiring this year can expect to spend $230,000 over the rest of their lives, according to Fidelity Investments, which surveys retiree health costs annually. And that figure doesn't include long-term care, which can blow a hole in the side of any retirement plan.

Health care costs are even more daunting for retirees younger than 65, who don't yet qualify for Medicare. “If I want to retire before 65 and I have health condition of any sort, it's not just that I can't afford an individual policy – I can't get coverage at all,” says Jane Jensen, a senior health care consultant at Towers Watson, the big employee benefits consulting firm.

The health care reform law will bring a mixed bag of good and bad news—with many of the changes affecting benefits provided to retirees by former employers. Here's a look at the key trends that will impact retiree health care spending.

The Affordable Care Act (ACA) boosts the value of the Medicare D prescription drug plan by closing the notorious “doughnut hole.” That's the coverage gap that starts when a beneficiary's annual drug spending hits $2,830, and resumes at the catastrophic level ($4,550). Fidelity estimates that about 30 percent of seniors enter the doughnut hole in any given year.

This year, pharmaceutical companies are providing a discount of 50 percent on brand-name drugs to low- and middle-income beneficiaries who find themselves in the gap. Then, the doughnut hole itself will shrink a bit every year, ultimately disappearing entirely in 2020. The doughnut hole reforms already are yielding results—Fidelity's survey this year reported an eight percent decline in overall health expense compared with last year, when lifetime health expenses for a 65-year-old couple were estimated at $250,000.

Many retirees receive their prescription drug coverage from former employers. But the ACA's improved benefits are motivating employers to consider moving retirees into Part D, says Jensen. Another key factor is that the ACA phases out a federal subsidy to employer plans that provided direct coverage.

“The employer probably will still provide a benefit, but maybe not a group plan,” she says. “They might simply provide a subsidy to offset the cost of a Part D plan.” Jensen expects overall benefit value to seniors will improve, even without direct employer plan sponsorship.

Workers who retire before age 65 – sometimes involuntarily – face some tough challenges replacing the group health coverage they enjoyed at work.

The ACA creates new public health insurance exchanges that will open for business in 2014. Their aim is to create competitive marketplaces offering individuals high quality, affordable coverage. At the same time, insurers will be barred from turning away applicants due to medical conditions, or charge them higher rates – although they will be able to charge up to three times the differential between the oldest and youngest insured in the plan. Finally, the ACA offers a combination of credits and subsidies aimed at keeping policies bought in the exchange affordable.

The latest annual survey of employer health plan sponsors by Towers Watson and the National Business Group on Health found that 48 percent of employers currently provide coverage for retirees younger than 65 and pay for part of it. But Jensen predicts they will start sending those workers to the new exchanges in 2014 – with an employer subsidy in hand--to purchase coverage.

One reason is that much better deals will be available in the exchanges. “If I'm an employer I see these are funding sources available to my retirees in the public exchange that I have no access to.” The ACA also phases out federal subsidies and tax breaks for employers on retiree health coverage, giving them further incentive to shift retirees to the exchanges.

Towers Watson projects that total annual coverage costs for retirees under 65 in the exchanges will fall dramatically (see chart).

Health Savings Accounts (HSAs) can help workers save money to offset health expenses down the road in the retirement. Created during the Bush years, HSAs have very attractive tax features: contributions and account growth are tax free—as are withdrawals, so long as the funds are used to pay for healthcare.

Unused funds can be rolled over from year to year, and the accounts offer IRA-like portability. HSAs permit total contributions up to $3,050 (individual) or $6,150 (family); the numbers are $1,000 higher for participants over age 55. And some employers make direct or matching contributions to employee accounts.

HSAs are gaining ground among workplace plan sponsors, mainly because they are tied to high-deductible insurance plans that reduce premium costs up to 30 percent. About 27 percent of retiree plan sponsors offer an HSA option, according to the Towers Watson/National Business Group on Health survey. But 25 percent of companies plan to convert their current retiree health coverage subsidy in the coming year.

But the jury's still out on HSAs as a retirement saving vehicle. Most participants use the accounts to fund current-year expenses, since insurance plan annual deductibles linked to HSAs must be at least $1,200 for individuals, or $2,400 for family coverage. And the deductibles can run much higher. As a result, Fidelity says only 24 percent of HSA accounts at plans it administers are used for long-term saving.

And, since HSAs have only been on the scene a few years, average account balances are quite small, averaging $1,355 in 2010, according to the Employee Benefit Research Institute.

The ACA levies steep Medicare premium increases on the most affluent seniors to help fund the overall cost of reform. This year, the surcharges affect individuals with $85,000 or more in annual income, and joint filers with income over $170,000.

Income-based Medicare premiums got started before health reform—the most affluent seniors have been paying higher income threshold premiums since 2007 for Medicare Part B (doctor visits and outpatient services). But until now, the income threshold was indexed to inflation annually to keep level the percentage of beneficiaries subject to the surcharge. The ACA freezes the threshold at 2010 levels through 2019, starting this year. The ACA also extends the income threshold formulas to seniors enrolled in Part D prescription drug plans.

The changes will affect just five percent of Medicare enrollees this year, although that figure will rise to 14 percent by 2019 as more seniors jump past the frozen income threshold levels, according to the Kaiser Family Foundation, a non-profit health policy and research organization.

High-income seniors who pay both Part B and Part D premiums could see their combined premiums rise anywhere from $300 to $700 per month by the end of the decade, according to Juliette Cubanski, associate director of Kaiser’s Medicare Policy Project. “That’s a considerable sum, considering that the base Part B premium for most people this year is $96.40,” she says.

The new income thresholds also affect people who choose a Medicare Advantage plan (Part C). These are privatized managed care plans that replace traditional Medicare, and usually incorporate prescription drug coverage. Advantage enrollees typically pay the monthly Part B premium plus a supplemental premium to the Medicare Advantage plan; now, these premiums are being adjusted to factor in the higher-income amounts for Part B and Part D coverage, where applicable.