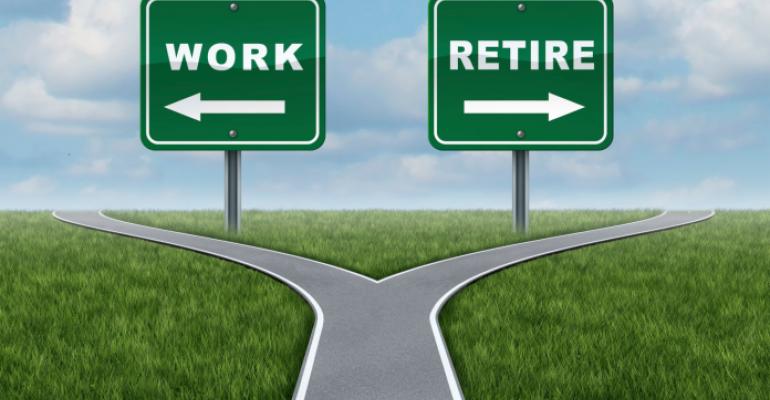 The fastest growing segment of the labor force is workers over the age of 65. But even if your clients have no intention of retiring, you can still help them get the most out of earned benefits. Here’s how.

A friend called recently to ask if I could recommend a financial planner. Although he recently turned 70, he hasn’t pulled together a retirement plan; he works full time, doesn’t plan to retire anytime soon and just hasn’t made the time to think about it. I recommended someone, but then asked if he's at least filed for Social Security. He admitted he hadn’t given it a minute’s thought.

Since he’s past the age when additional Social Security credits can be earned through delayed filing, my friend is leaving money on the table - and his situation isn’t unusual, according to Richard Kaplan, a professor at the University of Illinois College of Law who recently published an article on financial planning for non-retirees in The Elder Law Report. "Many people who are not planning to retire at the typical age don't think they need to pay any attention to retirement planning. But they do need to take a look at it, to decide if they need to take certain steps now instead of later. It's a rather counter-intuitive point."

It’s a situation that advisors will be confronting more frequently in the years ahead. Sure, Americans are working longer - we’ve all heard about that ad nauseum.But some are working well past traditional retirement age. The fastest-growing segment of the labor force is workers over age 65, according to the U.S. Bureau of Labor Statistics - and the growth is especially pronounced among workers over age 70.

With all this in mind, here’s a checklist of key retirement planning items advisors should keep in mind for their non-retired, older clients.

Working longer is a great way to get the most out of Social Security. Benefits are calculated using a formula called the primary insurance amount, or PIA. Seniors who wait to start receiving Social Security until their full retirement age (currently 66) receive 100 percent of PIA; taking benefits at 62, the first year of eligibility, gets them only 75 percent of PIA. By waiting until age 70, they'll receive 132 percent of the PIA – nearly double the monthly income for the rest of their lives. Those benefits are enhanced by an annual cost-of-living adjustment, which is added in for years of delayed filing.

For clients working in their 60s, there’s very little sense in filing early. Earlier filers who have income from work in 2013 of more than $15,120are hit with a penalty (Social Security defines “income” in this context as wages from employment or net earnings from self-employment). If earnings exceed the limit, $1 will be deducted from benefit payments for every $2 earned over that amount. The withheld benefits are added back into benefits after your client reaches full retirement age. After that age, they can have unlimited income and receive Social Security benefits without penalty. For 2014, the earnings test limit is $15,480.

One possible exception, Kaplan notes, is someone with short life expectancy. “If you’re 62 and the doctor has just told you that you won’t live much longer, you might want to file to get part of what’s coming to you. But if you have a surviving spouse who will be getting a survivor benefit, you probably still don’t want to do it,” he adds.

Likewise, there’s no reason to wait beyond age 70, even for people who are still working, since credits stop accruing at that age.  However, it’s important to keep an eye on taxation of Social Security. Benefits are taxed using a “provisional income” formula that is determined by adding together adjusted gross income, tax-exempt income and half  of the Social Security benefit. If that total exceeds $25,000 for individuals ($32,000 for married couples), then 50 percent if the excess must be included in income for tax purposes; if it’s over $34,000 ($44,000 for couples) then 85 percent of the excess is included in your income. Michael Kitces, director of research at Pinnacle Advisory Group, offers this analysis of Social Security taxation.

Leaving Social Security money on the table is bad enough - but a Medicare filing mistake can be error that keeps on taking for the rest of your client’s life. Doing it right requires understanding - and navigating - a complex set of rules.

“Decisions that people make about Medicare when they first become eligible are by far the most important and most complicated,” said Paula Muschler, operations manager for Allsup Medicare Advisor, a Medicare plan selection service. “They not only can face significant penalties but also risk being without coverage if they don’t correctly coordinate benefits.”

Medicare eligibility begins at 65, and sign-up is automatic if your client already receives Social Security benefits. If not, it’s important to sign up sometime in the three months before turning 65th birthday up through the three months following, because failing to do so can lead to expensive premium penalties down the road. (Although signup can be done up until three months after the 65th birthday, but there’s a waiting periodfor people who don’t enroll by the end of the month that they turn 65.)

Monthly Part B premiums jump 10 percent for each full 12-month period that a senior could have had coverage but didn’t sign up. That can really add up: a senior who fails to enroll for five years ultimately would face a 50 percent Part B penalty–10 percent for each year. Penalties also are applied to Medicare Part D (prescription drugs) and Medicare Advantage plans (Part C) that include drug coverage.

How about a client who is planning to work past age 70? She can delay starting Medicare without penalty if she is insured based on her active work status by an employer with more than 20 employees. In those situations, the employer’s health coverage is primary, so she could  postpone filing for Parts A (hospitalization) or B (outpatient services), though many choose to enroll for Part A anyway because it doesn’t require premium payments. Seniors can enroll in Part B later on without penalty for up to eight months following loss of group health coverage.

Some experts advise signing up for Part A at age 65 even for people who continue to work, since there is no premium. One caveat to consider:people enrolled in a health saving account (HSA) should proceed with caution because they cannot make HSA contributions once they are enrolled in Medicare.

If you are already receiving a Social Security benefit you will be automatically enrolled in Medicare Part A and Part B. If you want do opt to postpone enrollment, it’s wise to notify Medicare at age 65 of your decision in order to ensure that there won’t be problems with premium penalties at a later time. This can be done by checking off a box on the back of a Medicare card that has been sent, by calling the Social Security Administration, or by going to the SSA website.

If your client’s employer has fewer than 20 workers, or if she is self-employed, she should sign up for Medicare at 65.

Required Minimum Distributions (RMDs) must be taken from Individual Retirement Accounts (IRAs) starting in the year your client turns 70.5 – and from 401(k)s at the same age, unless she is working for the employer that sponsors the plan.

For older clients who are still working at this age, RMDs are just one of several moving parts in the income picture, along with wages, Social Security, interest income and a traditional pension from a former employer, if any. “The entire tax-deferred superstructure was built on the idea that you’ll be in a lower tax bracket in retirement than when you were working,” Kaplan says. “But that may not be the case for these folks,” he says. He notes that the top marginal rate is now 39.6 percent for individuals next year with income over $406,750 and joint filers over $457,600. That’s a whole lot of ordinary income - but it’s not difficult to imagine seniors with income in the 28 percent or 33 percent brackets who might have otherwise paid less tax if they weren’t working.

Working seniors also may find themselves paying Medicare’s high income premium surcharges. The surcharges are applied to Part B, Part D (prescription drugs). They affect individuals with more than $85,000 in annual income and joint filers with total annual income of more than $170,000. The surcharges start at $42 per month, and run up to $231 monthly for the highest income seniors.

One plus for working seniors is that RMDs don’t have to be taken from the 401(k) of a current employer. Am RMD must be taken from each of any older 401(k)s at former workplaces, and one way to minimize RMD obligations is to roll over those accounts to the current 401(k). Consolidation also brings simplicity, Kaplan notes. “You only have one plan to deal with, fewer statements and easier asset allocation.” But he notes consolidation makes sense only if the plan features of the current plan merit a rollover. “Do you like the investment options in the 401(k), and are the fees reasonable?”

Other options for minimizing RMDs are few. One that is available – at least for 2013 – is the qualified charitable distribution (QCD), which lets you make cash donations up to $100,000 to IRS-approved public charities direct from an IRA. (QDCs from workplace plans aren’t allowed.) The gifts can be counted toward an RMD and are excluded from taxable income.

This tax shelter has been on the congressional chopping block for some time and isn’t expected to be extended for 2014.

Another option is converting IRAs assets to a Roth IRA, which generates an income tax liability in the year of conversion, but removes RMD obligations in future years while your client is living. For that reason, they’re especially useful for people who want to pass on IRA assets to heirs (who will have to take RMDs). In the case of working seniors, however, the attractiveness of Roth conversion depends very much on on your client’s individual tax situation in any given year.

“The Roth conversion strategy could be a major income tax hit at conversion in exchange for lighter taxation and no RMDs in the future,” Kaplan says. “There are numerous tax-related variables at play even assuming that the government does not change the tax treatment of Roth accounts in the future. In any case, the conversion strategy is most appealing to taxpayers who are already in the top bracket or who can manage their conversion amounts over several years to avoid moving into higher tax brackets.”