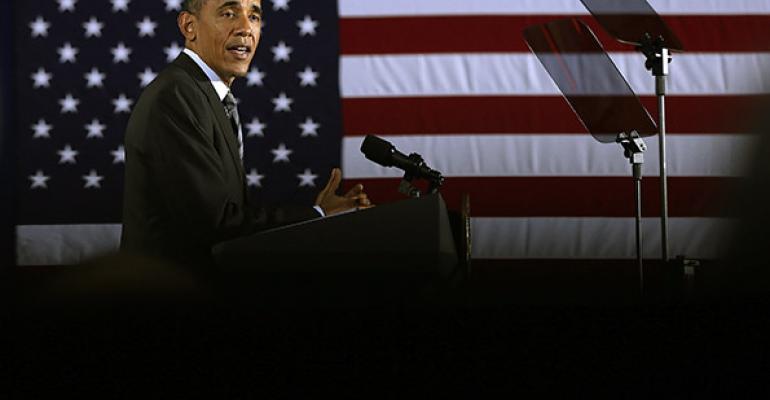 (Bloomberg) -- President Barack Obama on Wednesday called for an increase in Social Security benefits for the elderly as he hit the road with a speech that previewed his role as campaigner-in-chief for Democrats ahead of the November election.

The president’s comments mark a reversal after he sought a bipartisan deal five years ago that would have cut Social Security and move the Democratic Party toward a unified stance on the nation’s cornerstone retirement program.

"It is time we finally made Social Security more generous and increase the benefits so that today’s retirees and future generations get the dignified retirement that they have earned," Obama said in Elkhart, Indiana, during a speech in which he spoke against Republican economic policies.

Obama has no specific proposal in mind for a benefits increase, said a White House official who asked for anonymity. Obama didn’t say in his speech how much he wants to raise benefit levels or offer a timetable.

With the shift, the president joins likely Democratic presidential nominee Hillary Clinton, who embraced the idea of expanding Social Security earlier this year, and her challenger, Vermont Senator Bernie Sanders, a longtime champion of expanding the program. Obama’s remarks nudge the party toward a more liberal agenda and represent a nod to Sanders and his supporters.

"Retirement insecurity is an obvious problem for middle- and low-income families and both Social Security and Medicare are highly efficient programs," said Jared Bernstein, a former Obama White House economic adviser and now a senior fellow at the Center for Budget and Policy Priorities. "It took a while, but I think Democrats have come to realize that defending, strengthening, and even expanding these security-enhancing programs is what makes them Democrats.”

Obama’s speech included broadsides against the policy proposals of presumptive Republican nominee Donald Trump and those of House Speaker Paul Ryan of Wisconsin.

"It’s almost as though the president is trying to sound like Bernie Sanders," AshLee Strong, a spokeswoman for Ryan, said in an e-mail.

Obama’s evolution also reflects a shift in the politics of Social Security. In 2012, Obama and Republican nominee Mitt Romney were both open to long-term reductions in Social Security spending. In 2016, all remaining major presidential candidates oppose that idea. Trump has campaigned on a promise not to cut Social Security.

The president’s new position on Social Security has been several years in the making. In 2011, after Democrats were walloped in mid-term elections, Obama sought a deal with then-House Speaker John Boehner that would have, among other things, slowed the growth of future benefits. In 2014, Obama dropped the policy from his budget proposal; the White House at the time blamed Republicans for "a lack of willingness to negotiate on a deficit reduction deal."

Obama Wednesday proposed to pay for the expansion by "asking the wealthiest Americans to contribute a little bit more." The president previously has supported lifting the cap on wages subject to Social Security’s payroll tax, currently $118,500, to increase the program’s revenues.