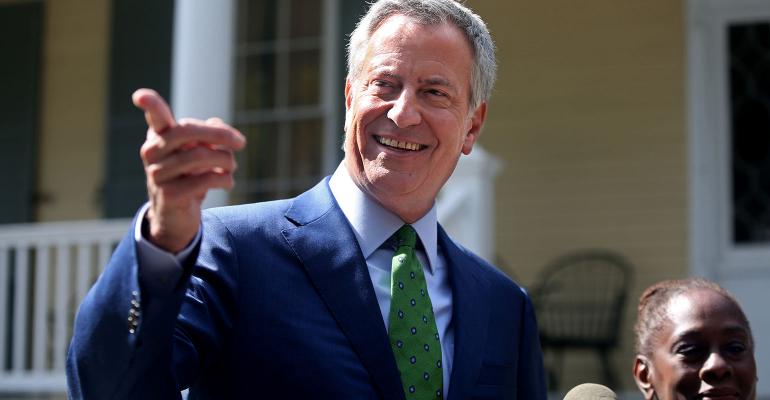 City Council members began hearings Monday on the proposed retirement plan, which would start in 2021.

(Bloomberg) -- Days after ending his long-shot campaign for the Democratic presidential nomination, New York Mayor Bill de Blasio signaled his intention to keep pressing for progressive policies by calling for a city law creating a government-sponsored retirement savings plan for workers whose companies don’t offer one.

The proposal, modeled after private 401k or IRA savings plans, is consistent with themes de Blasio raised during a short-lived presidential candidacy, when he focused on redressing income inequality with programs that would provide universal health care, universal pre-kindergarten, paid sick leave, a $15 minimum wage and required paid vacation. While New York would be the first city to offer such a retirement program, Oregon offers a similar state-run plan, the mayor said.

“I felt like I raised some really important issues and we’re going to keep working on those issues,” de Blasio said about his decision to stop campaigning for president, after failing to raise money from enough donors to qualify for the Oct. 15 televised debate.

City Council members began hearings Monday on the proposed retirement plan, which would start in 2021. The program would be voluntary for anyone working at least 20 hours a week and automatically withhold at least 3% of a paycheck, with investments run by a third-party administrator chosen by the city. Businesses that already offer retirement savings plans would not be eligible to enroll in the city’s. The plan would impose no cost on employers and workers would retain their accounts when changing jobs.

About 57% of New Yorkers lack access to a retirement plan, creating a potential market of more than 1 million workers who could enroll, de Blasio said. An employee earning the city’s median wage of $50,850 a year who saves 5% annually earning 4% a year could save $146,274 after 30 years, the mayor’s office said in a news release.

To contact the editors responsible for this story:
Flynn McRoberts at [email protected]
William Selway, Michael B. Marois