Bill Bengen talks in depth about how he first developed his safe withdrawal rate research and how the 4% rule became a rule of thumb. 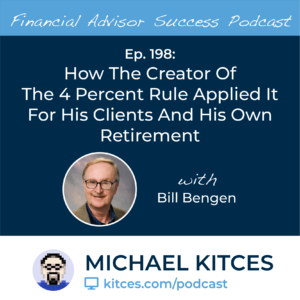 Welcome back to the 198th episode of Financial Advisor Success Podcast!

My guest on today’s podcast is Bill Bengen. Bill is the former owner of Bengen Financial Services, an independent RIA based in Southern California that oversaw nearly $50 million of assets under management for 80 affluent retirees.

What’s unique about Bill, though, is that he’s also known as the father of the 4% rule and the progenitor of the research that we now know as safe withdrawal rate, research that he not only published in a series of studies in the Journal of Financial Planning and a subsequent book but also put into practice with his clients as a financial planning practitioner.

We also talked about Bill’s own path as a financial planner, how he career changed into financial planning after first studying aerospace engineering and then spending his first career running the family soda bottling business, how a faithful media mention of NAPFA led Bill to launch his business from the start as an independent RIA in the early 1990s when it was not yet popular to do so, and how Bill was able to get traction in his early marketing as one of the only fee-only financial planners in his area, and why Bill decided from the start to maintain his firm as a lifestyle practice with no more than about 80 clients at any particular time.

And be certain to listen to the end where Bill shares what led him to ultimately decide to retire and sell his firm, why he believes the safe withdrawal rate today could be as high as 5% given the low-inflation environment, the reason Bill currently maintains a very conservative portfolio for his own assets as a retiree and why Bill thinks that advisors should be more tactical with the asset allocation for their own retired clients.

So whether you’re interested in learning about how Bill transitioned from studying aerospace engineering to financial planning, how he became an early proponent of the fee-only model or whether the 4% rule still applies, then we hope you enjoy this episode of the Financial Advisor Success podcast.