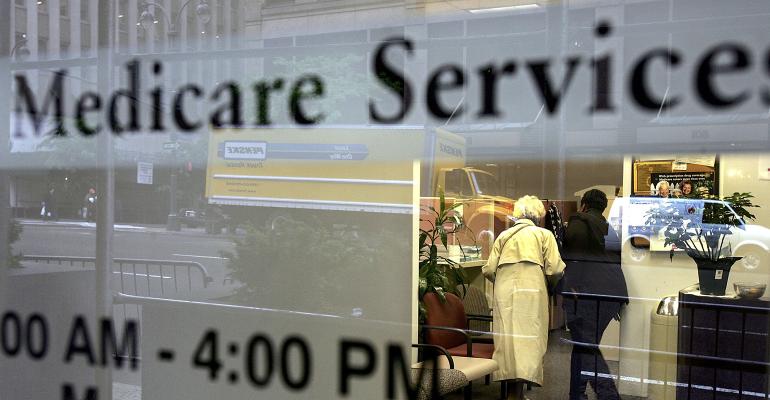 Health care cost is one of the most important “X” factors in client retirement plans—and it’s getting harder to quantify.

The future direction of health insurance has become very cloudy. Consolidation of Republican power in Washington has put health reform on the front burner; most pressing is the repeal and replacement of the Affordable Care Act (ACA). Still, Medicare reform could be on the agenda as well. House Speaker Paul Ryan is intent on moving forward with Medicare reforms that include vouchers, higher eligibility ages and more that will add up to shifting risk and cost to seniors.

A higher Medicare eligibility, combined with ACA repeal, would be toxic for the health coverage of Americans over age 65, who today are almost universally covered by Medicare. A recent actuarial analysis considered the impact of increasing Medicare’s eligibility age to 67, coupled with various ACA reform scenarios. The study projects coverage rates for people age 65 and 66 for a single year—2019. It concludes that the uninsured rate would jump to 19 percent if the ACA remains intact; if it is repealed, that number would soar to 37 percent.

Those are eye-popping numbers, but the impact of an ACA repeal wouldn’t be limited to 65 and 66-year-olds. The ACA has had a major impact on older Americans still too young for Medicare who don’t have access to employer-sponsored insurance. The law limits the ability of insurers to set premiums based on age, and doesn’t permit them to turn away policy buyers due to pre-existing conditions.

“The law has helped people build retirement security by bringing down out-of-pocket costs," says Joe Baker, president of the Medicare Rights Center. “Many older people covered under the ACA exchanges wish the deductibles and copays were more affordable, but they also know that the alternative before the law was passed was no coverage whatsoever. Now, it’s possible to budget for healthcare for every year until you become eligible for Medicare.”

In 2013, before the ACA was in full force, 14 percent of workers aged 55-64 were uninsured, according to The Commonwealth Fund. That percentage dropped to 9.1 in 2016, meaning there were 3.1 million previously uninsured people who now had health insurance. Adults in this age bracket have the lowest uninsured rates of any age group, Commonwealth reports. The foundation’s research also finds that the ACA helps people bridge coverage gaps when they temporarily lose employer-based insurance.

At this writing, we don’t know what would replace the ACA. However, most Republican plans advanced to date would eliminate the premium subsidies and at least loosen the restrictions on pricing policies by age and health.

Meanwhile, the GOP’s Medicare reform ideas would put in motion a long-term shift of health care cost risk from government to beneficiaries on an unprecedented scale. Most of these reforms would be phased in gradually, probably affecting future beneficiaries more than today's enrollees.

The best-known idea is “premium support,” a plan long championed by House Speaker Paul Ryan, R-Wis., which would replace today's defined set of promised Medicare benefits with an annual voucher.

Medicare enrollees could buy health insurance from among various competing plans, which could include both traditional Medicare and plans offered by commercial insurance companies. The federal government would pay part of the cost of the coverage through an annual payment, or voucher.

"It's a bit like the difference between a defined benefit and defined contribution pension plan," says Paul Vanderwater, senior fellow at the Center on Budget and Policy Priorities. "The guarantee is a certain dollar amount that could be used to buy a plan, but no longer a guaranteed benefit."

The private market option sounds like today's Medicare Advantage program, but it could differ in important respects. Advantage plans must offer the same defined set of benefits that traditional Medicare delivers; it's not certain that would be the case with premium support.

One major difference actually may be in the traditional fee-for-service program. There, payments would be capitated—different from the current system, which usually ties payments to the services that beneficiaries use.

The impact on enrollees in terms of premiums is highly uncertain; the Congressional Budget Office (CBO) attempted to model the impact of premium support in 2013. It found that premiums could be higher or lower compared with the current system, depending on how the system is designed. The same is true for out-of-pocket costs—the outcomes would depend very much on how the annual voucher is set.

"It would play out differently for people based on where they live and the insurance choices they make," says Tricia Neuman, director of the program on Medicare policy at the Kaiser Family Foundation.

Most Medicare reform plans that have been circulated in Washington phase in changes slowly, grandfathering in today's beneficiaries and those close to retirement. Workers younger than age 55 likely would enroll under the new plans.

Still, there is uncertainty about how any new system would be phased in; Neuman thinks a premium support system could impact seniors already on or about to be on Medicare. If younger seniors shift into a new premium support system, and the traditional Medicare risk pool gets older, sicker and more expensive, "traditional Medicare could experience a death spiral, unless adequate safeguards are in place," she says.

The Heritage Foundation has proposed increasinging the eligibility age for Medicare from 65 to "at least 68" over a period of 10 years, and then indexing it to life expectancy. The argument is that rising longevity forces Medicare to stretch its resources over much longer lives.

From a practical standpoint, a higher eligibility age would leave an open question on where workers in the 65-67 year age group who are retired or jobless would find health insurance while they wait—especially in light of possible repeal of the ACA.

The financial risk of higher Medicare eligibility ages for average households would be crushing, argues Henry J. Aaron, a longtime health economist at the Brookings Institution. He calculates that even if a subsidized market exchange policy were made available to these newly uninsured (using the ACA’s current subsidization structure), a couple at age 65 living in Florida with an income equal to four times the federal poverty level, $62,920, would face an insurance bill equal to roughly one-fourth of income.

"There is no good argument for raising the age of eligibility for Medicare," Aaron says. "The fact is, most people retire for good or ill before the current eligibility age (65). You might argue that you want people to stay in [the] labor force longer and use fear of lost health insurance, but that's a very rough way of going about encouraging people to remain in [the] labor force."

Aaron also argues that any savings for the Medicare program would be small, since younger seniors are healthier.

Another Medicare reform idea percolating in the background goes by the label “simplification.”

The idea here is to combine Medicare Parts A and B into one program, with a single deductible and uniform coinsurance. This would be coupled with reform of the Medigap supplemental insurance program, and the addition of catastrophic protection—one of the most important weaknesses in Medicare.

This year, the Part A deductible is $1,316 per benefit period, which covers a beneficiary's share of costs for the first 60 days of inpatient hospital care. After that, beneficiaries pay coinsurance of $329 per day for days 61 through 90, and $658 daily after that. Meanwhile, most Part B enrollees pay a monthly premium of $109.

Simplification proposals would mean a single annual deductible somewhere in the middle—perhaps $500 or $600, with a cap on out-of-pocket hospitalization expenditures.

For many beneficiaries, this would mean higher out-of-pocket costs, since "most Medicare beneficiaries don’t end up in the hospital," as Vanderwater notes.

This means Medigap plans would be rendered far less compelling. About 20 percent of beneficiaries now use these supplemental plans to protect against catastrophic costs and cover copays and deductibles; premiums run a bit over $2,000 per year, on average.

Simplification aims to improve Medicare's finances through the higher deductible, and by reducing healthcare utilization. The argument here—advanced by a variety of policymakers—is that because Medigap covers most cost-sharing requirements, the incentive for patients to weigh carefully the need to access care is reduced.

All of these changes loom as healthcare costs are projected to rise. The Employee Benefit Research Institute (EBRI) recently updated its estimates for the amount retirees need to have saved at age 65 to meet lifetime Medicare premiums (Part B and D, plus Medigap). EBRI increased its projected saving targets for various modeled scenarios as much as six percent, citing rising out-of-pocket spending on prescription drugs as the main driver.

So, buckle your seatbelts—and advise your clients to do the same. Says Neuman:

“For the next couple of years, I’d expect a great deal of uncertainty.”