/sites/all/themes/penton_subtheme_wealthmanagement/images/logos/footer.png
Recent
Recent
Nine Must Reads for the CRE Industry Today (Nov. 29, 2022)
Nov 28, 2022
Is the Retail Reckoning for Regional Malls at an End?
Nov 28, 2022
Making Client Reporting the Center of Your Client Experience
Nov 28, 2022
Kroger, Albertsons CEOs Will Testify Before Senate About Merger
Nov 28, 2022
Featured
The 10 Best and 10 Worst States in Which to Retire in 2021
Jul 15, 2021
I’m an Advisor. This Book Changed My Life
Aug 31, 2022
Fifteen Must-Listen Business Podcasts for Advisors
Aug 14, 2020
Celebrity Estates: Jay Leno and Planning for Classic Car Collections
Feb 22, 2022
Retirement Solutions With Annuities
brought to you by 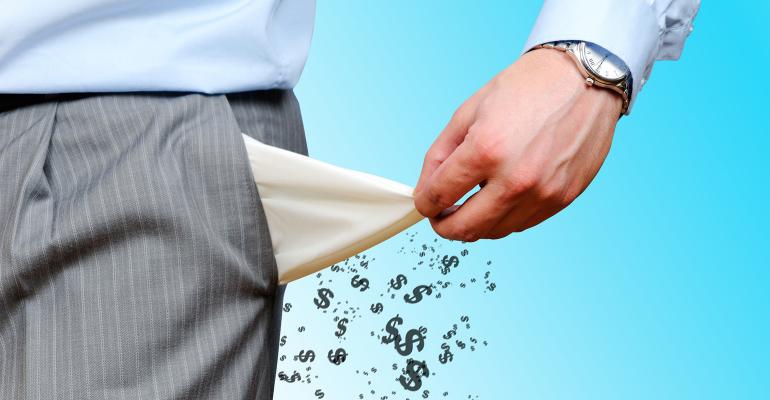 Make Six Figures? There's a Decent Chance You've Got Almost Nothing in the Bank

(Bloomberg) -- It's hard to feel sorry for someone making six figures, but a new survey attempts to drum up some sympathy for the deflated bank accounts of these high rollers. Close to half of those who earn from $100,000 to $149,999 a year have less than $1,000 in their savings accounts. Some 18 percent of them have socked away absolutely nothing.

The study, from financial services website GoBankingRates, found that those who earn over $150,000 annually don't fare much better: Some 29 percent have less than a grand in their savings, and 6 percent have nothing saved at all. The study surveyed 7,052 Americans in early August.

"It doesn’t matter if they are making $30,000 per year or $300,000—people don’t seem to know how to spend less than they make," financial planner Michael Hardy said in response to the study's findings.

Those who have the hardest time saving are low-income workers, whose basic living expenses outweigh their wages, making it more difficult to save. Only 11 percent of those earning less than $24,999 annually had more than $10,000 in their savings accounts. The majority, 38 percent, had saved $0, and 35 percent had less than $1,000 in savings. For those making between $25,000 and $49,999, 72 percent had either nothing or less than $1,000 in savings accounts.

There is a bit of good news in the study. Older millennials—those aged from 25 to 34—were slightly better at saving than their Generation X counterparts. While 10 percent of Generation Xers had from $5,000 to $9,999 in the bank, 13 percent of older millennials had saved as much, notwithstanding their shorter time in the work force.

Boomers, who have had longest to save, blow other generations out of the water, with 23 percent having saved more than 10 grand. Just 8 percent of young millennials can say the same. You can't really fault them for it; crippling student debt can make it pretty difficult to sock money away.