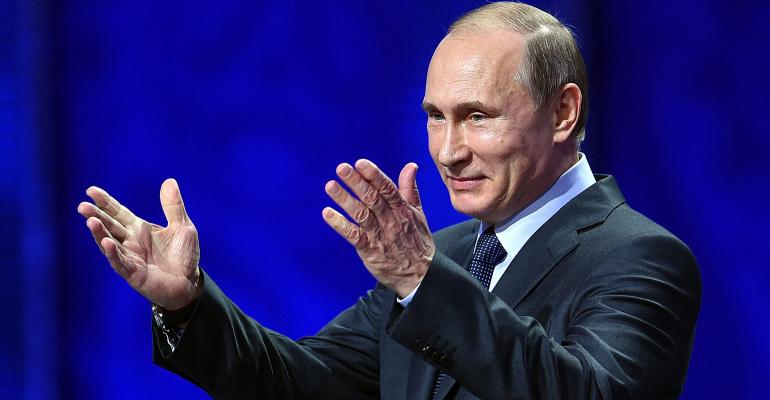 The Kremlin Thinks Five Years of Retirement Is Plenty

Russia announced plans to raise the retirement age for men to 65 and for women to 63.

By Evgenia Pismennaya and Ilya Arkhipov

(Bloomberg) --Vladimir Putin promised Russians this week that he would make retirement richer. What he didn’t say was that he’s going to make it shorter, too.

The Kremlin and the government have agreed on the outlines of a plan that would see the retirement age for men raised by five years to 65 and for women by eight to 63, according to two people familiar with the preparations who spoke on condition of anonymity to discuss confidential matters. The changes could begin as early as 2019, phasing in over a period of five years or more.

The current ages are among the lowest in the developed world, but Russia also lags in life expectancy, especially for men, currently 68. By 2024, when the pension-age increase could be fully imposed, government forecasts put life expectancy at only 70 for men and 80 for women. The resulting five-year retirement period for men would be among the shortest in the developed world, according to a Russian government institute. Officials say the long-awaited but politically unpopular change is vital to rein a ballooning funding shortfall for the government pension plan as the population ages and to stimulate growth by making Russians work longer.

With the working-age population forecast to shrink over the coming decades, the burden of paying pensions could force either major increases in taxes and government borrowing or cuts in payouts, which now average only about a third of wages. But the Kremlin has for years put off changing the system for fear of a backlash, especially among the older voters who are a key constituency of President Vladimir Putin.

Thursday, he told a national call-in show that the government is working on a plan to raise retirement ages but that “I have always viewed this with the highest level of caution.” He tried to sweeten the pill, saying that the goal of any reform would be “to raise the living standards and incomes of pensioners.”

The existing system requires subsidies of about 2 percent of gross domestic product every year to cover the shortfall between contributions collected and benefits paid. The forecast by the government institute earlier this year said that would rise to 3.6 percent by 2050 without changes to the system. By the mid-2030s, the number of pensioners is expected to exceed the working-age population, the study said. As many as a third of Russians retire early, thanks to special benefits for the military and police, as well as professions ranging from miners to dancers.

“We need to make a decision on the pension age,” Prime Minister Dmitry Medvedev told parliament last month. “The existing framework was set a long time ago -- the 1930s, when the life expectancy was about 40 years. Life in the country has changed since then.”

Important details of the reform, such as the length of the transition period and how much to limit early-retirement options for certain categories of workers haven’t yet been agreed. The final version of the plan -- to be discussed at government meetings next week -- will need parliamentary approval and could see further changes in negotiations with legislators this summer.

“Putin will pretend he didn’t make the decision,” said Evgeny Gontmakher, a former government official. “If something goes wrong, he’ll change it and lower the age and everyone will be happy.”

Russia’s RBC newspaper first reported the plans Thursday. A spokeswoman for the government declined to comment. The retirement ages could be increased by as much as one year every year, according to the officials familiar with the plans. The planned reforms would mean the pension fund’s shortfall, now 3 percent of GDP, would narrow to 2 percent by 2024, instead of widening to as much as 6 percent by that time if no changes are made, according to a forecast from Gazprombank released Friday.

Reducing the retirement period would also help offset the shrinkage forecast in the workforce as Russians age, one of the main obstacles to faster economic growth. If current trends continue and no changes are made to the pension age, the working-age population will shrink by 4 million over the next six years, while the ranks of pensioners will increase by 3 million, according to Gazprombank.