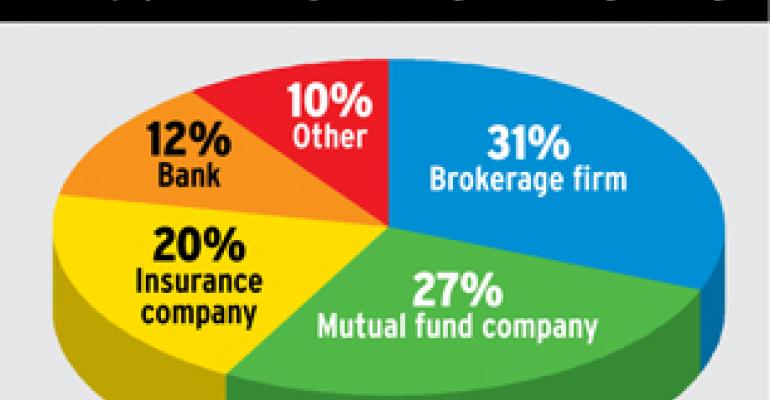 Providers of income securities for retirees and those close to retiring may have their work cut out for them, according to new findings by Cogent Research.

Providers of income securities for retirees and those close to retiring may have their work cut out for them, according to new findings by Cogent Research. Sixty-three percent of those polled by the firm said they either don’t own or don’t plan to own retirement income products, and yet many of them said they did own products that would fall into this category, suggesting a “woefully ill-informed” investor population, says Cogent.

Possibly more worrying for providers: none of them is perceived as a market leader. When asked which of eight brokerages were best at helping investors manage and invest retirement income, the top answer was, “Don’t know,” at a resounding 26 percent (Fidelity Investments placed second at 10 percent.)

“With all the time and money providers are spending on this focus on retirement and retirement income, we were really surprised to see there weren’t a few firms bubbling up to the top as leaders,” says Carrie Merrick, Cogent’s senior project director. It’s an important subject for brokerages that may be managing a client’s money for years prior to the client’s retirement, and would want to keep doing so afterward.

When asked what they were looking for in a retirement-income provider, most investors said somebody they already were working with and liked; “retirement expertise” was further down the list. If investors are relying on their providers merely because of the length of the relationship, Merrick reasons, that should provide opportunities for other providers to make inroads by offering superior services. “It’s an open playing field,” she says.

Ron Fiske, executive vice president for product management and development at Fidelity Institutional, says the task of “decumulating” assets as income in retirement is a very different process from the accumulation of assets that investors and advisors often focus on as they try to reach goals such as funding a college education or buying a house. “It still represents a huge challenge,” Fiske says.

Part of the challenge is that investors are generally reluctant to surrender control over their assets, a move that’s often required if they want to transition those assets to forms that produce income. The favored income product among the survey respondents was bond or CD laddering. Merrick said investors appear to be looking more for help with processes that would solve their income problems, rather than just buying products. “We did find a lot of people that think they can do that on their own. While it does offer up an opportunity for advisors, it might not come until people try it on their own and realize, ‘Maybe this isn’t as easy as I thought,’” she says. “That’s where the financial advisor comes in.”

According to a Penton Media survey (a unit of this publication), financial advisors appear to be more interested in selling insurance products to help their clients get through the retirement years. The Cogent survey also found that pre-retirees are more interested in working through at least part of their golden years, and perhaps selling their house or other real estate sooner than an older generation of retirees would, the Cogent study says. That suggests opportunities for advisors and producers, if they can overcome the apparent unfamiliarity of investors with the range of retirement income offerings, Fiske says. “At heart I’m an optimist, but there’s going to be a fair amount of headwinds in this. Our work isn’t even close to being done. We still have a lot of wood to chop as an industry.”

Nearly 1,000 retirees and pre-retirees age 55 and up responded to Cogent’s web survey, conducted in December. Both groups had at least $100,000 in investable assets. The survey had a sample error of plus/minus 3.16 percentage points.